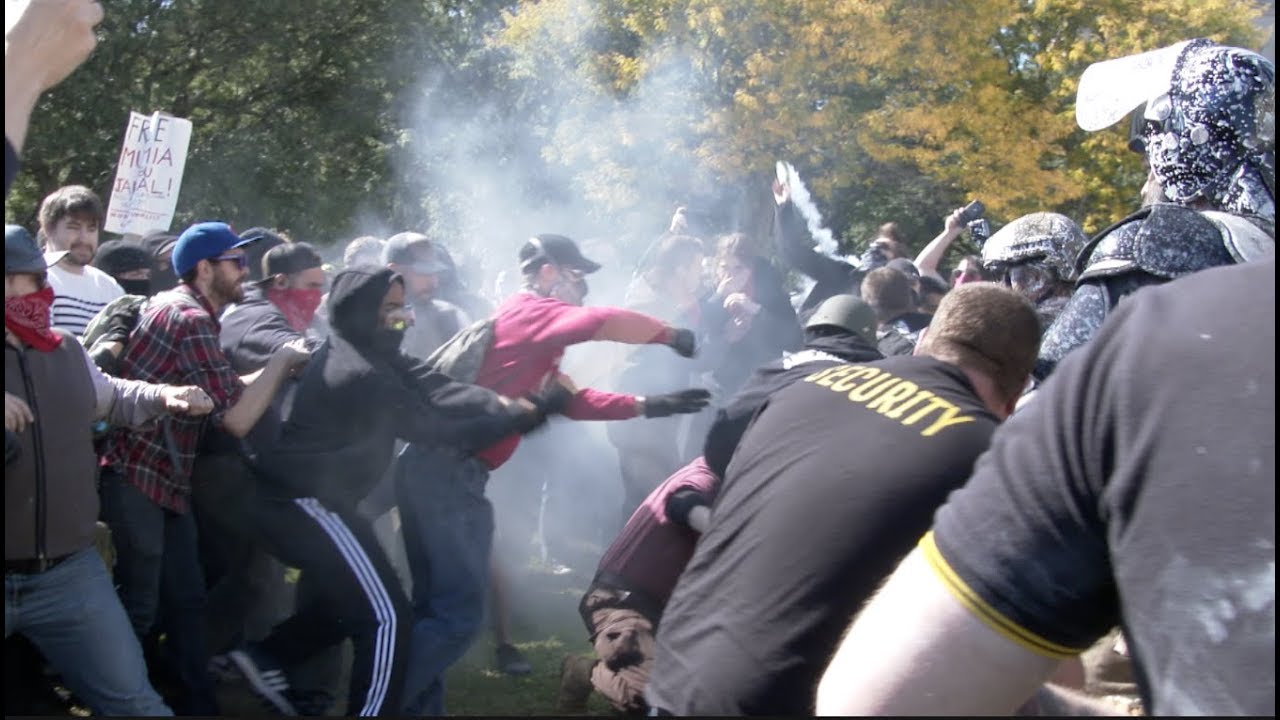 The liberal news outlet ThinkProgress claimed that there is “no evidence of equivalent violence” between members of the far-left group Antifa and the far-right Proud Boys at a couple of violent encounters in recent months.

“Members of the Proud Boys have been arrested for the violent attacks, but there’s no evidence of equivalent violence by Antifa organizations,” reads a Nov. 11 piece by ThinkProgress.

Both Proud Boys and Antifa members were arrested for violent acts perpetrated on the night of one incident, and video footage from both incidents shows the two groups engaging in assault.

ThinkProgress recently published a piece that discusses PayPal’s move to ban the Proud Boys from its services. The Proud Boys are a fraternity of self-described “Western chauvinists” started by Vice Media co-founder Gavin McInnes.

Antifa – short for anti-fascist – is a group that practices the “radical pan-leftist politics of social revolution applied to fighting the far-right,” according to Mark Bray, a Dartmouth College lecturer who has studied the group. “Its adherents are predominantly communists, socialists and anarchists who reject turning to the police or the state to halt the advance of white supremacy.”

Both Antifa and the Proud Boys are well known for their embracement of political violence as a tactic.

The piece points out that PayPal also banned Antifa groups from its services, a move which some on the left have criticized for creating what they say is a false equivalency between Antifa and the Proud Boys. The article describes two incidents in which “anti-fascist” groups and the Proud Boys clashed – one in New York City and one in Portland, Oregon.

The writer claims that “members of the Proud Boys have been arrested for the violent attacks, but there’s no evidence of equivalent violence by Antifa organizations.” However, there is evidence of such violence on the part of Antifa in both cases, and there were Antifa members arrested on the night of the New York City incident.

The first incident discussed is a violent brawl between a group of Proud Boys and protesters, some of whom were masked, that occurred in Manhattan after an Oct. 12 speech by McInnes at the Metropolitan Republican Club.

The night before the event, the club had been vandalized with windows broken, anarchist symbols spray painted on the door and a threatening message left saying the “attack is merely the beginning.”

ThinkProgress mentions how the Proud Boys “attacked antifascists who were protesting” McInnes’ appearance. The outlet links to a news report that shows video of a fight that occurred between the Proud Boys and Antifa protesters after anti-fascists appear to throw a bottle at a group of Proud Boys.

Based on what can be seen on camera, one of the Proud Boys throws the first punch and an all-out brawl quickly ensues, with both sides throwing punches and kicks at one another. Two anti-fascists are brought to the ground and pummeled by a group of Proud Boys. Several Proud Boys were arrested and charged with assault and other crimes days later.

Thank you those who’ve submitted info regarding the violent incident which took place on 10-12-18 in the UES. As we further the investigation, we urge additional victims/complainants/witnesses to come forward. If you have info, call CrimeStoppers, 800-577-TIPS

1,339 people are talking about this

ThinkProgress notes these arrests, but fails to mention that three individuals were also arrested for assault and robbery in a separate clash that very night. The New York City Police Department said they could not confirm whether the individuals were affiliated with a particular group, but Rebecca Kavanagh, a senior staff attorney for the Legal Aid Society, suggested they were “anti-racist protestors” in a tweet.

This matches a statement from the NYC Metropolitan Anarchist Coordinating Council about the night of Oct. 12: “By the end of the night, no Proud Boys were arrested, and several anti-fascist protesters were hauled away in handcuffs. Infuriating? Yes. Surprising? No.”

Gavin Wax, a journalist who has written for conservative news outlets, attended the McInnes event and was an eye witness to the incident. He described what he saw in an interview with The Daily Caller News Foundation.

NBC News reported that the assaulted YouTuber, Paul Miller, appeared to be sympathetic to the right-wing group based on his social media history.

Details of this account match NYPD arrest records. The police told TheDCNF that the victim, a 30-year-old male, was approached by eight to 10 individuals who began taunting and striking him before stealing his backpack. Three of the alleged perpetrators were arrested that night and charged with assault and robbery – Caleb Perkins, 35; Kai Russo, 20; and Finbarr Slonim, 20. Perkins was also charged with resisting arrest.

The second incident mentioned by ThinkProgress was a street brawl that occurred the following day in Portland between right-wing groups, including the Proud Boys, and Antifa. Video of the incident captured by Mike Bivins, a freelance journalist who lives in the Portland area, shows the brawl breaking out between the two sides. 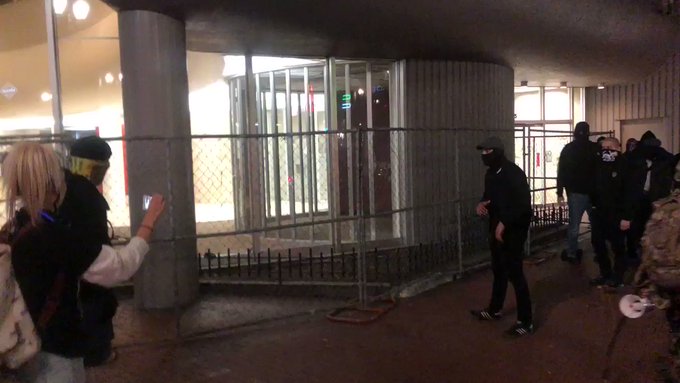 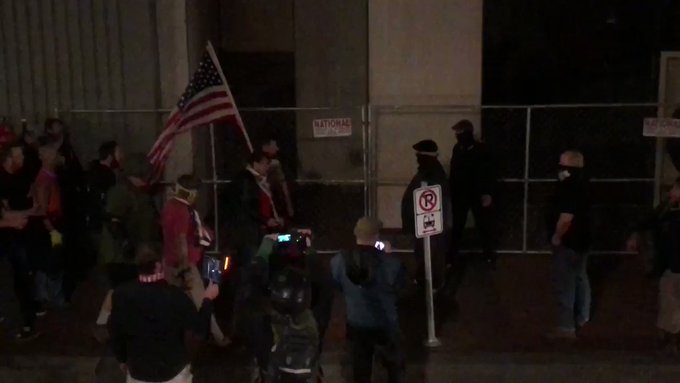 1,336 people are talking about this

When asked about whether he thought there was evidence of equivalent violence that night, Bivins responded to TheDCNF on Twitter, saying, “That’s tough, because it is clear that many people down there were ready for a fight, and the antifascist group did strike first, although most of the evidence – my own video evidence that I tweeted that night – shows the Patriot Prayer and Proud Boys group doing most of the damage.”

Patriot Prayer is a far-right, Oregon-based group similar to the Proud Boys.

Another video he posted on Twitter shows what appear to be Antifa members pepper spraying a group of Proud Boys before the brawl breaks out. “Breaking: first confrontation. Antifa pepper sprayed proud boys,” reads Bivins’ caption of the video. 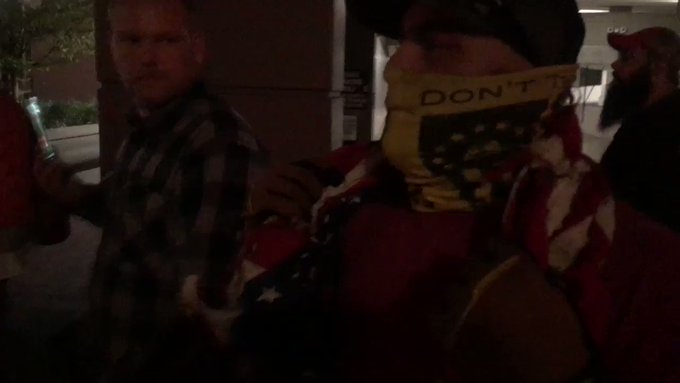 253 people are talking about this

“I have always maintained that these people, all of them, know what they are getting into,” added Bivins, who has covered a number of similar incidents. No one on either side was arrested at the time.

It should be noted that Antifa, and Antifa-affiliated groups, have a history of violent acts outside of these two incidents.

An Antifa demonstrator was charged last year with aggravated assault and a number of other charges after allegedly stabbing a police horse in the neck with a flag pole. The horse only suffered minor injuries.

Paul Welch, a progressive protester, was clubbed in the back of the head by an anti-fascist protester at a demonstration in August after refusing to give up an American flag he had brought.

The University of California- Berkeley was forced to cancel a speech by right-wing provocateur Milo Yiannopoulos after Antifa protesters became violent. “Black-clad protesters wearing masks threw commercial-grade fireworks and rocks at police,” CNN reported in February 2017. “Some even hurled Molotov cocktails that ignited fires. They also smashed windows of the student union center on the Berkeley campus where the Yiannopoulos event was to be held.”

In another incident, Eric Clanton, a former college professor with links to Antifa, was arrested after allegedly attacking people with a metal bike lock at an April 2017 “free speech” rally in Berkeley. Clanton has taken a three year probation deal in connection with the attack, according to the local news site Berkeleyside.

The Department of Homeland Security has officially designated Antifa’s activity as “domestic terrorist violence,” according to documents obtained by Politico.

Likewise, the Proud Boys are known for their propensity for violence. McInnes himself was filmed punching a protestor outside the National Press Club in January 2017. A story from The Los Angeles Times published in July recounts a bar fight between the Proud Boys and activists, including the Democratic Socialist of America’s Los Angeles’ chapter.

The FBI considers the Proud Boys to be an “extremist group with ties to white nationalism,” according to a Washington state sheriff’s office report.

ThinkProgress did not respond to a request for comment.

Is Thanksgiving A Racist Holiday?