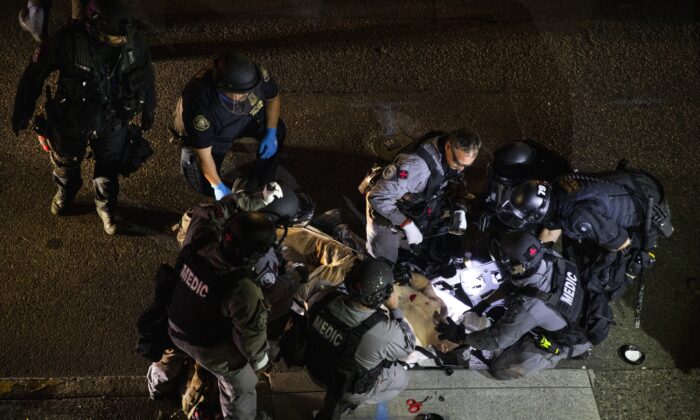 On Saturday, Facebook permanently banned friends of Aaron “Jay” Danielson, the man who was shot to death in Portland. Those banned were affiliated with the Patriot Prayer group, and admins of the Facebook group.

Joey Gibson posted about the ban on his Parler account. 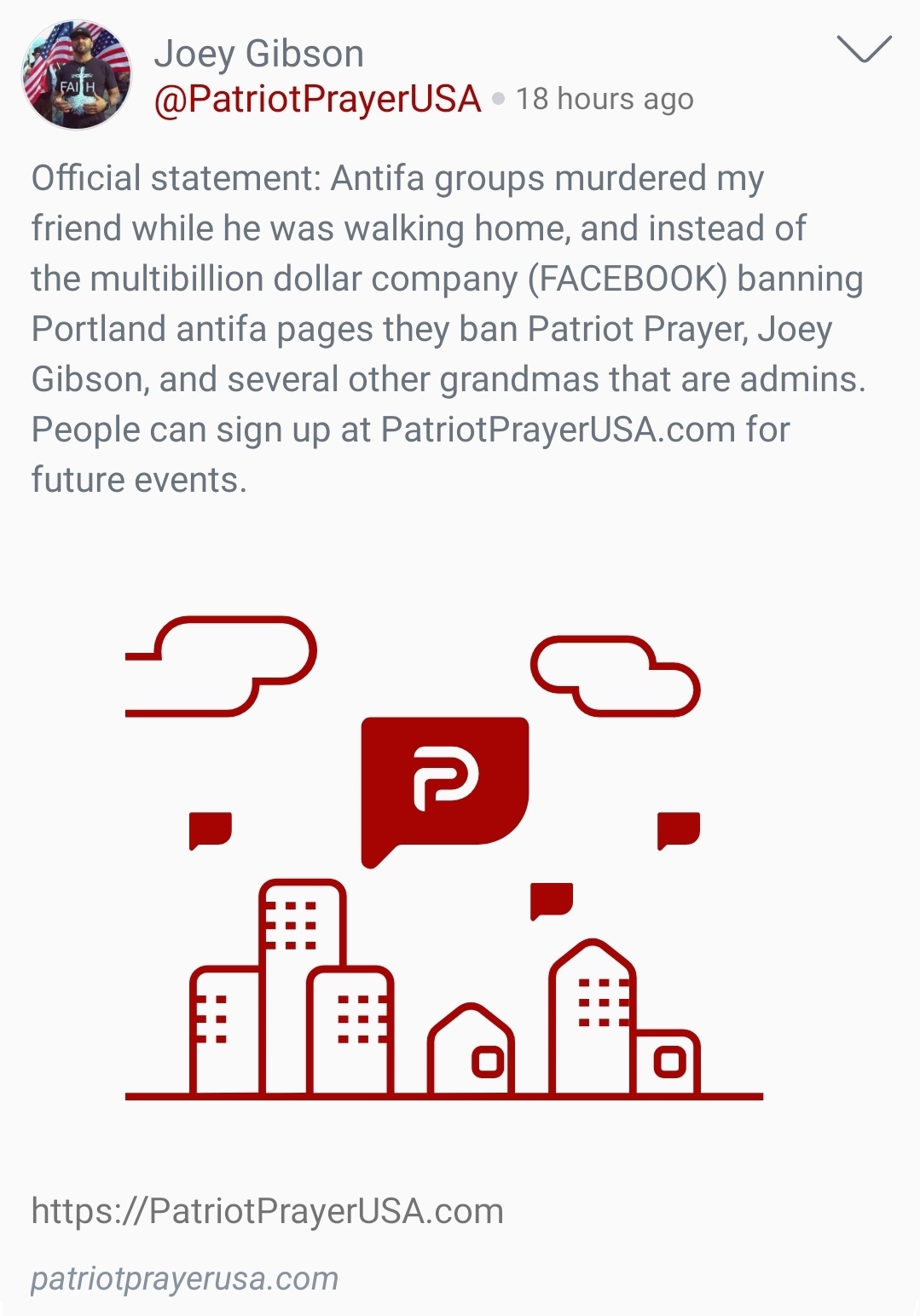 Carmen Estel, one of six admins of the page who also had their personal accounts removed by Facebook, posted to Parler as well. 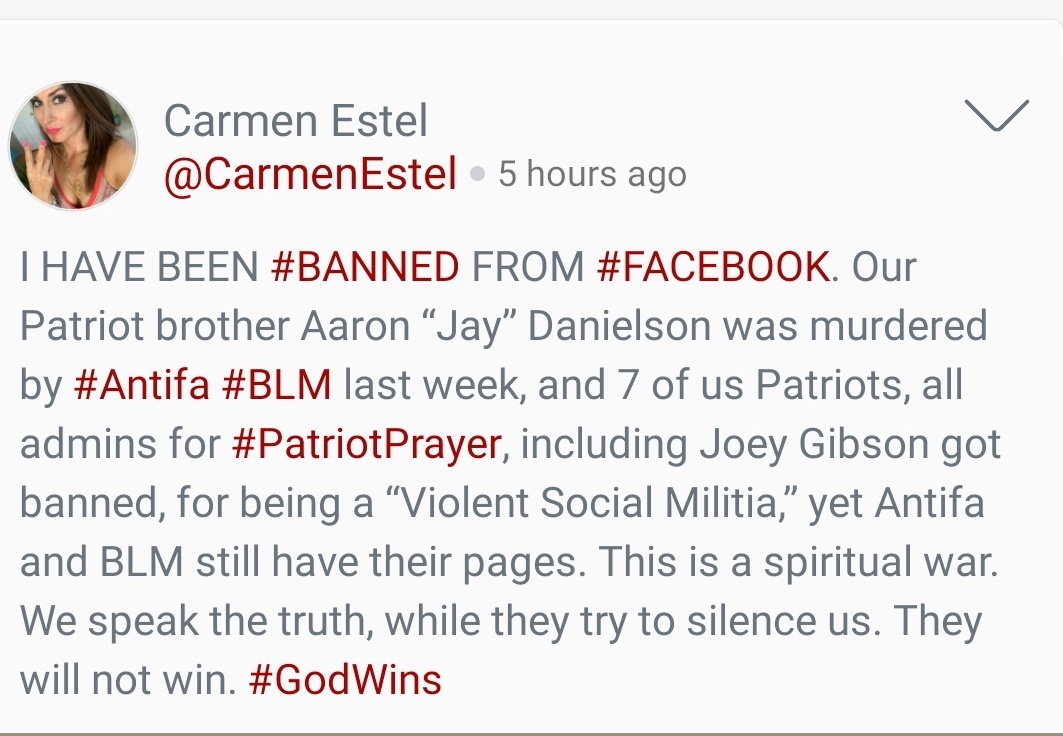 The Libertarian Republic spoke to Carmen Estel about her removal from Facebook.

According to Carmen, there was no communication from Facebook or warnings regarding her account. It was simply removed. 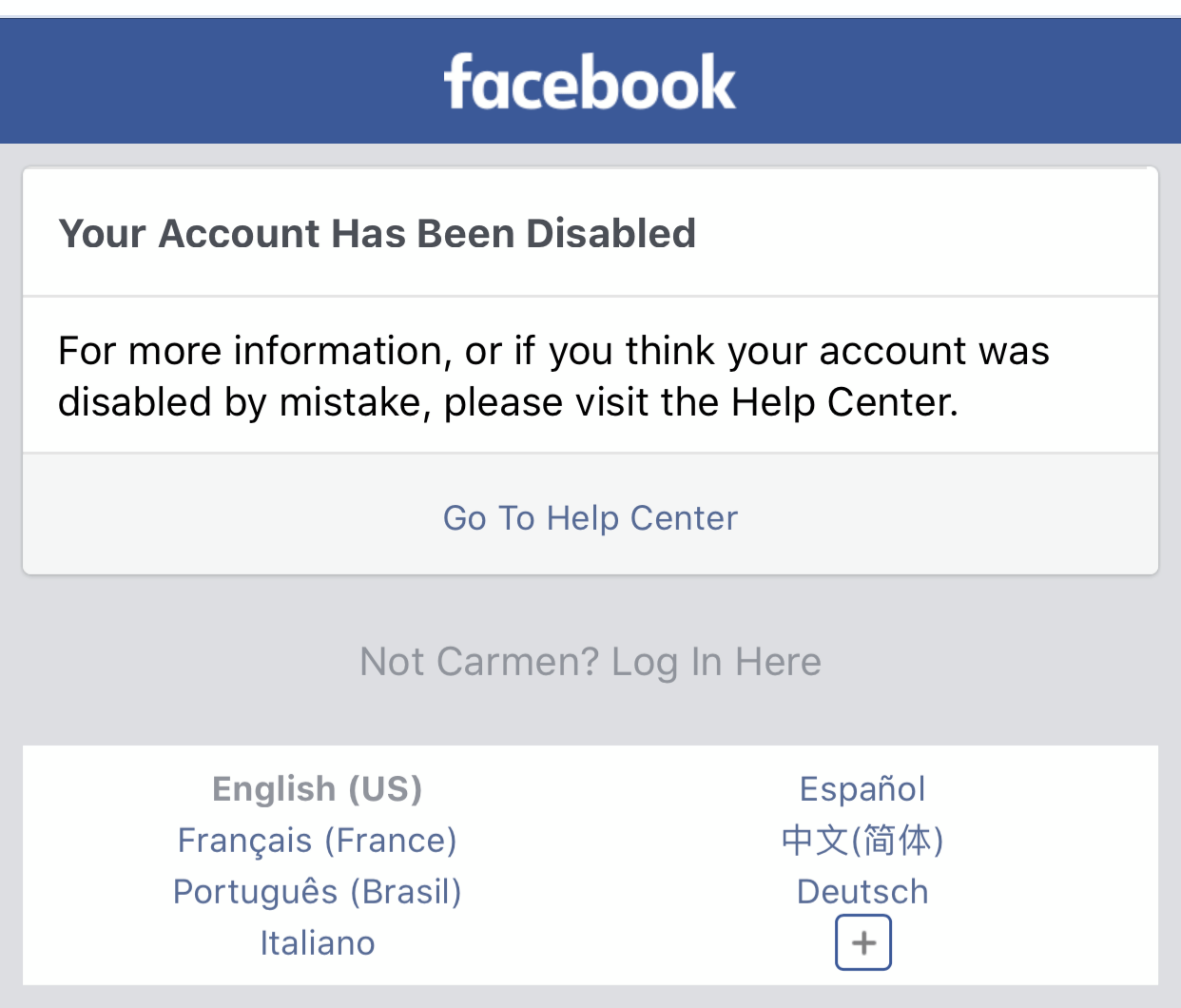 Carmen stated there is no additional information in the Help Center regarding her removal from Facebook.

The reasoning for the removal was later reported on by NBC News.

“Patriot Prayer has hosted dozens of pro-gun, pro-Trump rallies, and attendees have repeatedly clashed with left-wing groups around Portland, Oregon, where one group supporter was killed this week.

Facebook took down the pages as part of efforts to remove “violent social militias” from its social networks, spokesman Andy Stone said.”

Its dangerous organizations policy now includes groups that celebrate violent acts or suggest they will use weapons, even if they are not directly organizing violence.

Gibson, who espouses non-violence but is accused by anti-fascist groups of provoking confrontations, did not immediately respond to a request for comment.

After the shooting he cautioned supporters not to seek revenge, but rather ‘push back politically, spiritually.'”

Carmen stated she is unfamiliar with the term violent social militia. “I’ve never heard this phrase before, and it sounds broad and made up; something that they can paint anyone with,” Carmen told The Libertarian Republic. “It seems now that Facebook is behaving as a publisher rather than as a platform.”

Patriot Prayer has been known for clashing with Left Wing activists in the past; however over a year ago Patriot Prayer seemed to have abandoned their street marches that drew those counter demonstrators.

According to Carmen, that transition occurred following their participation in the movement to Free Hong Kong. Carmen and Joey traveled to Hong Kong to attend those protests on the 4th of July in 2019.

Carmen states that since then, Patriot Prayer has been much more refined, focusing on local issues.

Joey Gibson has since spent much of his time lobbying local governments in Washington State to not observe new gun regulations imposed on the state from Initiative 1639. He has traveled across the state from Battle Ground to Whidbey promoting the idea of 2nd Amendment Sanctuary Cities.

“The group’s founder, Joey Gibson, said it’s one of many he has been holding across Washington state in response to the gun control initiative that passed last November.

During the meeting, Gibson and other speakers will be urging Whidbey residents to push elected officials to sign an ordinance that prohibits public figures and public funds from going toward ‘enforcing unconstitutional laws.’

‘It’s going to be focusing on the Second Amendment,’ Gibson said.”

Since the COVID-19 pandemic began, Carmen states that both she and Joey have been participating in Reopen America events, and supporting business owners who had refused local orders to shutter their stores. Carmen has been participating in these events in California, where she has previously stated that someone called Child Protective Services to report her for attending.

The incident in Portland changed everything, when Aaron “Jay” Danielson was gunned down in the street by Michael Reinoehl.

Reinoehl told Vice News in an interview that he acted in self defense.

Very shortly following that interview, law enforcement shot and killed Reinoehl during an attempt to apprehend him.

However Reinoehl’s claim of self defense did not appear to be accurate as CCTV security footage showed that Reinoehl stalked the victim before firing. Reinoehl hid behind the entrance of a parking garage before approaching them from behind and firing when they turned around.

Below are examples from pages 16-18 of the criminal complaint against Michael Reinoehl, which can be read in full here.

The criminal complaint against antifa shooter Michael Reinoehl has been released. It shows stills from a security camera which catches the last moments of Jay Danielson’s life. It shows Reinoehl turned into a parking garage to ready his gun. https://t.co/5BGp1qFTNk pic.twitter.com/q5bHqJxg0Y 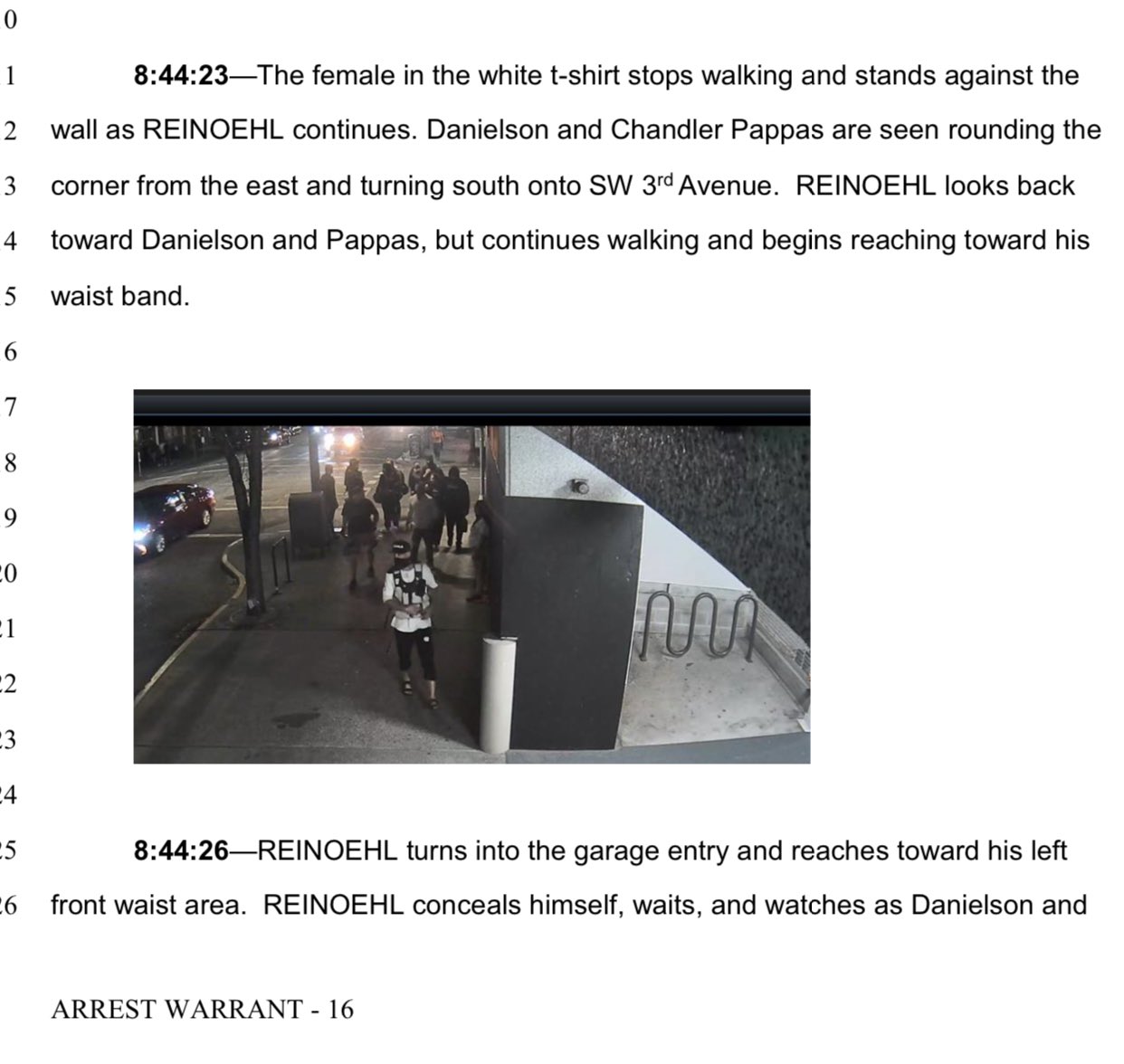 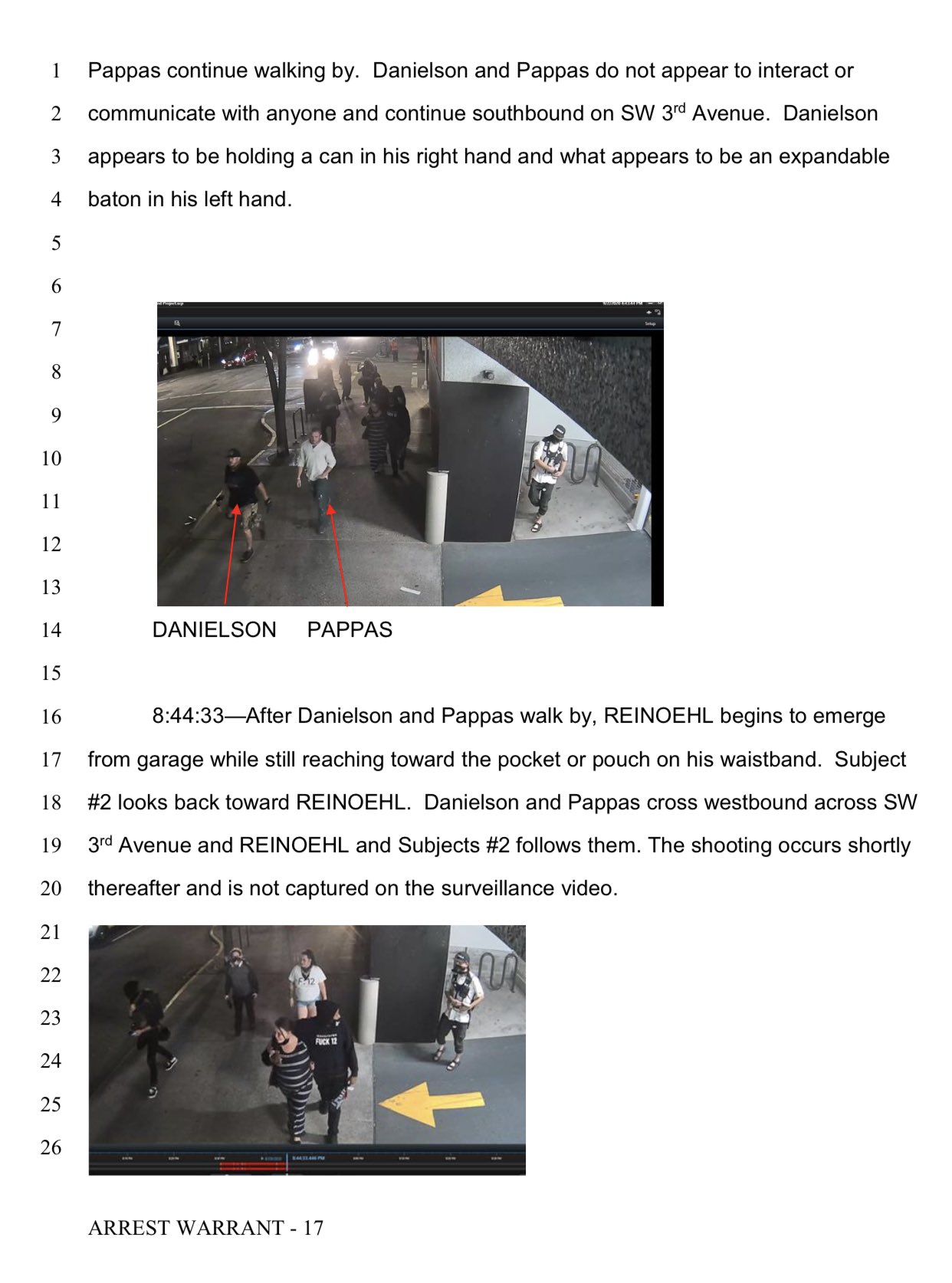 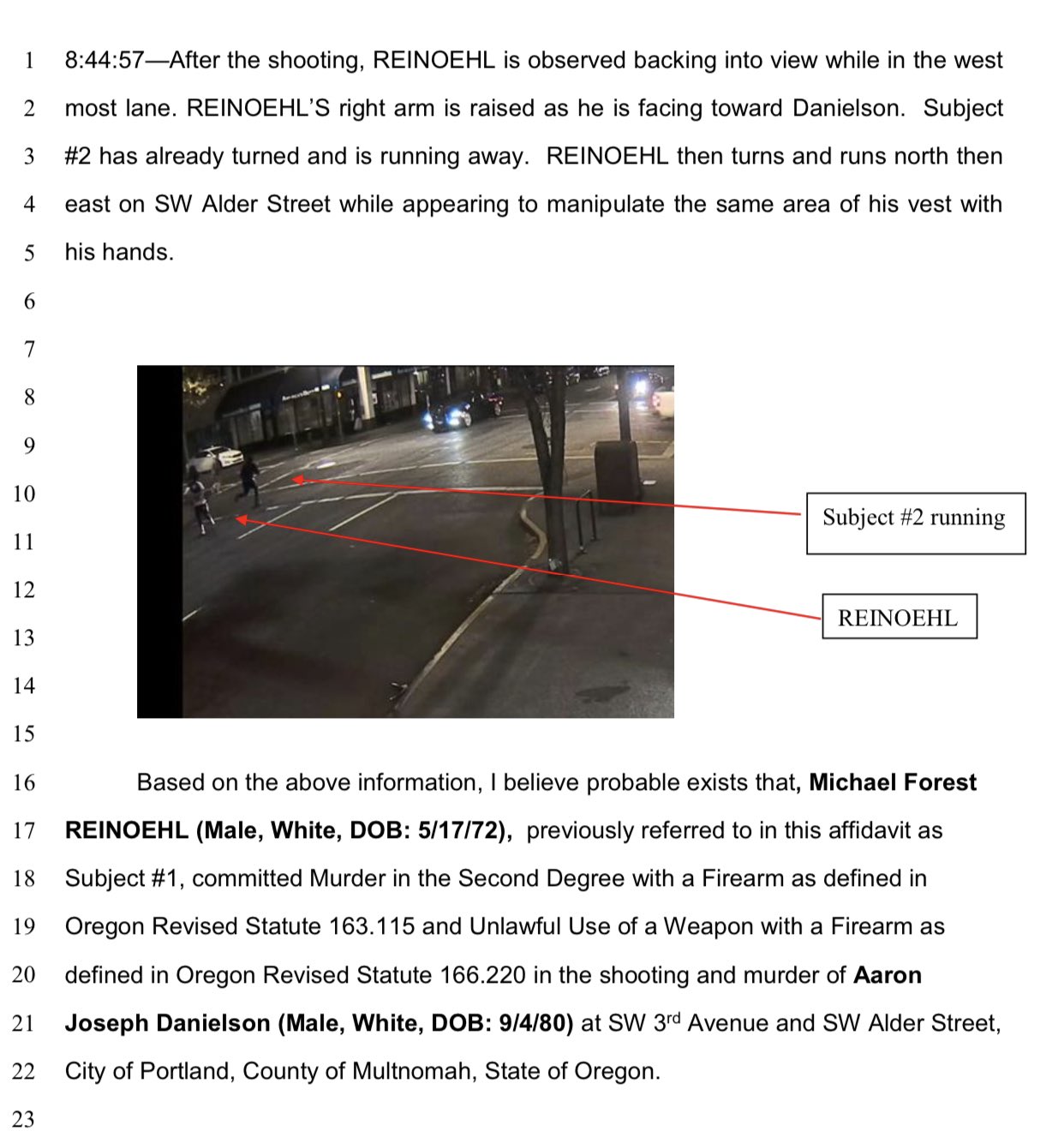 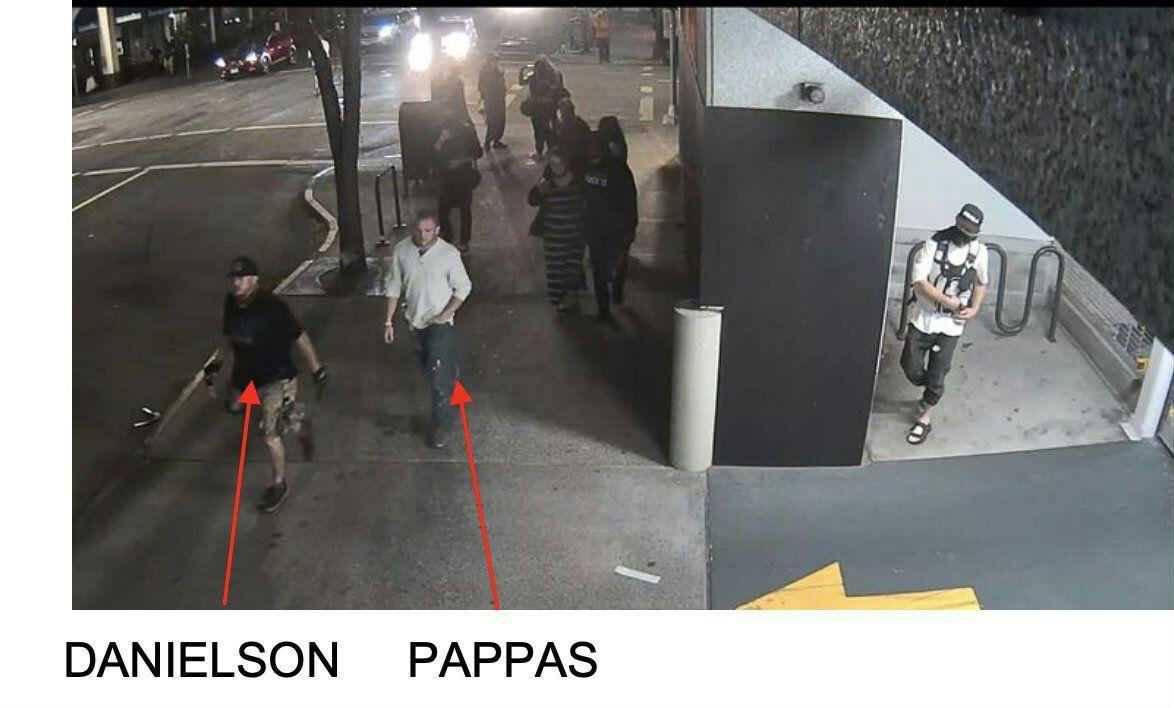 Facebook banned Carmen Estel, along with the other admins and Joey Gibson immediately upon the release of the criminal complaint against Reinoehl.

Carmen states that they were about to get a lot more attention following that report being released, and believes that is why Facebook removed them at that very moment. She believes that Patriot Prayer was about to receive a lot of new interest, and Facebook stopped that from happening on their platform.

“The report was proof that Jay was executed in cold blood. I don’t like using the word executed, because Jay didn’t commit any crime or do anything to deserve it. More like assassinated. That’s the word I use,” Carmen told The Libertarian Republic.

“Jay was a friend of ours. He was just so nice. Always had a smile. He did nothing to deserve it. He was just walking down the street, wearing a Patriot Prayer hat.”

Why is SEO important?