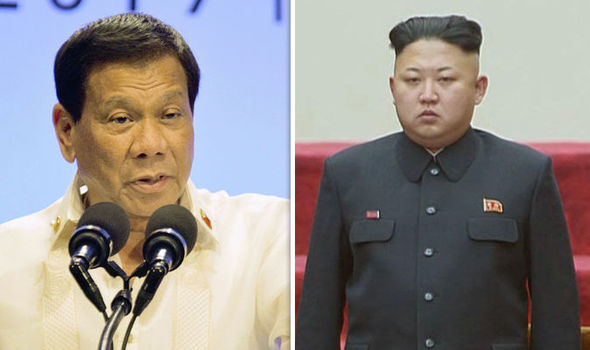 President Donald Trump and President of the Philippines Rodrigo Duterte had an interesting discussion about the growing threat from North Korea in late April.

“What’s your opinion of him, Rodrigo?” Trump asked, referring to North Korean dictator Kim Jong-un, according to transcripts of the phone conversation, which was described as “very friendly.”

“He is not stable,” Duterte said, noting that Kim smiles in a disturbing manner as he tests missiles and rockets. The Philippine president commented that Kim laughs with “dangerous toys in his hands which could create so much agony and suffering for all mankind.”

“He is playing with his bombs, his toys, and from the looks of it, his mind is not working well, and he might just go crazy one moment,” Duterte told Trump. The rhetoric is somewhat shocking considering Duterte’s take-no-prisoners war on drugs that has ended the lives of thousands of Filipinos. The campaign that has come under fire from international organizations, Western democracies, and human rights organizations.

The two presidents, both strongman leaders, discussed bringing China on board to help rein in the North Korean nuclear threat. Duterte informed Trump that he believes “China will play a very important role there.” He told Trump he would call China’s President Xi Jinping and ask for his assistance to prevent a “nuclear blast which is not good for” anybody.

Duterte revealed in early May that he called Xi at Trump’s behest.

According to the transcript, Trump asked Duterte to tell China that everyone is counting on it to resolve the growing crisis, which China’s development of advanced missiles has exacerbated.

China has reduced trade with North Korea, but some observers suspect the country has yet to take meaningful steps to rein in its aggressive neighbor. “We will see what happens,” Trump said.

Duterte emphasized deep concerns about the North Korean threat, explaining, “Every generation has a mad man — in our generation, it is Kim Jong-un.” The Philippine president said that his people are afraid because his country is within striking distance.

“We can handle it,” Trump replied. He added, however, that he hopes China can solve the problem.

The president introduced that the U.S. has strategic military assets in the region to deal with North Korea if necessary, but he would like to avoid the application of force if possible.

“We have a lot of firepower over there,” Trump explained, “We have two submarines — the best in the world — we have two nuclear submarines, not that we want to use them.”

“We can’t let a madman with nuclear weapons let loose like that,” the president stressed, “We have a lot of firepower, more than he has, times 20, but we don’t want to use it.”

The Trump administration is pursuing a policy of “maximum pressure and engagement,” which relies heavily on international pressure and sanctions. At the same time, the administration has repeatedly stated that “all options are on the table,” indicating that a military solution is still a possibility if North Korea goes to far.