The Department of Defense has yet to receive formal guidance from the White House following President Donald Trump’s Wednesday tweets claiming that transgenders will no longer be allowed to serve in the U.S. military, according to Pentagon Chief Spokesman Dana White.

“The Department of Defense is awaiting formal guidance from the White House as a follow-up to the Commander-in-Chief’s announcement on military service by transgender personnel,” White said Thursday. “We will provide detailed guidance to the Department in the near future for how this policy change will be implemented. The Department will continue to focus on our mission of defending our nation and on-going operations against our foes, while ensuring all service members are treated with respect.”

After consultation with my Generals and military experts, please be advised that the United States Government will not accept or allow……

….Transgender individuals to serve in any capacity in the U.S. Military. Our military must be focused on decisive and overwhelming…..

….victory and cannot be burdened with the tremendous medical costs and disruption that transgender in the military would entail. Thank you

Chairman of the Joint Chiefs of Staff Gen. Joseph Dunford clarified to all service chiefs that there will be “no modifications to current policy” until Trump’s order has been received by the Defense Department and official guidance has been developed. 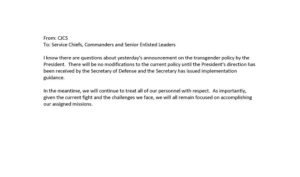 Pentagon Spokesman Navy Capt. Jeff Davis declared Thursday to a Washington Examiner reporter that “we don’t execute policy based on a tweet.” U.S. Army Chief of Staff Gen. Mark Milley similarly told a National Press Club audience “to date I have yet to receive implementation guidance, or directives, from Secretary of Defense” on the president’s transgender troop ban.

Prior to Trump’s announcement, reports indicated that service branches were having difficulty crafting integration policies for future transgender service members. The service’s objections appeared to stem from logistical rather than ideological concerns. The logistical concerns include a lack of funding for upgraded group showers and changes to service members’ living quarters.