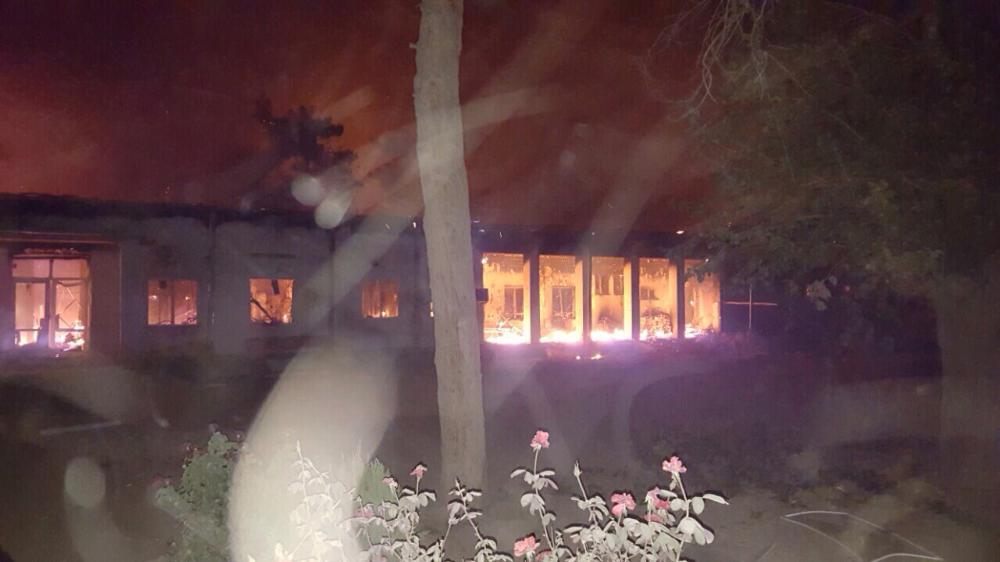 Doctors without Borders confirm that their hospital in Kunduz, Afghanistan, did not display any internationally recognized markings showing it was a hospital when a U.S. gunship attacked the facility on Oct. 3, killing 22 and injuring hundreds, according to the group’s interim report released Thursday.

The report may also open the group to accusations that it violated international law by forcibly removing civilian patients in favor of wounded Taliban soldiers.

Doctors without Borders, which is globally known as Medicins Sans Frontiers or MSF, is an international organization of medical personnel that provides health services in long-lost parts of the world, including in war zones. It has charged that the Oct. 3 U.S. air strike on their Kunduz trauma center constituted a war crime.

On Nov. 5 the group released its “initial MFS internal review” that divulged new details about their activities while operating in Taliban occupied territory and about circumstances surrounding the attack.

The group’s admission that they agreed to a Taliban demand that civilian patients be removed from their beds for wounded Taliban soldiers could mean MSF and the Taliban violated Article 16 of the Geneva Convention which states: “The wounded and sick, as well as the infirm, and expectant mothers, shall be the object of particular protection and respect.”

The trauma center, which housed 140 beds, was located in Kunduz, a northern Afghanistan provincial capital that fell to Taliban forces on Sept. 28 after encircling the city in a siege that lasted for months.

Afghan government forces retreated to the outskirts of the city Sept. 28. The provincial capital’s loss was a national embarrassment and humiliation for the central government in Kabul.

The group also disclosed for the first time that on Oct. 1 an unnamed U.S. government official in Washington, D.C., contacted MSF to inquire about the safety of the hospital staff and asked if any Taliban were “holed up” in the facility. MSF does not disclose its reply to the U.S. official.

A letter introducing the report by Dr. Joanne Liu, the MSF international president, concedes that the organization did not have any exterior photos to confirm any flags were on the roof during the attack.

Even if the MSF flags were erected, they are not recognized by the Geneva Accords as official hospital emblems. The Red Cross, the Red Crescent and the Red Lion have been universally recognized as visible markings that a building is a “protected” facility as a hospital.

However, as previously reported by the DCNF, Article 38 of the Geneva Convention requires hospitals to display “distinctive emblems indicating medical units” and that they must be “clearly visible to the enemy land, air or naval forces, in order to obviate the possibility of any hostile action.”

The convention stipulates that “the Red Cross, the Red Crescent or the Red Lion and Sun on a white ground … are recognized by the terms of the present convention.”

The organization was fully aware of the dangers in the area. On Sept. 28 hospital personnel drew up a “mass casualty plan.”

Diplomats in the the French and Australian embassies also warned MSF on Oct. 2 there was a risk the doctors could be the victims of a mass kidnapping by the Taliban. Emergency numbers were exchanged between local MSF staff and the embassies if the kidnapping occurred.

The Kunduz hospital staff included local Afghans as well as French nationals and an Australian. The other nationalities of the international team were Cuban, Malaysian, Hungarian, South African, and a Filipino. No Americans worked in the hospital.

MSF steadfastly insists they emailed the hospital’s GPS coordinates on Sept. 29 to unnamed officials at the U.S. Department of Defense, the Afghan Ministry of Interior and Defense and the U.S. Army in Kabul.

Dr. Liu and the report itself does not identify the rank or names of the U.S. or Afghan officials who were contacted by email.

MSF reports that after the fall of the city, “At 6pm, two Taliban combatants arrived at the hospital gates to inform MSF that they were in control of the area.”

It affirms that the Taliban told MSF to vacate civilians from hospital beds for its soldiers, saying that on Sept. 29 hospital officials “met with a Taliban representative to discuss the need to free beds for other critical patients due to the ongoing fighting, and therefore for some patients to be discharged.”

The group acknowledged that soon after the takeover, Taliban wounded began to flow into the hospital. “Prior to September 28 the vast majority of the wounded combatants were observed to be government forces and police. In the week starting 28 September, this shifted to primarily wounded Taliban combatants,” they report.

“Starting this same day a large number of patients (were) discharged from the hospital, including some against medical advice. It is unclear whether some of these patients discharged themselves due to the discussion to free some beds between MSF and the Taliban representative or whether there were general concerns about security as rumors were circulating of a government counter-offensive to reclaim Kunduz city,” according to the MSF report.

The air attack on the hospital came at 2 a.m. the morning of Oct. 3 as a U.S. Air Force AC-130 aircraft approached the building, allegedly at the request of Afghan forces.

The aircraft made a number of passes at the building and attacked it with heavy weapons,” MSF reported. “It caused fires and destroyed the main hospital building and damaged satellite buildings.

The Pentagon is currently investigating the attack. U.S. officials have given at least four different versions of the assault.

“MSF claims that there are rules even in war. That’s correct. But they’re obligated to follow them as much as the U.S. and other militaries are,” Col. James Williamson said in an interview with the DCNF. He said they should have had “clear and visible markings” on the hospital.

Williamson is a 30-year Special Forces veteran who is the cofounder of a group called Special Operations OPSEC, a non-profit organization of retired military and intelligence officers.

Williamson served in Kosovo, Iraq and Afghanistan. Part of his tour of duty in Afghanistan was in Kandahar Province.

He told the DCNF in an interview that the Taliban were often brutal and took over hospitals because they knew of its “protected” status. “I was in Kandahar; the Taliban took over a hospital,” he said. “So they lose their protected status.”

Williamson also worked in a humanitarian capacity with Kurds in northern Iraq and was in touch with many relief organizations throughout the world. He said MSF was openly hostile to the United States.

“MSF was by far the most disagreeable, openly hostile organization to both the military and particularly with the United States,” he told the DCNF.

“Even when we were trying to give them medicines, which the military had, they refused to take it because it came from the military and specifically from the U.S. military. I question their true motives,” he said.