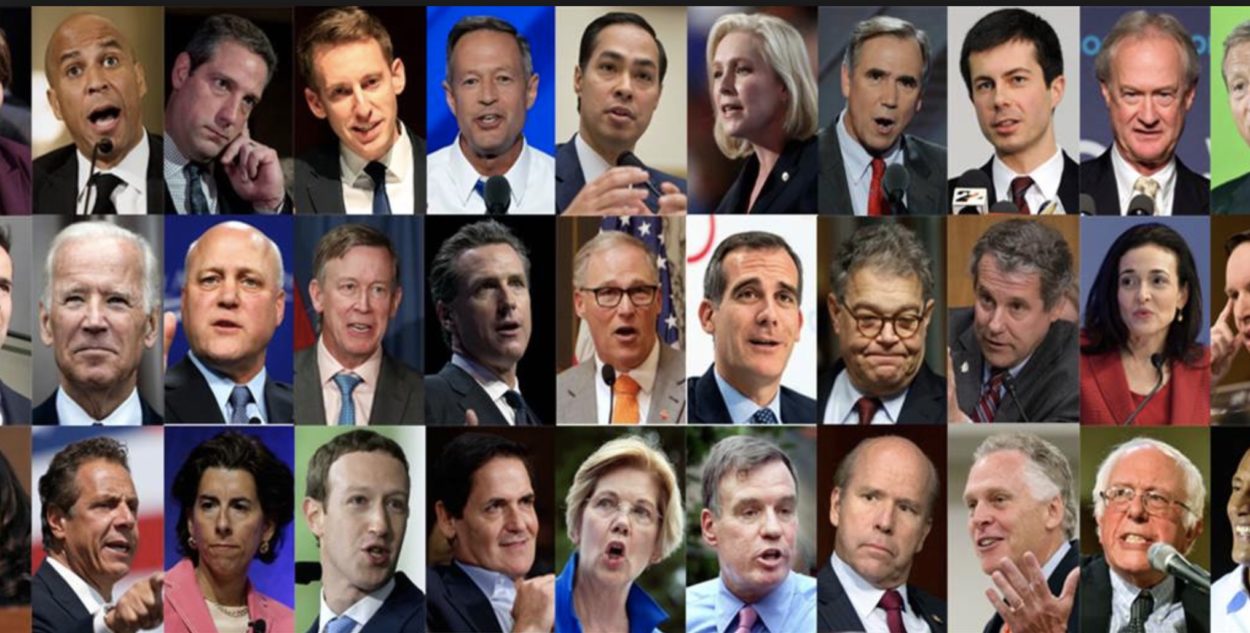 Remember 2016? It wasn’t so long ago as the media cycle makes it seem. Remember all the candidates in the Republican party? 17 candidates.

2020 is coming soon and, according to CNN, there are already 17 Democrat candidates,not counting Joe Biden or Howard Schultz (currently running as an Independent candidate, having left the Democrat party).

The top five candidates are former Vice President Joe Biden, Independent Senator and 2016 candidate Bernie Sanders, former US Representative in Texas Beto O’Rourke, US Senator from California Kamala Harris, and US Senator from Massachusetts Elizabeth Warren. Although there are lots of candidates, there are mainly three types of Democrat voters. Those groups of voters are the moderate “Blue-dog” democrats, the progressives, and the intersectionals. One of these groups does not seem like the others: the moderates.

Sanders, Beto, Harris, and Warren all fit within the progressive sector of the Democrat party, although maybe Harris doesn’t really count because she doesn’t identify as one – but still hasn’t pissed them off.

In the intersectionality group, they have Kamala Harris, who perfectly fits in, and then the other top five candidates (except Joe Biden) try to fit in by talking about racial injustice, changing their name to sound more hispanic , or identifying as part Native American .

In the Progressive Bracket, Bernie is obviously at the the top because he’s the most famous “democratic” socialist running in 2020. Then, there’s Beto in a distant second for identifying as a capitalist, even though his policies are similar to Bernie’s. In third place, comes the former champion of progressivism, Elizabeth Warren (she lost first place during 2016 after endorsing Hillary Clinton). In last place, is Kamala Harris because the media talks about her mainly as the Attorney General of California to give her the false image of being “hard on crime” – which satisfies Republicans who take the media’s word for granted.

In the Intersectional ranking, Harris is first because she is a member of two “oppressed” groups. She’s a woman and an African-American. Beto comes in second for changing his name to sound more Hispanic. Then comes Warren, who lost a lot of support by accidentally proving that she’s barely part Native American. In last place is Bernie Sanders because he didn’t call President Donald Trump a racist until he decided to run in 2020.

These are the biggest questions because the fact is that, in order to win against President Donald Trump, they need to swing their party back to recapture some of the states they lost in 2016, such as Pennsylvania, Ohio, Michigan, Wisconsin, and Florida. And they can only do that by reaching out to the moderates.

The Democrats’ best hope was the CEO of Starbucks, Howard Schultz – but he’s planning to run as an independent. He will act as a spoiler vote for the Democrats, as reported in CNN. In 2020, the Democrats’ biggest obstacle will be meeting all of their voters demands and satisfying all groups, especially the moderates.

If the Democrats are not able to satisfy all of their groups, like the situation in 2016 ( 1/10 Bernie supporters voted for Trump, 1/10 voted for another candidate that isn’t Hillary Clinton or Donald Trump, and 1/20 didn’t vote), then it is very likely that the Democrats will fail in 2020.

Beto: AR-15’s Are “Weapons of War”, But You Should Be Allowed to Keep Them