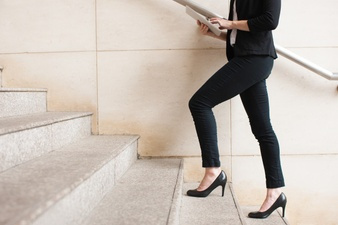 Politico recently ran a story lauding the fact that women are now captains of the war industry. How women took over the military industrial complex details how the five biggest defense contractors, as well as top arms negotiators in the U.S. government, are all women. With Gina Haspel heading up the CIA, it looks like the future is female, at least as the far as the war machine goes.

I’m not so certain that this is what the Old Guard Feminists of my youth had in mind, but at least now when a defense contractor pitches a new program to kill people more efficiently, and some government negotiator drools with expectation, at least it won’t be a bunch of old white guys. Progress? Maybe.

Yet women CEOs for Fortune 500 companies are still less than 5% of those who make it to the top spot. Many will rightly point to a myriad of reasons for this. Women are more likely to choose career tracks that accommodate family, or choose jobs that are service oriented, or eschew hard science and tech careers in favor of humanities. These are all true, and these reasons also tend to infuriate feminists because their only answer to any disparity between male and female outcomes is the patriarchy.

You may say that the patriarchy doesn’t exist, but it does, sort of. Anything that might pass for the patriarchy in the Western world is not a structural system of policies and laws like it once was. Rather, it is more akin to Adam Smith’s Invisible Hand. If people, in aggregate, make private choices that unintentionally pave the way for more male CEOs than female CEOs, the influence of men in business will simply outweigh the influence of women. Likewise, women have far more influence in education – not because of any official policy, but because more women choose that field. Women in business adapt to policies that reflect masculinity, and men in teaching adapt to policies that are influenced by ideas associated with feminine characteristics. Despite gargantuan efforts at large companies to promote diversity and undo these trends, the invisible hand of patriarchy persists.

But what are the feminists doing? Are the personal choices of feminists feeding the patriarchy they so despise? I’m afraid so.

A study published in Evolution and Human Behavior found that women in American, Chinese and European populations found that women are 1,000 times more likely than men to find the opposite sex more attractive based on higher salaries. Now, I would have guessed it would be a factor based on anecdotal evidence, but 1,000 times? Surely, the study had to include financially independent women, educated women, and a good share of feminists. How could independent, educated, financially secure women still be considering a man’s earning potential when it comes to choosing mates? They certainly don’t need to.

Yet they do. In his book, Coming Apart: The State of White America, 1960-2010, Charles Murray details the destruction of the white middle class over four decades. He documents that during this time frame, the white middle class splintered into two groups: one with high incomes and stable families, and another which is poorer, less educated and less married. Once, the middle class occupied common real estate and shared hallmarks of children raised in two-parent families. Over time, the wealthier denizens of the middle class ascended into McMansion neighborhoods where au pairs stride down the sidewalks pushing UPPAbaby strollers, while those of below average means saw cultural erosion—a rise in single motherhood, crime and drug use. Murray posits that educated people, who are more financially successful in a knowledge-based economy, have come to rather exclusively pair bond with people of similar educational and economic backgrounds. Yet that is not entirely true. Men are still more likely to marry someone whose earning potential is less than his own. Even as women have gained ground educationally and professionally, which should give them a much greater choice of potential marriage partners, women are less likely to “marry down.”

Bloomberg did a study of who marries whom in 2016. Here’s what they discovered:

High-earning women (doctors, lawyers) tend to pair up with their economic equals, while middle and lower-tier women often marry up. In other words, female CEOs tend to marry other CEOs; male CEOs are OK marrying their secretaries.

You’d almost have to conclude that women are financial bigots, unable to find much use for men who don’t make as much money as they do. And this bigotry is feeding the very social conditions that leftists often decry: the destruction of the middle class, income inequality and, yes, the perpetuation of the patriarchy.

Think about it, feminists. If you’re a high earner, and you will only pair bond with a man who makes more money than you, you are consolidating two premium incomes into one household. I know how much you want to be that power couple. I know it takes two incomes to put a Mercedes or two in the driveway. And why should some woman who works at Brooks Brothers be able to capture a man who makes $500k a year?

Next time the words, “income inequality,” dribble off your lips, ask yourself if you’re willing to combine your six-figure salary with that of a perfectly charming, upright, and attractive man who is earning just under $60,000 per year? Is the answer no? Don’t blame capitalism. Don’t blame the patriarchy. Blame yourself.

If you’re thinking, “I may want to take time off to raise kids and I need a man for that—” Just stop right there. I fail to see the difference between that and a woman who went to college for her MRS degree. You have forgotten the feminist axiom, “A woman without a man is like a fish without a bicycle.” What kind of feminist are you?

And if you marry up, isn’t your husband’s career always going to be more important than yours? You’re never going to have a job selling fighter jets to the U.S. Military if you don’t have a husband who is willing to move around for your career. Just ask Marillyn Hewson, the CEO of Lockheed Martin.  Or ask Heidi Cruz. She could have been running Goldman Sachs by now, but her husband just had to try to become president.

If you want your career to flourish, marry someone who is willing to be the great man behind every great woman.

Middle income guys have qualities that you may be unaware of. They usually can fix things because growing up they had to know how. They can change a faucet or the starter on your Mercedes. They’re not high maintenance and will accept a Bud Light as easily as a craft beer. Some of them will even stay home and raise kids while you go out and conquer the world. Imagine coming home to a home-cooked meal, a clean house, and tales of hilarious Dad Hacks. This life could be yours.

By rejecting the idea that you must marry up, you show that you are more than a biological unit obeying outdated evolutionary instincts. You reduce income inequality, bolster the middle class, and diminish the remnants of the patriarchy with your personal choices. Not all heroes wear capes.

So remember that guy who owned the book store? The one who found you a first edition of The Feminine Mystique (which you never actually read)? You thought he was kind of hot, and really pretty sweet, until you realized that 2002 Honda Civic was his. Well maybe it’s time to shop for another book. It wouldn’t hurt to give him a chance.