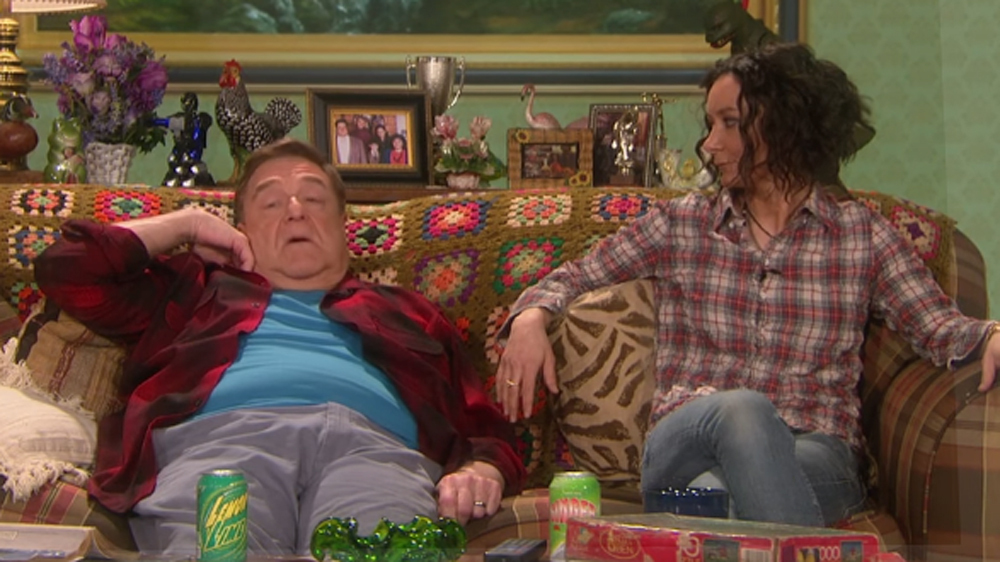 “Excuse the mess, but we live here.” – Roseanne Barr

The cancellation of ABC’s “Last Man Standing” delivered a shockwave in many circles, primarily because it was a popular show with good ratings and a well-intentioned messaged regarding politics and family values – leading many to believe the show was cancelled for its conservative protagonist and Tim Allen’s openness about his own political views.

Around the same time the news of the cancellation broke, the news of a shocking resurrection hit the wire; “Roseanne” was coming back on the very same network, ABC.

For the uninformed, “Roseanne” was a bar-setting sitcom about a blue-collar, working class family in fictional Lanford, Illinois. They weren’t quite ‘white-trash’, but it’s possible the garbage man got confused once or twice.

The legacy of “Roseanne” is that it was timeless and timely. Speaking to universal truths of family life, from bickering to bills to an ever-changing social climate. Roseanne herself was anything but a ‘typical’ sitcom mom, but I think most everyone knew a mom like her, in real life. Just like we knew a “Becky” and a “Dan.” We knew and liked and laughed with the Connors because they were like us – or at least reminded us of someone we knew.

Now, think about these people – suburban, blue collar, layed off from now-closed factories or motorcycle shops or owning small businesses, and tell me what you think their politics will be in 2017.

I’ll give you a hint. Roseanne was a #NeverHillary-er.

I’ll give you another hint – in 2009 Roseanne Barr postulated where the characters in the show would be in modern times; Roseanne and Jackie would own a Marijuana dispensary. Mark would have died in Iraq. Darlene would be a lesbian, Becky at Wal-Mart, and Arnie was said to be going in politics.

Ladies, gentlemen, libertarians, and understandably butt-hurt “Last Man Standing” fans, there is hope yet. And, believe it or not, it might just sit better with ‘liberal’ Hollywood, too. If Becky is a lesbian, Mark a deceased veteran, and you get a minority character or two in there – the show has all the bases “Last Man Standing” left open to criticism, covered. Strong female protagonist – and show runner, LGBTQ characters, and minorities.

You get that house in order and this show can really explore what middle-America is really like. What a depressed factory town would be like in 2017. What the people would be like (probably Trump voters).

When Hillary Clinton and President Barack Obama both said we need to reach across the aisle and go to the people who voted for Trump to try to understand them, the populace didn’t heed that advice, instead opting to ‘resist’ and protest and demonize.

If the new Roseanne does it right, they’ll come to liberals via the magic of telecommunication. And maybe, just maybe, we’ll achieve a bit of…understanding regarding one another via the power of the contemporary situation comedy.

Of course, this is all just postulation from a man with a Television Writing and Producing Degree who has seen every episode of Roseanne at least three times (save for the terrible final season). It’s possible the show avoids politics entirely, or the Connors have a giant #Resist banner hanging in their iconic living room.

But I doubt it. In my mind the new Roseanne will do what the old Roseanne did best; be political without appearing to be. Roseanne had a lesbian kiss, an openly gay couple, and tackled issues of domestic abuse, parental neglect, breast reduction surgery, PMS, and many other ‘issues’ in a way that funny first, human second, and political a distant third – and most importantly, from distinct points of view.

Imagine the arguments a ‘Liberal’ Becky and ‘Conservative’ Roseanne could have over a family dinner. Imagine just how true-to-life that will be for some viewers. Imagine its catharsis.

My favorite Roseanne moment is the final moments of the show’s finale. It was the high point of a terrible season of television that will be ret-conned. But in the final monologue, Rosanne outlined a worldview I put in my high school year book.

We could all use a bit of that right about now. 2018’s mid-season can’t come soon enough.

Bonus: Wanna know who did the theme song for Roseanne’s final season?

STUDY: Women May Avoid Leadership Positions Out Of Unhappiness