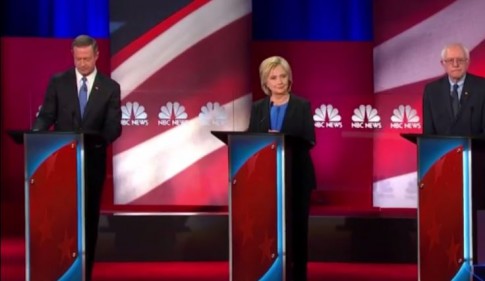 Presidential Candidate Hillary Clinton was burned by her opponents at the Democratic debate held Sunday evening regarding her Wall Street ties.

The grilling began when Sanders was asked about how his plan for regulating Wall Street differed from Clinton’s.

As reported by Breitbart:

“I have doubts when people receive huge amounts of money from Wall Street,” Sen. Bernie Sanders (I-VT) said of his rival Clinton.

“The leader of Goldman Sachs is a billionaire,” who advocates that Congress cuts Social Security, Sanders said, adding “Secretary Clinton…you’ve received over $600,000 in speaking fees from Goldman Sachs in one year” even though the firm paid fines for illegal behavior.

“Not one of their executives is prosecuted while kids who smoke marijuana get a jail sentence,” he said.

Deflecting, Clinton tied herself to the Obama administration’s successes and questioned Sanders’s position on Obama’s policies, leading to a back and forth about the candidate’s relationships with the President.

Not to miss the opportunity, former Governor Martin O’Malley joined the conversation, adding, “What Secretary Clinton just said is actually not true.”

“Secretary Clinton I have a tremendous amount of respect for you but for you to say there’s no daylight between the three of us on this is just not true… you bring up president Obama in a debate here in South Carolina in order to defend your coziness with Wall Street.”

This was the final Democratic debate before the Iowa Caucus on February 1.