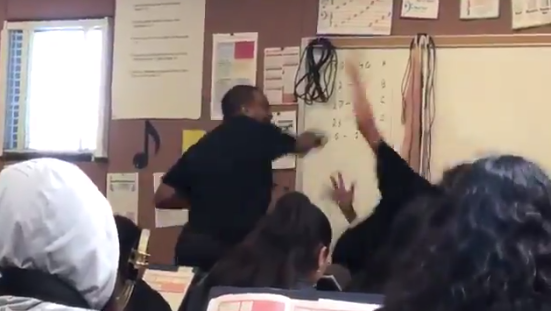 A California high school music teacher was arrested Friday after he was caught on film fist-fighting with a student in class.

Marston Riley, 40, was caught on video throwing punches at a Maywood Academy High School student as a female wearing a yellow vest tried to break up the fight.

He was taken into custody on suspicions of child abuse and causing physical harm to the student after the incident was reported to officials around 1:30 p.m., KTLA 5 reported on Friday.

The student was treated and released from a local hospital. He did not sustain serious injuries, according to NBC 4.

Witnesses in the class said the brawl started when the teacher allegedly informed the student that he had to leave the class for wearing the incorrect uniform. The student allegedly refused to go, KTLA 5 reported.

Video from KTLA 5 showed the student throw a basketball at Riley prior to punching the boy in the face.

“Crisis counselors and additional School Police patrols will be at the school on Monday to support our students and staff,” a Los Angeles Unified School District spokesperson told The Daily Caller News Foundation in a statement.

Students and parents are divided over the altercation.

One student said the situation was set-up, according to KTLA 5.

“Everything was planned out,” the unidentified student said, KTLA 5 reported. “There were students there who were already taking out their phones to record the incident.”

A mother believed Riley was defending himself against the student while another person claimed the teacher was known to be aggressive, according to ABC 11.

“I think it was both of their faults, like the teacher and the student,” student Enrique Deharo said, ABC 11 reported. “I was scared for the kid, and partly for the teacher, too.”

Maywood Academy High School did not immediately respond to TheDCNF’s request for comment.

Why Medical Students Are Suddenly Struggling to Conduct Surgeries