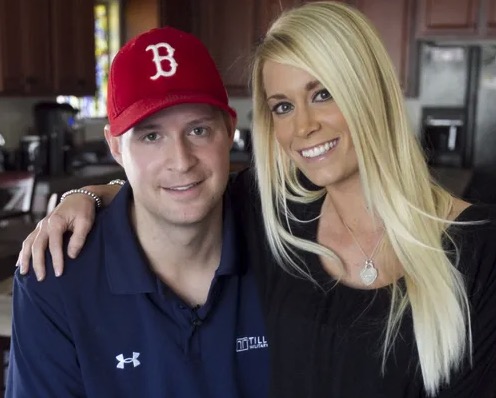 Triple amputee Air Force veteran Brian Kolfage is refusing to answer basic questions about his new nonprofit organization that will use the funds raised by his viral $20 million GoFundMe to build a wall along the U.S.-Mexico border.
Kolfage announced WeBuildTheWall Inc. on Friday, but documents submitted to Florida reveal the nonprofit was created over two weeks ago in late December.
Kolfage is directing check donations to a separate organization, We Fund The Wall Inc. with a PO Box in Houston; The Daily Caller News Foundation has been unable to find any record of its existence.
Charity Watch President Daniel Borochoff says Kolfage’s new nonprofit raises a “huge red flag.”

The founder of the viral $20 million border wall GoFundMe campaign is refusing to answer basic questions about his new nonprofit organization that will use donor funds to construct a piecemeal wall mile-by-mile along the U.S.-Mexico border.

Triple amputee Air Force veteran Brian Kolfage is asking donors to transfer their donations to WeBuildTheWall Inc. following his announcement Friday that the federal government will not accept any funds from his viral fundraising campaign, despite his initial claim otherwise.

GoFundMe said Friday that donors will need to opt into transferring their donations to Kolfage’s new Florida-based nonprofit by April 10, when all remaining contributions will be automatically refunded.

Kolfage claims the bylaws of WeBuildTheWall Inc. prevent him from taking any salary from donor funds that originate from GoFundMe. But Kolfage has refused to provide The Daily Caller News Foundation a copy of the nonprofit’s bylaws to corroborate his claim.

I thought it was pretty clear. I made a promise that I would NEVER take a penny 100% of fundraising through @gofundme donations will only go towards the wall, 100% means 100% right? Board won't see any of that money! Donations will be accountable by an audit committee as well.

Kolfage’s statement omits the fact that he is now directing check donations to an entirely different organization, We Fund the Wall, Inc. with a PO Box in Houston.

Kolfage has ignored multiple inquiries from TheDCNF asking why he’s directing check donations to a separate organization based in a different state, and whether donations sent to We Fund the Wall, Inc. can be used to compensate him in any way shape or form.

It’s unclear how much money Kolfage has raised via check donations, but his tweets suggest it could be a substantial amount.

Furthermore, TheDCNF has been unable to find any record of We Fund the Wall, Inc.’s formal existence, and multiple inquiries requesting the organization’s founding documents have gone ignored.

“People should give right to the organization that they want to support. Why are they directing money to some other entity?” Borochoff said. “This money could get stolen or misdirected to be used for another purpose.”

“There could be some kind of misdirection of funds or something going on there that people might not be happy about,” Borochoff added. “They really need a good reason for doing that.”

Kolfage has also refused to address why he waited until Friday inform his donors about the existence of his new nonprofit organization, which was founded over two weeks ago on Dec. 28, according to Florida’s Division of Corporations. 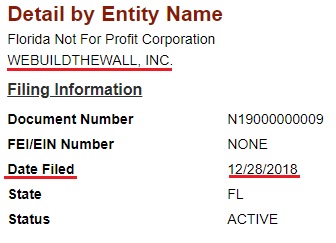 The stated purpose for Kolfage’s nonprofit is: “funding, construction, administering, and maintaining a United States Southern Border Wall and the processes associated therewith,” according to its founding documents signed on Dec. 27.

This appears to show that Kolfage was aware the federal government would not be able to accept donations by Dec. 27 at the latest, but despite this, he knowingly raised $2.8 million on GoFundMe between that date and Friday, all the while telling donors that 100 percent of their donations would be handed over to the government for the purpose of funding a border wall.

Kolfage has ignored multiple inquiries asking why he waited over two weeks to inform his donors of his intention to transfer their contributions to his new nonprofit.

We are building the wall mile by mile for half the cost of what the government pays!

It’s happening! This has been planned for weeks!

IF you want your donation to count to our new mission you need to opt in here: https://t.co/sWaTOtc324@DeplorableChoir @RyanAFournier

“We have contacted the Trump Administration to secure a point of contact where all the funds will go upon completion. When we get this information secured we will update,” Kolfage claimed at the onset of his fundraiser.

Kolfage now says “highly experienced team is highly confident that we can complete significant elements of the wall in less time, and for less money, than the federal government.”

All contributions collected by Kolfage’s GoFundMe after Friday will be automatically routed to WeBuildTheWall Inc., and Kolfage claimed Sunday that one third of his 340,000 donors had already opted into the nonprofit.