The U.S. Customs and Border Patrol is already known for using questionable tactics to carry out its duties. Yet a new report has shown a disturbing trend. Agents have been purposefully stepping in front of vehicles, or claiming that moving vehicles were an imminent threat, in order to come up with an excuse to open fire.

While attempts have been made by Border Patrol to cover up the shootings, law enforcement agents have skewered them in a 21-page report for their “lack of diligence”.

“It is suspected that in many vehicle shooting cases, the subject driver was attempting to flee from the agents who intentionally put themselves into the exit path of the vehicle, thereby exposing themselves to additional risk and creating justification for the use of deadly force,” the report reads. In some cases, “passengers were struck by agents’ gunfire.”

Agents deliberately stood in the road in front of moving vehicles, while drivers who posed no direct threat to agents or others were mercilessly fired upon. 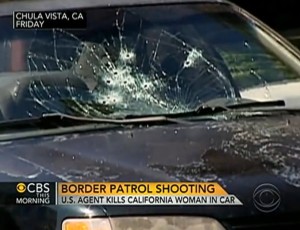 This practice is not only dangerous to the drivers, but it endangers bystanders and agents themselves. The report stated, “It should be recognized that a half-ounce (200-grain) bullet is unlikely to stop a 4,000-pound moving vehicle, and if the driver … is disabled by a bullet, the vehicle will become a totally unguided threat.”

The Border Patrol’s failure to punish offending agents was also reprimanded in the report, as was their practice of keeping the offenders anonymous. The ability to break rules with impunity is emboldening these agents to shoot whenever they desire.

“There needs to be a level of accountability if you want to change the culture and the pattern,” said Christopher Wilson, an expert on U.S.-Mexico relations at the Woodrow Wilson Center, a think tank in Washington. “People are being killed that don’t need to be killed.”

One of these victims was the recent shooting of a mother of five from California. Valeria Alvarado, 32, was in her car when a federal agent unloaded his clip through her windshield, killing her. Officials claimed that the unnamed agent was “hit” by the car and “carried several hundred yards.” While witnesses tell conflicting stories, one witness directly contradicts the official version of events. 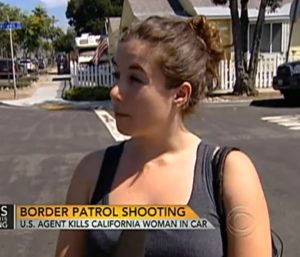 “From my apartment I could see a car stop in the middle of the street, and a guy coming and walk in front of the car and shooting about 12 times. It was a horrible thing to see,” a witness named Ashley Guilebeau told CBS-8 News.

“He just went up, shot her, in plain clothes with no identification, no badge, nothing.” Watson suspects Alvarado was fearing for her life when she put her car in reverse, away from the officer in plainclothes that was screaming at her with a gun. “Without her even able to say a word — I didn’t hear anything — he just came across and shot, many times.”

Guilebeau’s story has been ignored. The agent involved is still anonymous, and his lies about the event have been deemed the official story.

The independent report recommended that Border Patrol revamp its practices, and instruct agents to step out of the way of moving vehicles, and would like to ban the whole practice of shooting cars unless the driver is shooting at them. Border Patrol unsurprisingly said they wouldn’t be changing their policy, because drug smugglers would purposely try to run over agents if they knew that agents were not supposed to shoot at cars.

There is also disturbing information in the report that agents were firing upon Mexican children who were allegedly throwing rocks. One boy was shot 8 times, including twice in the head and five times in the back, yet his killer was not punished, and his parents say he was just walking home from school.