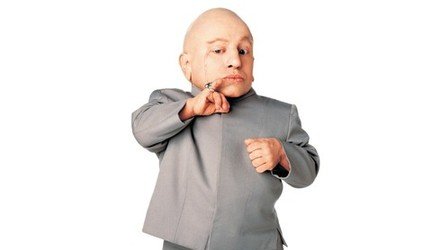 One of the phrases in the SJW lexicon I detest most is “toxic masculinity.” I detest it simply because, despite the thin pretense sometimes thrown up by it’s users, it is simply an ironclad reason for someone to never listen to anything that isn’t pleasing to their delicate ears. So why have so many of those who are so eager to decry the ridiculous behavior of progressive ‘snowflakes’ so eagerly flocked to the near cousin of so called ‘toxic masculinity?’

It’s a condition that most might identify as a ‘Napoleon complex’ or ‘small man syndrome’. This is however a misnomer in our current case since the small man syndrome being flocked to by the loudest and least reflective members of the alt-right, and to some extent conservatism in general, has little or nothing to do with physical stature. No this is small male syndrome of the mind.

Let us set our scene in fair Verona for an archetype:

Abraham: Do you bite your thumb at us, sir?

Sampson: I do bite my thumb, sir.

Gregory: Do you quarrel, sir?

Gregory: (to Sampson) Say ‘better’; here comes one of my master’s kinsmen.

Sampson: Draw, if you be men! Gregory, remember thy swashing blow.

We’re all familiar with the recent misadventures of Greg Gianforte who felt it would be capital thing to execute a modified belly to belly suplex on a reporter recently. Recently in my home of Alaska we had an incident where state senator slapped a reporter over what he perceived as an unfair article, find more on that gem here. And on a much greater scale our current Caligula has made a career of childish posturing and buffoonery that might be called the step below the direct physical confrontations listed above.

Unfortunately however these males, as I will now call them, are only half of the problem (Note: I will call them males and not ‘men’ because while I can’t dispute their chromosomal makeup I CAN deny them the dignity of the former title). The remainder of the issue are the members of the baying mob. The legion of online comment leavers, talk show callers, and general dunces who play the role of the sitcom laugh track to these juvenile antics.

I’ll stick close to home for a moment and discuss some of the reactions to a reporter being slapped in Juneau. As those who clicked the link above will know the reporter in question was slapped upon approaching state Senator David Wilson and asking him about the contents of a story he had written concerning the Senator. In response he was slapped.  Those are the facts. To my mind no irreparable harm was done, the Senator could simply have sought out the reporter later and apologized for badly over reacting in the heat of the moment. Which, incidentally, is what a real ‘man’ (as distinct from a mere male) would have done.

But our small men of the mind tread a different path. The Senator issued one of those meaningless non-apology apologies that political machines everywhere specialize in. And then, with time, the ongoing three ring train crash that is the Alaska legislature produced another story that swam up and devoured the incident.

What I found more appalling than a politician refusing to the honorable thing (which…I mean…and water is wet) was the reaction of some ordinary Alaskans. The common theme was to question the reporter’s ‘manliness’ or ‘masculinity’ for not striking the Senator in return. Lots of chortling about what a little bitch he was or how the Senator should have hit him harder. In short I was spending most of my life living in a keyboard gangsters paradise. (btw…Reference win of forever right there)

How exactly was this scenario supposed to have played out in the minds of these small males of the mind? Was the reporter supposed to roll with the slap and transition back into a right cross? Was it sufficient provocation for him to seek satisfaction? Perhaps responding with an open handed slap of his own and later sending his second to arrange matters? Pistols at fifteen paces on the steps of the capitol! Three passes with drawn saber in the rotunda!

Comments mirroring the sentiments expressed here in the colonies following our incident swarm like Zubats in Mt. Moon around politicians and ‘males’ like Senator Wilson, Greg Gianforte, and of course our dear Caligula. Swarms of not-men-males puffing out their chests and swaggering through the internet each looking to outdo the others as they thump it down on the table. A horde of Tyblats with nary a Benvolio in sight.

At it’s core the reason this matters is simple: it determines whether this generation of boys grows up to become men or just male. If our small males of the mind have their way those of us with mixed chromosomes will clomp through life with our thumbs perpetually between our teeth. Forever on the lookout for ANY provocation, no matter how slight, that we might lunge for sword or pistol or maybe just hit Stone Cold Stunner. Isn’t living in a perpetual state of near offendedness (yes I realize that’s not a word) the very thing many of these people deride progressive ‘snowflakes’ for?

What this sort of attitude betrays is not strength but it’s own kind of very petty weakness and insecurity. We all know how the narrative would have read in the minds of our small men had either of the reporters fought back:

The hysterics about ‘patriots’ being (literally) assaulted by the ‘liberal media’ would have been shrill and repeated. There would have been no meaty slaps on the back for the reporters for ‘being men’. In addition to the vices of pettiness and insecurity small males of the mind are nothing if not hypocritical.

The scenarios in Alaska and Montana were not ‘self defense’ issues. In a situation where one’s life is threatened the correct course of action is quickly and efficiently apply the necessary amount of force to remove the threat to yourself and others. This was not the case here, as neither reporter’s life was clearly threatened. There was no call for either to escalate the situation, doing so would indeed have made the situation worse. Put another way, and I must be completely clear on this point, of the four people involved in these incidents 50% of them acted like real men. Not the politicians.

And so, respectfully, I might suggest some changes to the small males of the mind. Instead of glorifying hot headed indiscipline why not exalt the cool use of intellect? Rather than endorsing the hair trigger use of physical violence how about temperance and restraint? Or to put in vocabulary more calculated to their head space: ACT YOUR DAMN AGE. The kind of behavior being celebrated by the small males would get a grade schooler rightly punished but somehow it’s a good thing in adults? And adults furthermore we have chosen to be our elected voices?

Of course how each family raises it’s boys is a matter for themselves alone, but that does not preclude some basic reflection. I cannot think the country or the world at large will benefit from a surplus of Conan and a dearth of Atticus Finch. Teach boys how to stand up straight, look people in the eye, shake hands firmly, and to protect themselves and others in need. Leave petty brawling and pubescent testiness where it belongs, childhood. Let’s make sure we breed men and not just males. Actually, let’s aim higher, let’s try to raise a generation of gentlemen.

The opinions expressed here are those of Brendon Berger, obviously, since he took the time to write them down and put his name on them

Around the Republic Podcast: Meet SooperMexican