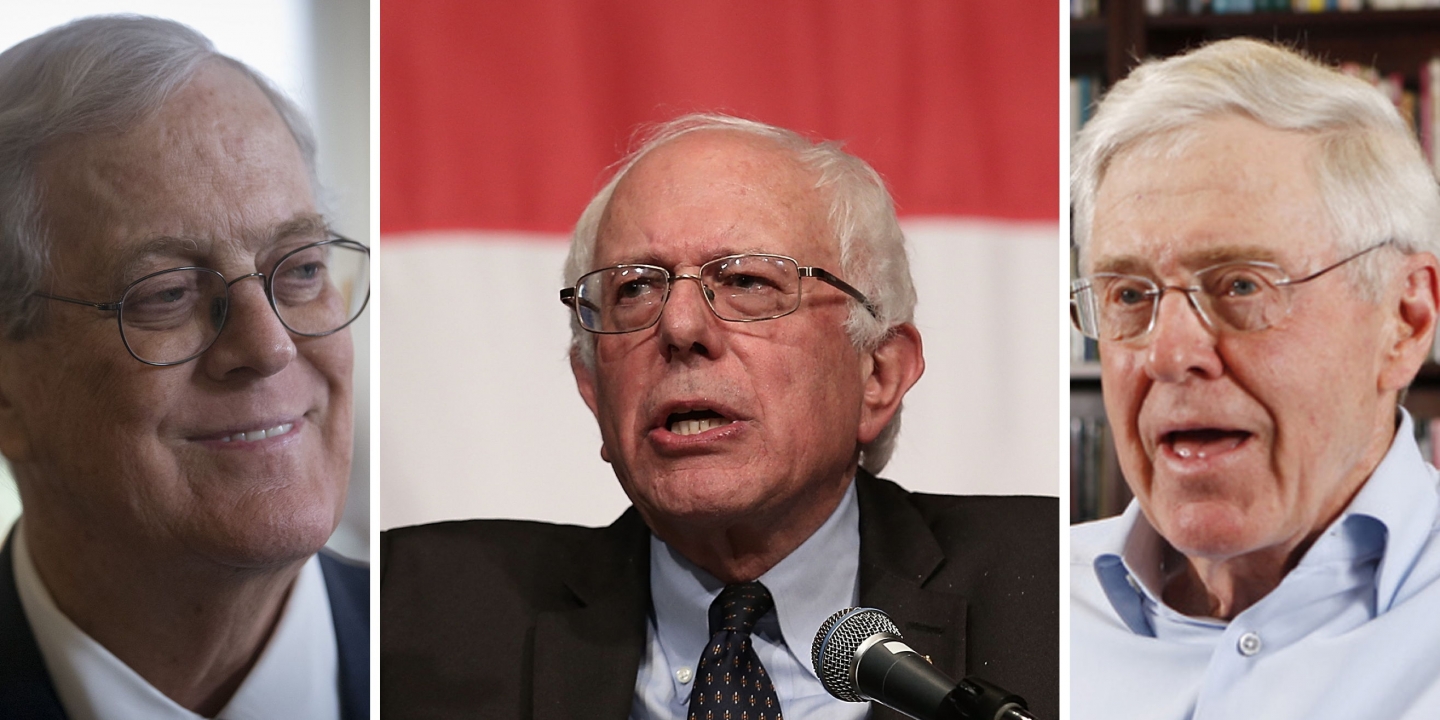 Bernie Sanders is a master of language. He’s able to word things in such a way as to make his ideas appear reasonable, practical, and appealing to his supporters. Effectively, he’s used left-wing populism to build up a large grassroots support movement, a movement that’s made him a household name and given many people the feeling that someone in Washington cares about them.

How did he do it? Keep reading to find out, because this article will examine the persuasion techniques he demonstrated in one of his appearances on Thom Hartmann’s show.

For starters, Sanders is commonly thought of as a “man of the people”. Some reasons for this include his modest upbringing, lower class accent, ability to apparent sincerity, age (which makes some see him as a grandfatherly figure), and decades-long support of New Deal-type programs. All this has caused many people to develop a soft spot for him and see him as a trustworthy figure when it comes to the subjects he talks about in the video.

At the start of the video, Sanders says he believes a “pivotal moment” is upon us. By using such language, he frames the next few years as a time of enormous importance for everyone, which is an immediate attention-grabber. Ronald Reagan brought about the same effect by talking about a “rendezvous with destiny” in his 1964 speech endorsing Barry Goldwater for president. While Reagan wanted to stop the advance of socialism, Sanders is concerned about stopping the conversion of the US from a democracy run by the common people into an oligarchy run by wealthy people. Does he go into why democracy is good, mention anything about the fact that the US was designed as a Republic rather than a democracy, or show any understanding of how wealthy businessmen have been manipulating the government to get their way for over a century? No, no, and no. But that’s not important to his viewers. They’re more concerned about demonizing “the 1%” and making them out to be the cause of most if not all of the problems we now face, which Sanders is more than happy to do.

He further hammers home his thoughts about class differences in the US by talking about the Koch Brothers, who are some of the go-to punching bags for people like Sanders when they want to stir up resentment among lower class people. There’s a common misconception that wealth is a fixed pie, and that therefore for one person to have a lot of wealth requires somebody else to have less (the narrative often goes that wealthy people stole their wealth from poor and middle class people). Sanders and his supporters don’t seem to realize that wealth can grow, so that even if someone’s percentage of the pie remains the same, they will benefit from that individual slice getting bigger (for example 70% of $1,000,000 is much more money than 70% of $50,000 even though the percentage is the same in both cases). Because of this, it’s easy for him to paint the wealthy Koch Brothers as thieves preying upon the less fortunate.

Sanders then mentions how the Koch Brothers have been involved with both the Libertarian Party and the Republican Party. Both parties are commonly seen as enemies of those in need, so just mentioning their names is sufficient to make those with such a view start grinding their teeth. To really get their blood boiling, he reads through some ideas the Koch Brothers support, focusing mostly on those that involve removing government welfare programs, privatizing Social Security, and eliminating minimum wage laws. Those ideas come with statements from the Koch Brothers about how devastating these types of polices have been to the very people they’re intended to help, and though Sanders reads them verbatim, he doesn’t pause for even a second to consider if the policies he supports have hurt people more than they’ve helped them. Doing so would give listeners time to ponder that for themselves, so to prevent that, he moves right along.

Next, Sanders frames the current federal minimum wage of $7.25/hour as a “starvation wage”. That’s a powerful statement with a lot of implications to it. He uses that statement frequently, although he doesn’t back it up with any evidence or discuss how many people earn that wage compared to the number of people who earn more. That doesn’t present much of a problem for him though, as the phrase “starvation wage” paints a mental picture of working people who nonetheless can’t afford to put food on the table. Like everything else Sanders does, it’s an emotional appeal that need not be reasonable or realistic to be effective; as long as it tugs on the heartstrings of his listeners, he’ll have them right where he wants them.

Sanders runs through a short list of government welfare programs that the Koch Brothers oppose, saying “gone” after each one in a somber fashion. This is simply another emotional appeal against their ideas. Once again, he doesn’t stop to consider if these programs have been good or bad for people. He mentions the programs and the people they’re designed to help, and assumes from there that because the intentions of those who created the programs were supposedly good, the results must be good as well.

Bringing it back to “the 1%” and still ignoring how some businessmen have long been lobbying for government power to tilt the playing field in their favor, Sanders plays the “maybe somebody will help them” card. This plays into the belief many people have that in the absence of government programs, nobody would help poor people. Sanders appears to have no knowledge of how private charity, churches, community-based aid, and mutual aid organizations helped people with their healthcare, retirement, car repairs, etc. before the welfare state came and pushed them out of the picture. After all, if the government appears to be taking care of people, why would anybody else need to do it? Again, he leaves no room for listeners to begin thinking about how poor people got by before the state stepped in; they couldn’t all have starved to death, so there must have been something in place to help them.

Throughout the video, Sanders speaks in a serious, somber voice. This is one of his two main styles of communication: the “pulpit voice” and the “library voice”. When giving speeches to thousands of people, he uses a very lively, passionate, and inspiring style that involves almost yelling into the microphone. But when he wants to make an especially serious point, such as in an interview or press conference, he lowers both the volume and pitch of his voice and uses a more thoughtful, conversational style. Think of the first style as a parent raising their voice to get their kids gathered around a fire to read them a story and the second style as them actually reading the story.

To wrap it up, Sanders takes another stab at “the 1%”, categorizes the Koch Brothers as being part of an “extreme right-wing movement” (with the built-in assumption that anything “extreme” or “right-wing” is automatically a bad thing), and once again praises democracy without explaining or examining what it is or why it’s a good thing. Everything Sanders does in this video, and in his campaign up to the point that he started supporting Clinton, is based on persuasion, feeling over fact, and making sure his style is so slick that none of his supporters notices his lack of substance.

Although Sanders holds the opposite viewpoint of the average libertarian on almost every issue, we can still learn a lot from him. Since people with his views and tactics have been so successful over the course of the twentieth century in affecting government policies, why not take advantage of everything they do as long as it’s effective and moral? If we can become more persuasive in our messaging, that would help us tremendously in advancing liberty and reclaiming what’s rightfully ours.

The American Health Care Act is Dead; What That Means for GOP Libertarians