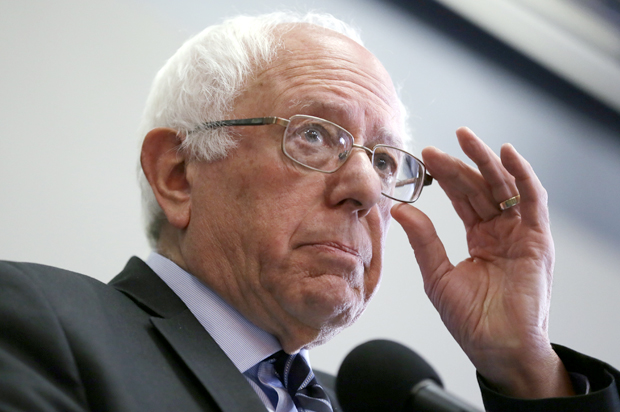 Sen. Bernie Sanders recently announced that “his campaign is working on a plan to require large businesses to regularly contribute a portion of their stocks to a fund controlled by employees, which would pay out a regular dividend to the workers.”

Such a plan would go further than the bills he introduced on May 28 to encourage employee-owned businesses, which would “provide more than $45 million in funding to states to establish and expand employee ownership centers” and “create a U.S. Employee Ownership Bank to provide $500 million in low-interest rate loans and other financial assistance to help workers purchase businesses through an employee stock ownership plan or a worker-owned cooperative.” It would also go further than Hillary Clinton’s 2015 proposal, which aimed to boost profit-sharing through tax credits.

Many on the left have championed the idea of requiring employee ownership, while explicitly noting its Marxist roots. Writing for the New York Magazine’s Intelligencer, Eric Levitz favorably describes the Sanders plan as “worker ownership of the means of production.” At Jacobin, Michael McCarthy describes it as “a bold and exciting plan, one that fits together with a host of policy ideas we can broadly term ‘investment fund socialism.’” Indeed, Dylan Matthews at Vox says it is “Sanders’s most socialist idea yet.”

Let me be clear: I am not opposed to employee-owned businesses or profit-sharing arrangements. In some cases, those structures make sense. But requiring employee ownership or profit-sharing strikes me as a terrible way to address inequality — one that would leave many workers worse off.

The Sanders plan is still in the works, so I cannot address the particular aspects of the proposal. Instead, I will express my concern by considering a simple policy where firms are required to pay their employees partially in company stock.

The traditional Marxist view maintains that workers are exploited because they do not own the means of production and hence do not receive a share of the firm’s profits. To rectify the situation, Marxists have historically proposed collective ownership of the means of production, employee-owned businesses, or equity payments. All three policies aim to ensure that workers share in the firm’s profits.

In a market economy, firms and their employees reach an employment agreement where the firm provides a total payment, the components of which might take many forms (e.g., wages, 401(k) contributions, medical insurance premiums, etc.), in exchange for the employee’s services. For simplicity, let us assume that the firm and employee initially agree to a set of payments comprised exclusively of wages. (I will consider alternatives below.) What happens, then, if the government requires the firm to pay the employee partially in the form of company stock?

No one will deny that the company stock is an asset. But one should note that the stream of wages is an asset as well. And these assets are highly correlated. If the firm does well, the stock price will rise and the employee’s wage prospects will be good. She is likely to keep her job and might even be able to negotiate a raise. If the firm does poorly, the stock price will fall and the employee’s wage prospects will be bad. She might receive her wages with a delay, might be required to take a pay cut, or might lose her job entirely.

Hence, employees who hold their own company’s stock are over-exposed to their company. When times are good, their portfolio of assets (i.e., stock and wages) performs very well. When times are bad, their portfolio performs very poorly. It is an unnecessarily risky portfolio. If possible, such an employee would likely gain from diversifying their portfolio — that is, exchanging the company stock for some other asset that is not so highly correlated with their wages. Indeed, most financial advisers discourage clients from holding much of their own company’s stock for this very reason. To state the matter simply, one should not put all their eggs in one basket.

The benefits of diversification suggest a superior policy to requiring firms to pay their employees partially in company stock. Instead, the government might require firms to pay their employees partially in an exchange-traded fund (ETF) that tracks a broad basket of assets, like the S&P 500 or the Russell 3000. Such a policy would make the employees capital owners, as the Marxists want, without encouraging them to hold such an undiversified portfolio. But the logic of choosing an appropriate portfolio means we can do better still.

Employees come from many walks of life. Some are young. Others are old. Some have working spouses. Others have non-working spouses. Still others have no spouses at all. Differing circumstances often result in differences in the optimal portfolio allocation. The young, for example, might wish to hold higher-risk, higher-return assets than their older colleagues because they have more time to weather temporary market losses.

One-Size Does Not Fit All

If firms are required to take a one-size-fits-all approach, like paying employees partially with a total-market ETF, many employees will have to sell a portion of the ETF to acquire the assets required by their unique portfolio needs. That is costly. While highly traded ETFs are quite liquid, they are nonetheless less liquid than dollars. Hence, the average employee would probably be better served by being paid entirely in wages and then purchasing the stocks and bonds that make the most sense for their situation.

There are exceptions to the strong version of this argument, which I have laid out above. But the more general point — that requiring firms to pay their employees in company stock or total-market ETFs is likely to make many employees worse off — remains after these exceptions are considered.

Suppose, for example, that paying an employee partially (say, 10 percent) in company stock boosts the worker’s productivity by an amount that makes the reduction in diversification or the costs of reallocating the portfolio to avoid that diversification worthwhile. In that case, the firm will choose to pay the employee partially in company stock without any requirement from the government to do so.

If the government requires something less than the desired amount (say, 8 percent), the policy will have no effect. If the government requires something more than the desired amount (say, 12 percent), it will tend to make employees worse off by requiring them to liquidate the additional 2 percent of the income they receive as stocks in order to acquire assets that are more suitable given their desired portfolio.

Suppose, instead, that a firm can acquire stock more cheaply on the employee’s behalf, perhaps by buying in bulk, than the employee could on her own and, moreover, that the discount is sufficient to make any resulting costs of reallocating the portfolio worthwhile. In this case, as in the previous case, the firm will choose to pay the employee partially in stock without any requirement from the government to do so. Again, if the government requires something less than the desired amount, the policy will have no effect. If the government requires something more than the desired amount, it will tend to make employees worse off by requiring costly liquidations to achieve desired portfolios.

If modern Marxists want to increase the extent to which employees are capital owners without making those employees worse off, they should consider policies that (1) reduce the costs of accessing financial markets and (2) educate employees about the benefits of saving and investing. And, if inequality is still a problem after such policies are adopted, they should address the issue head-on in the least costly way possible: redistribution financed through broad-based taxation.

Efforts to change the composition of payments to employees, like those suggested by Sanders and championed by many on the left, are likely to leave the intended beneficiaries worse off. Such a policy means workers must choose between holding an under-diversified portfolio or incurring higher costs to achieve the appropriate mix of assets given their unique circumstances.

William J. Luther is the Director of AIER’s Sound Money Project and an Assistant Professor of Economics at Florida Atlantic University. His research focuses primarily on questions of currency acceptance. He has published articles in leading scholarly journals, including Journal of Economic Behavior & Organization, Economic Inquiry, Journal of Institutional Economics, Public Choice, and Quarterly Review of Economics and Finance. His popular works have appeared in The Economist, Forbes, and U.S. News & World Report. He has been cited by major media outlets, including NPR, VICE News, Al Jazeera, The Christian Science Monitor, and New Scientist.