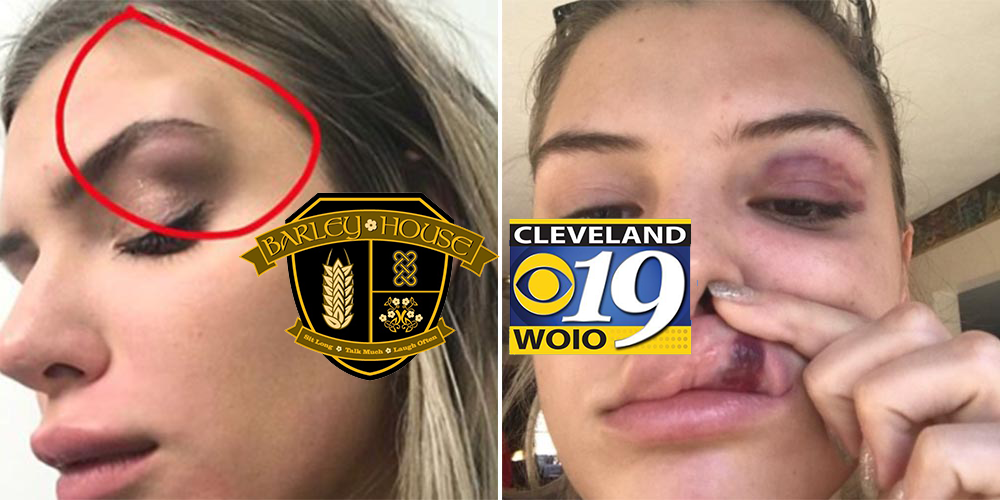 Let me fill you in if you do not know what happened to Alissa Violet the night she got battered by a female and male patron and sexually touched by a bouncer who works for Barley House.

For this unlucky couple, an innocent night out turned into a nightmare. On November 25, 2017, Ricky “FaZe” Banks and his girlfriend, Alissa Violet, went to Barley House, a pub in Cleveland, OH, to hang out with family and friends. According to Banks, as they prepared to leave the establishment, Violet decided to use the restroom. Banks wanted to wait for his girlfriend just outside of the restroom and claims that a few months earlier, Maria, a member of Barley’s management at another location, gave the couple permission to use the restrooms downstairs.

However, he was confronted by a bouncer who refused his requests. The bouncer told Banks to leave and, when he did not comply, put him in a headlock and dragged him away from the restrooms. Banks was then handed off to another bouncer who escorted him outside. 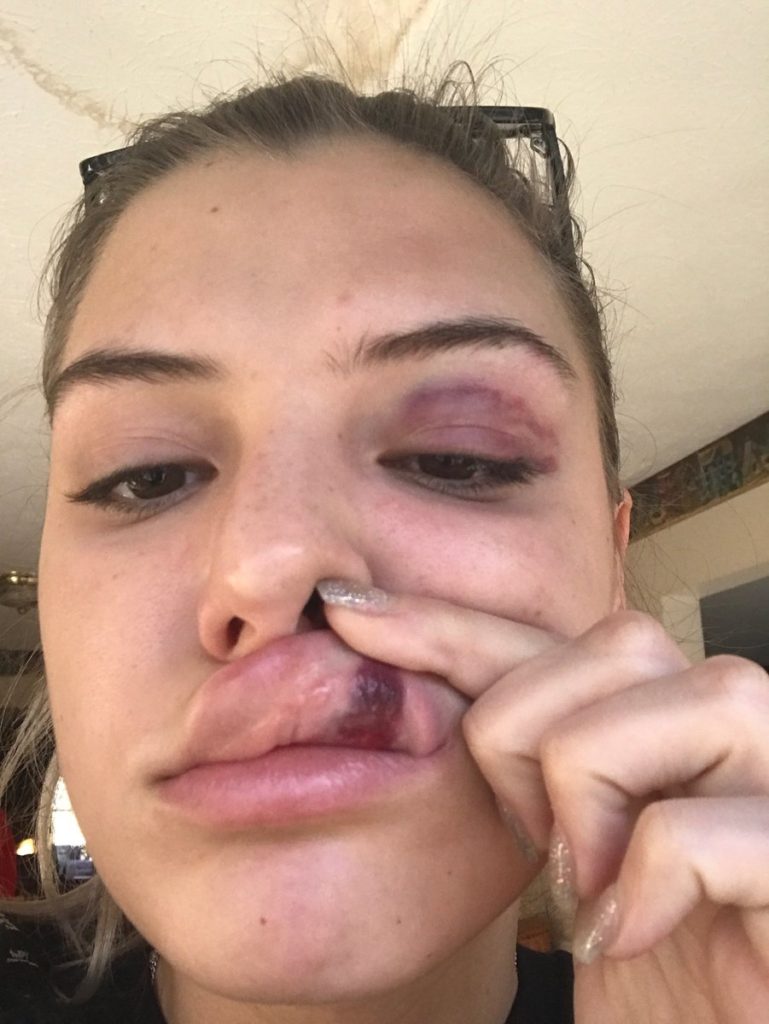 Outside, Alissa Gets Battered

Despite his removal, Banks was not ready to leave the scene. According to the couple, Alissa had been harmed as well. She claims that one of the bouncers pushed her down the stairs and that another grabbed her inappropriately. Thus, Banks wanted answers from the restaurant’s management in addition to the name of the bouncer who had attacked him, and a bracelet he lost during the encounter. However, he was unsuccessful, as some patrons, who wanted Banks and Violet to leave the area, became violent. Despite Banks’s attempts to protect her, Violet left the establishment with a black eye and bruised lip.

I have reached out to Maria, Banks, and Alissa for further comment. At this time, they have not responded back to my inquiries.

Barley House’s recent interview with Cleveland 19 tells a very different story. According to the restaurant’s management, Banks refused to leave a restricted area and then taunted the bouncers. (The offending taunt, caught on camera, was a dance move.) The rest of the narrative is similarly inconsistent with the videos of the incident. Barley House claims that Banks and Violet “were guided up the steps” towards the exit. However, the video shows that Banks was missing his baseball cap after he left the restricted area, suggesting that some altercation must have occurred.

The story also states that Alissa rode on the back of a bouncer while, in contrast, the video shows Alissa and two friends being pushed away from the stairs towards the exit. Cleveland 19 then reports that Alissa starts an altercation with another patron. However, the video released shows that the other patron became upset with Alissa because she was filming the incident and that she was subsequently attacked by a man and a woman. The most compromising part of the piece, which is a video clip of Banks throwing an object at someone else, is taken out of context. It paints Banks as the aggressor, though he was responding to the man who attacked Alissa.

But that’s not where the inconsistencies end. According to Corey May, owner and managing partner of Barley House, Banks came “out of nowhere and starts pounding this guy in the face.” However, the video shows no evidence of this having happened. Instead, it shows a woman hitting Alissa, and then a man pushing, choking and then beating her.

Barley, Show us The Full Video

Clearly, the story is incomplete. This is partly because the video alongside Cleveland 19’s story is clips of the full security footage strung together, as demonstrated by the discontinuity of the time stamps.

Barley House does not show what happened while the bouncers where guiding Banks up the steps where it is visible in the video that Banks lost his hat and his clothes appear to be stretched. If Barley House’s narrative is true, it is in their best interest to release the full-length, unedited recordings. It seems they selectively picked out clips to show Cleveland 19 during their interview. I challenge everyone who is reading this to take a few minutes and watch the interview, and you will see, for yourselves, there are missing clips to what occurred that night. At one point, the clip skips 20 minutes of footage and at times the time stamp is not visible.

I have reached out to Barley House via email, phone call and Facebook messenger asking if they plan on releasing the full footage of what happened the night Alissa got battered by a man. At this time, they have not responded back to my inquiries.

Even more problematic, however, is the original reporting of the story. Despite his recent induction into the Cleveland Press Club Journalism Hall of Fame, Paul Orlousky, the journalist who covered the story for Cleveland 19, failed to meet the most basic demands of his profession. For example, according to the couple, Orlousky did not reach out to them for a statement.

Moreover, the rhetoric he used to refer to Violet’s video (an “outrageous video”, in his opinion) unfairly painted Banks and Violet in a negative light. A quick look at Banks and Alissa’s YouTube channel and you will determine it is far from “outrageous videos.”

Lastly, though given the opportunity, Orlousky failed to demand a full video from the Barley House and release the evidence to the public. Evidently, even Orlousky realized the shortcomings of his first piece and later amended the article to include Banks’s interview with DramaAlert. Putting into question the ethics of Paul Orlousky and Cleveland 19/Fox 19/WAFB. As a journalist, we are taught to seek the truth and report the facts from all sides.

I have reached out to Paul Orlousky, Cleveland 19, Woio and Raycommedia for further comment. At the time of this Publishing, no one has emailed me back. 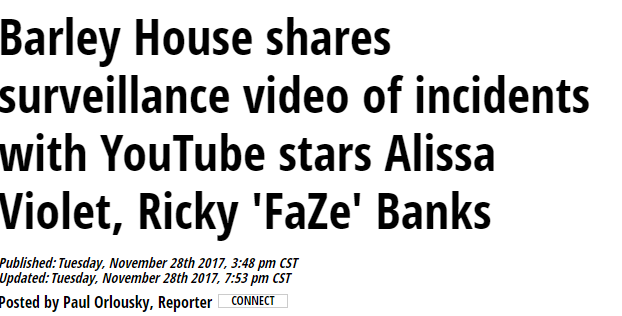 Was this merely an oversight, or was it a violation of journalistic ethics? Banks insinuated that Cleveland 19 and Barley House have a special relationship and that this relationship led to biased reporting of the incident. In an editor’s note, Cleveland 19 denies any financial relationship with the restaurant. However, I stumble upon an interesting comment from a few years ago (from an article that was covering Sean Heineman rape trial).

Sean Heineman is a former co-owner of Barley House. This comment sparked an interest in me to continue searching more in-depth into the relationship between Cleveland 19 and Barley House.

Oh, Look What I Found

Here’s a challenge, go to Cleveland19.com and search for Sean Heineman. How many articles popped-up? Two? Two articles. Keep in mind, many of Cleveland 19’s competitors covered the trial extensively and with more details. Now, go back and search for Barley House and tell me how many positive articles you can find. Many. 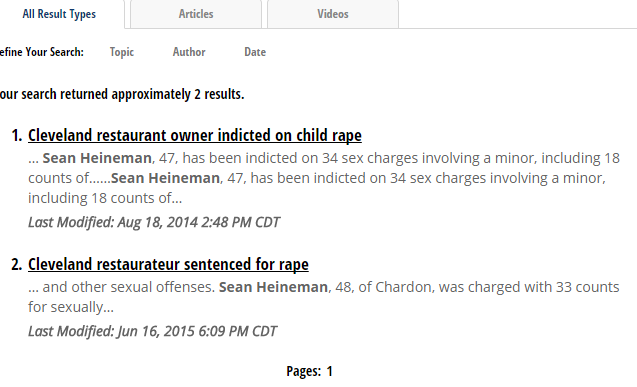 Before anyone yells “strawman!” there’s more, and I’ll leave it up to the readers to decide for themselves.

During my research, I stumble upon an interesting article. The article was found on Cleveland 19’s website. The title reads: “19 Action News employees were caught moonlighting at the Barley House.” I’ll leave it up to the readers to decide if Cleveland 19’s editorial team is telling the truth, there’s no personal relationship between Barley House and Cleveland 19? 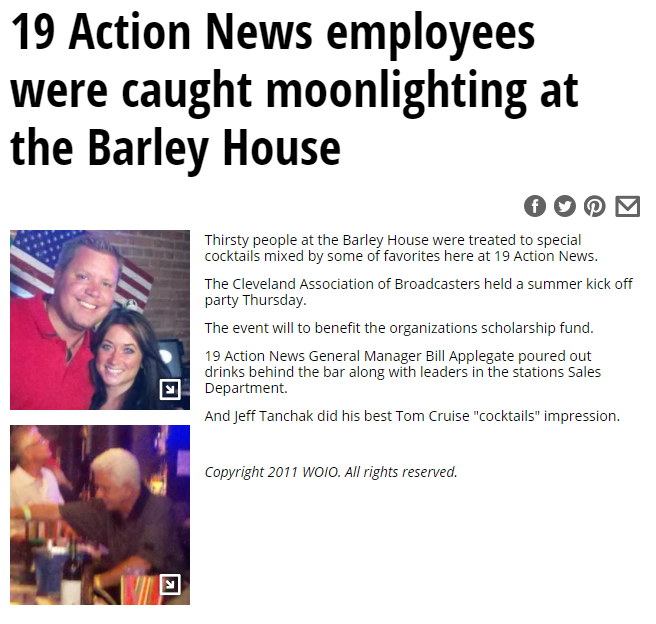 I’ll leave you with this, Barley House and Cleveland 19 do the right thing and report what matters. Who physically abused Alissa Violet? That’s what the headlines should read.

Full Disclosure: I am a subscriber to FaZe Banks and Alissa Violet.

A Non-Political Strategy for Freedom