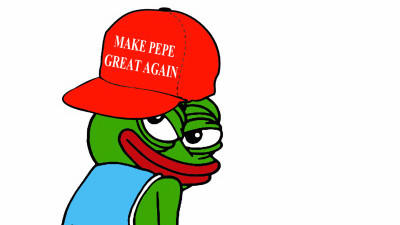 Written by Your Third Choice

Lawsuits have been filed and it’s official, this God forsaken frog won’t die any time soon.

Matt Furie has essentially declared war on the internet– rather he’s taking it to court. Among some of the more natural suits filed by Furie, he and his legal team also decided to send a Cease and Desist to /The_Donald/, on reddit.

In some rights, Furie is right. Many people have used the charterer to promote their own work without seeking permission. If the cartoonist wielded the powers he has under copyright and trademark laws effectively he could be able stop people from profiting off his work, however, the way Furie has turned the scrubbing of his creation into a political crusade only makes his endeavor an inevitable legal and social failure.

Furie’s lawyer made a statement saying, “Matt is going to aggressively enforce his intellectual property against anyone espousing racism, white supremacy, Islamophobia, or any other kind of hate,” and “He (Furie) was very serious when he said that we wanted to make clear that Pepe was not the property of the alt-right and couldn’t be used by the alt-right,” solidifying his selective and legally questionable enforcement of his intellectual property rights.

Although Matt has every right to keep people from advertising with his character, he cannot stop the public or media creators from using and remixing him at their will within content they make. Some of the DMCAs issued will be challenged, some with more grounds than others. Baked Alaska, a white nationalist ex-Buzzfeedist, used the frog meme as designed by his own artist, on his book’s cover. The law, in this case is on Matt’s side.

But not all the claims have remained within the realm of possibility.

Claims made against /r/ The_Donald should be laughed off, obviously, but in cases like that of Mike Cernovitch using an originally modified animation based off the cartoon frog in his blog post it seems clear that legality isn’t the genesis of Matt’s endeavor to cleanse the internet.

Cernvoitch’s case is particularly intriguing because he used Pepe in the most transformative and least marketed way. The animation posted by Cernovitch was within his article and was used to make a point. Motherboard, who originally reported this story  on the other had, have used Pepe’s likeness in each and every article’s headline photo about the ongoing  struggle for the morality of green frowny face. Leaving many to wonder, “Can I post an article with Pepe as an eye grabber? Or am I too conservative…”

I think a safe guide rail when predicting the outcome of these intellectual property rights lawsuits is Disney. What has Disney, the mega corporation specializing in legal hard-ass-manship, let slide? If the meme maker thinks his frog is worth more protection that Micky Mouse, he will be in for a rude awakening. After all, most people have seen South Park’s take on the beloved rodent.

Furie’s legal overconfidence pales in comparison to his social miscalculations.

It hardly merits saying that the internet has been having a field day. Before it seemed like Pepe was destined to fade into memory like Hillary Clinton, but, just like the old bag, this effing frog keeps getting jolts of life from culturally disconnected, rich, sanctimoniously moralizing, white people. Obviously, the contrarian counter culture is only being fed by the attention their cyber pranks get. As far as reddit and the chans are concerned, Pepe’s power has yet to peak.

I can hardly tell which party is which in times like these.