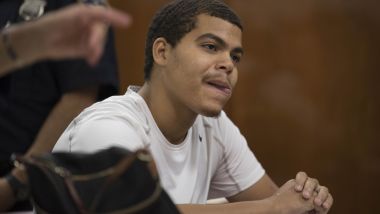 A high school student punched his principal for telling him to turn down his music, and the impulsive teen was sentenced Friday at the Manhattan Supreme Court.

A judge awarded Luis Penzo, 19, with youthful offender status and a conditional discharge, thanks to his successful completion of a family therapy program. Penzo’s sentence allows him to forgo prison time and a criminal record, provided he instigates no further charges over the next three years, the New York Post reported.

Penzo was listening to music on his headphones when Principal Matthew Tossman asked him to turn down the volume in October 2016. Penzo reacted by dropping his headphones on the floor and leaving his music blaring. When the principal tried to pick up his headphones, Penzo attacked him, according to prosecutors.

“He grabbed my Beats and was very aggressive so I lost control,” Penzo said, according to court papers. “I hit him two times.”

Why are Americans Obsessed with Buying Organic?

Artist Doubles Down on Attempts to Kill Pepe- Internet Laughs