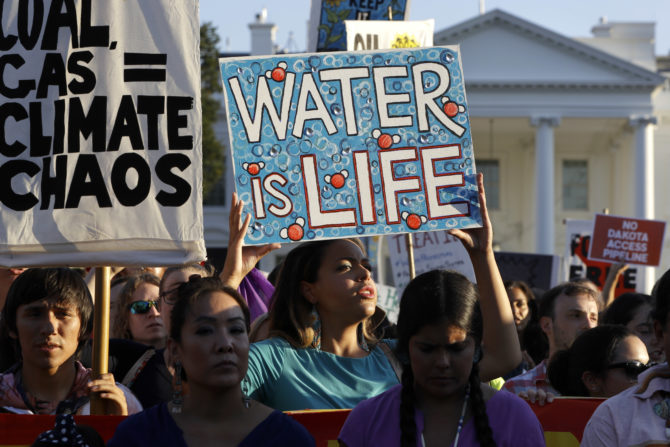 Environmentalists accused the head of the company behind the contentious Dakota Access Pipeline of committing genocide during demonstrations against a Texas oil pipeline.

Tane Ward, the organizing manager for environmentalist group Sierra Club, directed a series of protests at the Texas Parks and Wildlife Commission’s meeting in Texas meant to hash out the future of the Trans-Pecos pipeline. The 148-mile project would transport natural gas through the Big Bend region in Texas to Mexico, but Ward called it the remaining vestiges of what he called a failing capitalist system.

Protesters at the Sierra Club-sponsored demonstration can also be heard chanting slogans such as “K-e-l-c-y … you’re committing genocide,” which presumably is a reference to Energy Transfer Partners CEO Kelcy Warren, whose company is developing the so-called DAPL.

Warren has become a lighting rod of controversy thanks to his position with the company and his support for President Donald Trump, who signed executive orders last week approving both the Keystone XL  and Dakota pipelines.

Activists are trying to leverage some of the successful demonstrations against the DAPL on the Trans-Pecos — in particular, they are setting up campsites near the project’s construction site and planning nonviolent “direct actions” against those building it.

The Two Rivers campsite popped up a month after the Army Corps of Engineers rejected a previously approved route for the nearly 1,200-mile-long DAPL project, a pipeline spearheaded by the same developer behind Trans-Pecos.

“We’re going to follow the same model as Standing Rock,” Frankie Orona, executive director of the Society of Native Nations, told reporters on Jan. 9. “This is a huge historical moment for environmental issues, for protecting our water, protecting our land, protecting sacred sites and protecting treaties.”

Ward kick-started the Jan. 26’s demonstration against Texas Parks and Wildlife Commission with several belligerent outbursts. He accused the commission of engaging in “fascism” simply for considering the Tecos Pipeline’s fate. He also characterized the project — and pipelines in general — “as the last violent gasp of a dying beast. Capitalism is dying.”

Another Sierra Club member — Lori Glover, who chairs the group in Beg Bend — said she would oppose the project even if regulators deemed it environmentally safe. Glover was recently charged with felony criminal mischief and criminal trespassing. She was also arrested at a December protest resulting in a misdemeanor trespass charge.

Big Bend Conservation Alliance, one of Glover’s groups, worries the project could “open the door to additional industrial infrastructure and destroy the pristine nature of the region.” Its members also want the government to conduct an environmental assessment to ensure the Trans-Pecos line won’t pollute the Rio Grande River or other watersheds.

Research shows that pipelines are a safer way to transport oil than truck or train. Oil leaks from pipelines are safer than leaks created by train derailment and truck wrecks, namely because of the difference in safety measures, according to a study conducted in 2015 by the Fraser Institute, a think tank in Canada.

Who Are We? Trump’s Immigration Executive Order and the Story Fred Korematsu