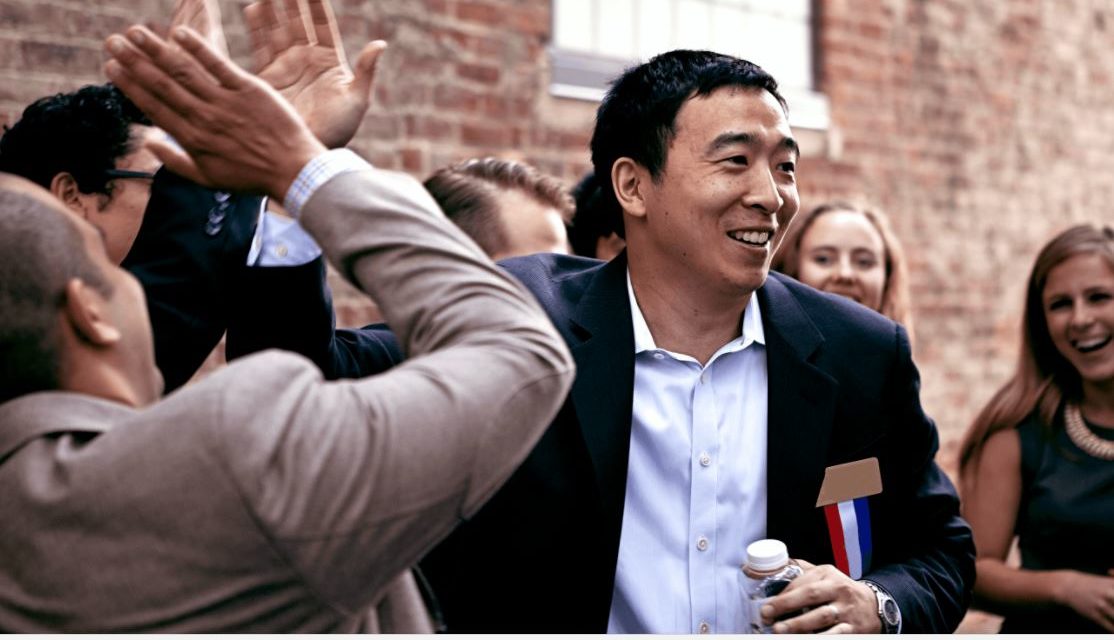 Andrew Yang, presidential hopeful, is unusually articulate about work, changed economic conditions, and the failures of existing welfare. He is garnering an unusual amount of support among the candidates.

My theory why he is trending is that he is changing the subject from climate apocalypticism, class warfare, and resentment-filled group hatreds to something else entirely. He considers dramatic economic change a fait accompli and is seeking ways for us to deal with it as a society. You can disagree with every one of his proposals and still grant that his tone and topic is a much-welcome relief.

That’s the nice part of my article. Now I have to pick on a single aspect of his signature issue, the desire to replace the existing welfare system toward a Universal Basic Income as funded by a new Value Added Tax.

Yang has appeared on the New York Times podcast (millions of listeners) and made a strong case.

The interviewer asks: “What is it that this income guarantee allows people to do that they couldn’t do otherwise?”

To which he answers as follows:

“I’ve been giving the freedom dividend to several families around the country for the last number of months. And I just saw one of the recipients, Kyle Christiansen, in Iowa. So Kyle is living in Iowa, Falls, Iowa with his mom who is recovering from cancer. He’s been getting a thousand bucks a month from me for a number of months. I just saw him a few weeks ago in Iowa, and he seemed like a different person. He came to me and said, ‘I used some of the dividend on a guitar and I’ve been playing shows for the first time in years and this band now wants me to perform with them next week’. He was so proud and he was beaming when he told me this. The thousand dollars a month in many ways is about everything but the money. It’s about our humanity and what we would actually value. It’s car repairs going from a crisis to an inconvenience. It’s home repairs and going back to school. So when you translate the money into what it means in people’s lives, it means the things that make us human.”

This is an extremely compelling story. Probably you have some stories yourself of when you helped out a person in need financially and it made a huge difference in their lives. Charitable organizations can report millions of such cases.

But what are we to take from this example? Note that he personally provided the money and did the follow up. Why conclude from this that we need a vast new government program? Why not conclude that private charity actually works to improve lives when it comes with some sense of gratitude, inspiration, and accountability?

Andrew Yang’s interesting stories about how much good his personal charity has done provide a lesson very different from the one he draws from it. It means that the universal basic income (or just call it charitable provision) can work provided it is privately administered.

The current nonprofit sector employs 10 percent of the American workforce. Americans give close to $400 billion now to this sector. A quarter of the population volunteers for organizations without pay, which is the equivalent of another $200 billion in services donated. That’s wonderful but imagine how much larger this would be if people could keep more of their money to use in different ways. And consider the change that would happen if the “I-gave-at-the-office” mentality went away along with the non-functioning welfare state.

Incredibly, before the age of the welfare state (which was created because elites thought that private charity was too generous), private charity made an even more substantial contribution to American life.

A great example is Mother Cabrini of the Missionary Sisters of the Sacred Heart of Jesus. They opened orphanages all over the East and West Coasts, managing hundreds of properties including hospitals, schools, and even silver mines. Their focus began with orphans but kept expanding outwards. They had a highly successful system focussed on getting people on their feet to live good lives.

But for the “Progressive” intellectuals of the period, these institutions were considered unprofessional and entirely too undisciplined, and they sought to displace these institutions with secular and publicly funded services. They succeeded. Between 1905 and the mid-1930s, the welfare state was built and came to replace private provision. Funding sources dried up following the double blow of the income tax and estate tax, together gutting the fortunes that had been so generous to charitable institutions.

Public provision did not make up the difference. It wasn’t intended to. It was supposed to be more parsimonious. But the big change was regulatory. A great example of early efforts is the minimum wage. When it was first presented, it was designed not to raise the wages of the poor but to raise the bar of entry into the workforce as high as possible so as to exclude “unfit” portions of the population.  The same story can be told about maximum hours legislation, immigration restriction, marriage licenses, public schools, business regulation, and so much more. The rationale was slightly different in each case but the main goal was the same: to control and manage the population through coercion.

Yang knows that there is something profoundly wrong with the current welfare system and imagines something much simpler, something that would mean a genuine need for some income security. The problem is that I suspect he is imagining something that is best provided for privately, as it once was. Late 19th-century charitable institutions were fascinating and workable. Had they been permitted to continue to thrive, we might by now have something resembling a privately funded universal basic income – similar to what the Church of Latter-Day Saints provides for its members.

What Yang is doing here, with every good intention, is porting over success stories from the private sector and imagining that these stories would only become more pervasive if the same were administered by people with more intelligence, power, and resources. In short – among many other problems with the UBI – he is reinventing the great mistake of all public policy from time immemorial.

Now, to be sure, Yang lists dozens of other cases that he claims are successful implementations of UBI. I leave it to others to examine them.

As for making public policy out of private experience, we don’t usually imagine such things in other aspects of life. Most people would see immediately the error in a statement such as, “Religion can be good for people, therefore let’s have the government provide a Universal Basic Religion.” It’s the same with an income guarantee. Government has an uncanny way of taking a good practice in the private sector and ruining in.

Democratic Debate Gets Personal As Candidates Go For The Jugular