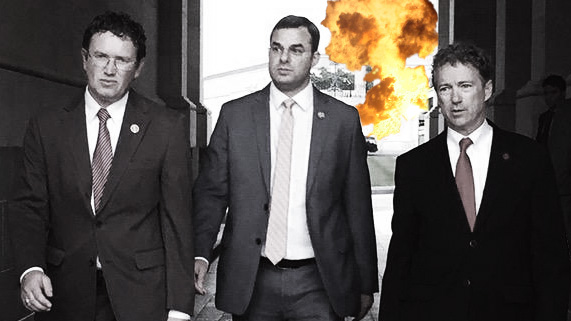 The American Health Care Act, which was touted by establishment Republicans as the perfect Obamacare replacement but the more liberty-minded GOP members in the House and Senate argued as being merely “Obamacare lite,” has been killed. This bodes much better for the libertarians in the GOP than the event of the weeks leading up to now, with the most infamous moment being when Senator Rand Paul was physically barred from entering the room where secret negotiations on the bill were apparently underway. But now, the true might and determination of Dr. Paul’s wing of the GOP has finally blared mightily through the obfuscating noise and chest-pumping of Trump and his loyalists. After the libertarian billionaire Kochs also drew a line in the sand against Trump, the scales were finally tipped in the classical liberals’ favor, and the bill was pulled.

What now? And what does this signify regarding the overall influence of libertarianism in the current version of the GOP?

According to Rare‘s Jack Hunter:

Before Ron Paul’s 2008 and 2012 presidential campaigns spawned a “liberty movement” of activists and political leaders, the influence of which is still being felt to this day (just ask Barack Obama or Donald Trump), you would have had a hard time finding libertarians in Congress period, with the exception of Ron Paul.

But today, and for some time, libertarian Republicans have actually had measurable political clout. This has certainly been true on the foreign policy and civil liberties fronts, where, in 2013, it was Rep. Amash who spearheaded the effort to reign in the NSA’s controversial mass surveillance practices with a bill that was unsuccessful by only 12 votes. Some could argue that Sen. Paul has been instrumental in shaping President Trump’s state and defense cabinet with his denunciations of prominent neoconservatives whose names were floated.

If Rand and co. really cause a shift in the GOP, and that trend continues, we may just see things change for the better in the coming months and years of the Trump administration.