In Britain, a note left in a package to a Jewish customer has landed a former employee of Amazon in the unemployment line, reports the Daily Mail.

The ex-employee of the online shopping megastore, reportedly put a note in a package which read, “Greeting from Uncle Adolf.” The package was in route to a Jewish woman, who has purchased a toy for her niece. 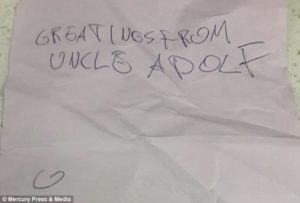 The Daily Mail explains that the worker was able to identify the woman as Jewish based on her last name, and that after the employee’s firing, the situation is being investigated as a hate crime.

The woman, who is reportedly in her 30’s, asked not to be named, says that she was so upset by the incident that she had to take a couple days off of work to cope, the report explained.

“When she told us about the note she was shaking – she’s a very gentle and humble lady,” Liran Meydat, and irate friend of the woman said.

Meydat told the Daily Mail that Amazon failed to take the situation seriously until he shamed them on social media.

“British Jews feel scared to speak out. I’m an Israeli and have lived here for a few years so I don’t feel scared,” Meydat continued. “When I heard what had happened it made me think about my grandfather who showed me the number on his arms from the Nazi camp in German-occupied Poland. He lost all his family there.”

Meydat, according to the Daily Mail report, was not only one to bring the incident to the attention of Amazon, but to the British authorities as well saying, “The Met took it very seriously, we’re very happy about how they’ve handled it. The only exception is Amazon. We contacted them on the same day and didn’t hear anything back. I’ve now given them hell over it and they are now saying they want to wait for the results to come back from the police.”

The Daily Mail says that an Amazon spokesman addressed the situation stating, “We take this incident seriously and have apologized to the customer. We have investigated the matter and dismissed the individual involved.”