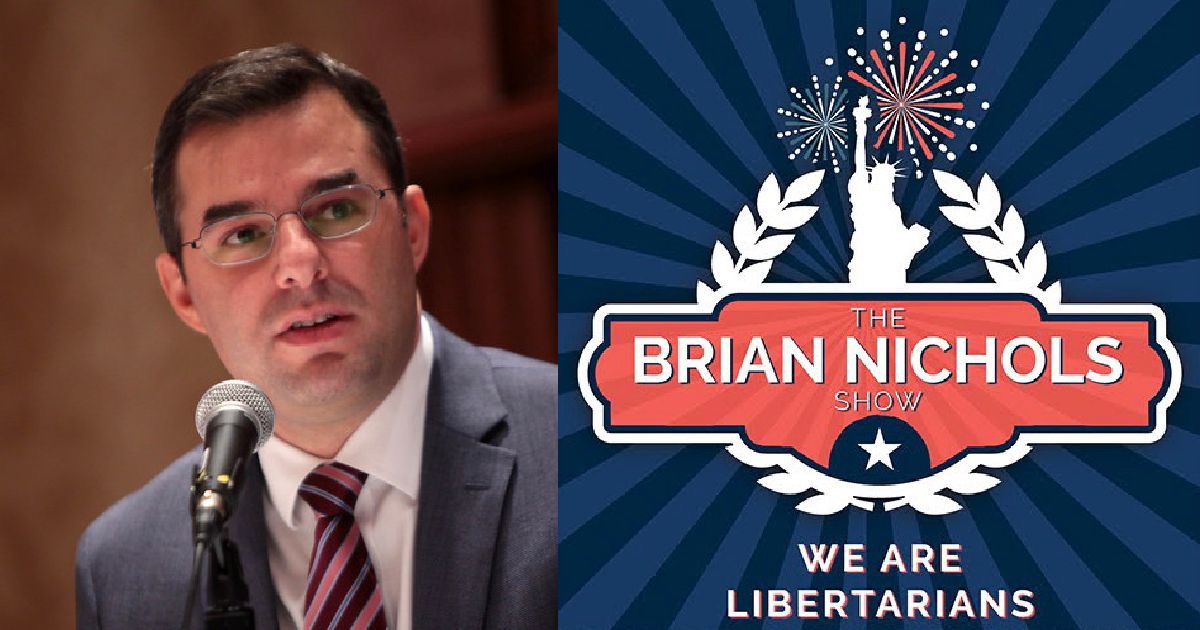 [Listen to the full interview by Brian Nichols below]

In an interview released this morning on the Brian Nichols Show, Justin Amash talked liberty, independence, impeachment, the future, and FISA. He also talked about the Libertarian Party, the current state of the GOP, and what may lie ahead… both for him personally and his current party.

Who is Justin Amash and what does he stand for? Well, that’s one of the first things he addressed.

“I’m a big believer that you need to come here and uphold your oath to the Constitution, and try to advance principles of liberty. And, and I’ve done that, and my district, when they vote for me, they know they’re voting for someone who’s going to go and follow his principles, and not go there just to go with the flow or, you know, pay attention to all the polls on a particular issue. I’ve got to do what’s right, according to the Constitution and the rule of law, and protecting the liberty of everyone in my district.

So that’s what I do. I’m a libertarian. I’ve always described myself that way – libertarian, constitutional conservative. Some people might call me a classical liberal. That might be actually a closer description to what I am, which is, for those who don’t know, very different from modern, progressive liberal.”

Obviously, the assumption is that he feels he can advance liberty through his position in Congress, which he’s now held for eight years, having ridden the Tea Party wave into office. He talks about how his time in politics began and how the political landscape has changed:

“When I started out, a lot of conservatives were very focused on limited government, and free markets and protecting people’s rights. It was about really, I guess, classical liberal ideas, constitutional conservatism… the kind of things that, you know, the founders talked about. Many of the founders and many famed conservative and libertarian scholars. So, like, it was it was very much aligned with sort of traditional conservative philosophy.

And in the past decade, gradually, we’ve seen people move more toward nationalism and populism and, actually, bigger government. I think of a lot of the Trump movement, for example, as being a big government movement. It’s a movement towards using the power of the state in a different way. A lot of the things that are talked about are really about increasing the state’s power.

Even the way the president declares emergencies for things that he thinks Congress is not handling properly, is, that’s an increase in the power of the state. That’s the President saying, ‘I know better than the American people through the representatives, I’m going to assume more control. I’m going to grow government in different ways’. Spending is skyrocketing. And people are okay with it. So, I think that gradually, you’ve seen a lot of the sort of big government movement within the Republican Party spring up, and it’s very much a nationalist populist movement. And it is now a dominant force, at least on the political side.”

If he sees his rise in politics showcasing a Tea Party movement that gradually deteriorated to more nationalist and populist sentiments, what does he believe the future holds for his party post-Trump?

“What I expect is probably the GOP will revert back to more of a neoconservative stance. More of an establishment neoconservative approach, maybe represented more by people like Marco Rubio, and some of these others. Where it’s, it’s big government in a different way.

So like, you’ve got the, you know, you got the big government nationalist, populist thing going on right now with President Trump. And I think you might move back toward a big government militaristic surveillance state sort of thing under, you know, under a Marco Rubio or someone like that. Not that the President has, frankly, has reduced our, our involvement overseas, or, or limited the surveillance state. Those are as strong as ever under, under President Trump. But they’re, they’ve been de-emphasized in many ways, versus what, a lot of the neoconservatives would do.

So I’m not sure – I think it moves back more in that direction. And I think that, like I said, there are more people within the party who are not nationalists or populists and more people in the party who are not neoconservatives. I don’t think those are the majority of the party. But those tend to be blocks that are maybe more organized than some of the other blocks. And so when they get when they get rolling, like you have with Trump right now on the national populist stuff, they have a lot of momentum. And it’s hard for the other parts of the party to overcome them. But you know me, you never know, like, over a long period of time thinking things can change, and I just don’t see it. I don’t see it changing dramatically in the near future, other than maybe reverting a little bit back more to the neoconservative side.”

For now, Amash’s latest push is for FISA reform, which he has long championed. He talks about his latest amendment to address what he feels is an unconstitutional overreach:

“My amendment recently, this was this week, would limit 702 collections. So the way I think, for those who are not very familiar with surveillance laws, FISA 702, involves at least two Fourth Amendment violations, two pretty clear ones.

So how did it turn out? The House is currently controlled by Democrats, who have often portrayed themselves as libertarians on fourth amendment issues, at least since the Bush years. One might think it had a shot in that chamber, at least.

“Where I was disappointed with on the Democratic side – Democrats have typically said they’re opposed to the surveillance state. They voted with us in the past on these issues, to protect people’s rights. And I can usually expect about 75-80% of the Democrats be with us on an issue like this.

Unfortunately, this week, more than half of the Democrats voted against my amendment, which shows how much politics comes into play. I think what’s happening is there’s all this talk by the President about FISA abuse, and the Democrats, now they want to look strong and look that like they support FISA because the President’s complaining about FISA.”

You can listen to the full interview on the Brian Nichols Show HERE.

Brian Nichols is the host of The Brian Nichols Show. He obtained his Bachelor’s of Arts in Political Science with a concentration in American Government and Associate’s Degree in Business Administration with a concentration in Marketing and Management and has served on multiple political campaigns, including local, state, and federal campaigns. He also co-authored a published academic paper that explored the concept of a professional legislature that focused on the application of “professional legislatures” to county legislative bodies.

His goal is simple: to have a show that discusses today’s news in an objective manner to ultimately find common ground between individuals of differing ways of thinking.

He currently acts as an Associate Editor for The Libertarian Republic and Chapter Leader for AFF Philadelphia. When not taking part in political discourse, Brian enjoys watching the Dallas Cowboys, reruns of The Office on Netflix, and going to the gym.

7 Daily Habits That Are Harming Our Planet

How to Do Online Shopping Without Cash