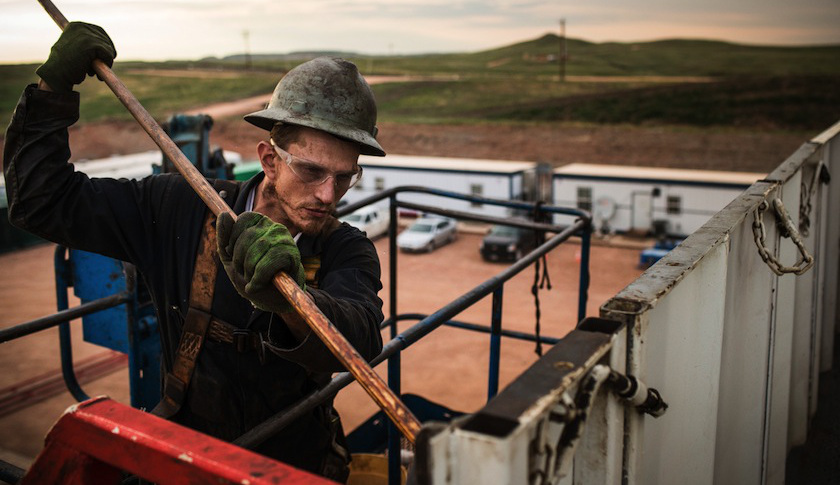 “No, don’t pull on that line!” yelled Rex Moore, as he watched the crew of a natural gas drilling rig struggle to work on a frigid and rainy day in Williamsport, Pennsylvania. Despite Moore’s 40 years of gas industry experience and the crew’s efforts, the well proved dry.

In fact, this dry well is part of a mock rig at the Pennsylvania College of Technology’s ShaleNET program. The program teaches the basics of gas drilling to future roughnecks. Moore is their instructor. A light snow began to fall as gusts of wind hit the mock rig, and Moore let his students put-up plastic tarp wind shields as a barrier.

“I finally felt sorry for them,” the hard-nosed instructor said with a smile.

The natural gas workers hope that Pennsylvania Gov. Tom Wolf will show similar pity on the shale gas industry. The area’s economic gains may be under threat from Wolf’s new tax proposal. The currently low natural gas price means drilling is at a near halt in Lycoming County. The proposed new taxes could drive jobs to other states when investment returns.

“At the peak we had Halliburton employing something like 600 people in the county,” noted Vince Matteo, the head of the Williamsport Chamber of Commerce.

Marreo’s office is housed in a neo-classical downtown building that was once a bank. Though Halliburton has shed some 27,000 jobs around the globe since 2014, the oil field services company remains committed to the area. As of last year, Halliburton was still the tenth largest employer in the county.

The shale gas boom was in many ways déjà vu for the Williamsport area. The region experienced a timber boom from the mid-19th century to the early 20th. The Susquehanna Boom, an artificial dam, captured logs floated down river by lumberjacks to the area’s hungry lumber mills. A strip of historic Victorian mansions known as “Millionaire’s Row” on Fourth Street and the local high school’s mascot (the Williamsport Millionaires) reflects the wealth of that era.

Brent Fish, who runs a local real estate agency, noted that Williamsport has a solid economy.

“Even before the boom Williamsports and Lycoming County more generally had a diversified local economy with well-established health care, higher education, manufacturing sectors and good infrastructure to support it,” he explained.

Locals remember well how the shale gas boom began in 2007. Day-after-day representatives of oil and gas firms waited anxiously in long lines to look up property records at the local municipal building in order to start businesses. The city was the seventh-fastest growing metropolitan area of its size in the country by 2010, according to figures from the U.S. Bureau of Economic Analysis. Williamsport’s economy rose from $2.96 billion in 2005 to $5.13 billion in 2014, according to the U.S. Labor Department.

Between the lumber boom and natural gas boom, Williamsport found baseball. In 1939, the town created Little League baseball and now hosts the annual Little League World Series. During the cold winter days, children filled the air of the Williamsport arena with the ringing metallic “ping” of aluminum baseball bats.

The boom also brought new restaurants and small businesses to the town. A few blocks beyond the Chamber of Commerce on Fourth Street is the Liberty Arena. This 81,000-square-foot indoor sports facility opened just last year.

Six new hotels or motels opened in the Williamsport area since 2007. There is less activity, however, at these hotels.

“New lodging companies came to Lycoming County because of the natural gas boom and occupancy has been decimated by the drop in shale gas production,” explained John Longstreet, the president and CEO of Pennsylvania and Restaurant and Lodging Association.

“When things first started, it was a real challenge in the beginning to find and train a local work force,” he said. “I was on flights to Pennsylvania full of gas workers headed to the state from Texas.”

At the beginning of the boom, gas workers from Louisiana and Texas helped keep the occupancy rates high at these hotels. They also brought with them their own culinary preferences. The town saw two dueling barbecue joints open during the boom that used large billboards to announce their presence to natural gas workers and long haul truckers.

Matteo admitted a few locals were critical of the town’s newfound status as a natural gas development hub.

“There were groups trying to sell gloom and doom here,” he said. “That never happened. What people saw is that their son or their neighbour’s kid came home because they got a job in the industry. I think the most common complaint some people had was we saw a lot of truck traffic on rural roads.”

A block away from Matteo’s office, Aaron Hughes, a Lycoming College artist in residence, was working with Iraq War veterans and students on an art instillation concerned with those very trucks.

Hughes is an army vet who saw numerous Halliburton trucks crisscrossing Iraq during his tour. Hughes came to Williamsport for the first time in 2010 and feared northern Pennsylvania was starting to look like northern Iraq. A table in one corner of the studio featured ammo and was used to carry art supplies and a few books critical of the natural resource industry. The central image of the instillation was a black and white stencil of a convoy of Halliburton trucks.

“I’m not going to say what is better for the community, what I can say is if we want to survive as a society we have to look at our dependence on natural resource extraction,” Hughes offered. “We can’t sustain the way we have been doing things.”

It was with an eye to sustain the growth of the shale gas boom that Pennsylvanian voters passed Act 13, which placed a tax known as impact fees on natural gas producers. Lycoming County reinvested much of its economic windfall in infrastructure and educational programs, like the Pennsylvania College of Technology’s ShaleNET program.

At the height of the boom, Halliburton interviewed each graduating class. Direct employment between 2007 and 2015 in natural gas increased from 9,017 to 28,925, according to the Pennsylvania Department of Labor and Industry. ShaleNET program graduates would expect to earn as much as $70,000 a year working in the gas fields. Some 71 percent of new hires in 2010 in natural gas and associated industries were Pennsylvanians, according to a  study by state labor officials.

Governor Wolf’s Plan or The Wolf of Fourth Street

Wolf took a turn operating the model rig alongside instructor Moore during a visit to Williamsport in April of 2015. Wolf stuck an ecumenical tone during the visit, promising to preserve the benefits that towns like Williamsport have seen from the boom. While campaigning for the governorship in 2014, however, Wolf promised to raise taxes on the gas industry.

In one TV commercial, Wolf promised to “make the gas companies pay up to fund our schools.”

Wolf is now calling for a 6.5 percent severance tax that he says will bring an added $217 million to the state’s coffers. It’s a much lower tax than Wolf originally called for, which he said would generate hundreds of millions more. Wolf’s 6.5 percent tax is not even enough to fund the state’s budget for educational instruction and teachers.

Wolf may have successfully run the family business he inherited, but business leaders have been critical of his policies.

“When we first got to know him we thought that he would be more prudent,”Longstreet said. “But, he has been tone def toward understanding what is needed to create jobs.”

“Two great presidents Bill Clinton and Ronald Reagan both pivoted after first-term congressional election defeats and reach across the aisle to form bipartisan consensus. Wolf needs to show a similar spirit of bipartisan leadership,” he said.