7 Things we learned from the Tulsi Gabbard-Hillary Clinton showdown 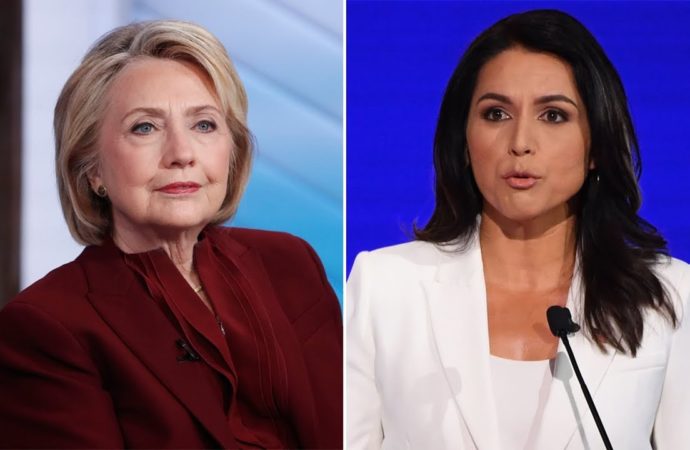 Alright, raise your hands if you predicted that Tulsi Gabbard and Hillary Clinton would have the most explosive duel in the 2020 Democratic primary. Now put your hands back down, you liars.

It came out of nowhere and completely consumed the Internet, with Clinton starting it all by bizarrely suggesting Gabbard is being groomed by the Russians for a third party presidential run. Then Tulsi responded with a huge mic drop, and here we are. Here’s seven things we’ve learned from this whole showdown.

1. Hillary Clinton is now fine with taking a page out of Trump’s playbook

Hillary was, of course, the Democratic nominee back in 2016. She famously went on to lose perhaps the most winnable matchup anyone could’ve asked for, in part because Trump didn’t play the game of politics that Clinton and everyone else did. He had his own style, mostly predicated on making stuff up.

In suggesting that Gabbard is a Russian asset, as Clinton did, she’s taking a page out of the Trump playbook by coming up with a complete and total falsehood, offering it up to the media with nothing to back it up, and then sitting back to let things play out. After lambasting Trump three years ago for spreading false information, it’s fascinating to see Hillary now doing the same thing against one of her own.

Before Hillary embarked on her destined-for-failure general election campaign, there was the primary. Initially expecting to cruise to victory, she found significant competition from an old, white socialist named Bernie Sanders, and it wasn’t long before the higher ups in the DNC started to help Clinton out.

Gabbard, who was the vice chair of the DNC at the time and designated the rising star of the party, publicly resigned from her post, called out the DNC, and endorsed Bernie. Later, we would see through leaked emails that the DNC considered Tulsi a traitor for her actions, and it seems Clinton still hasn’t gotten over it.

Hillary Clinton is understandably an intimidating political figure in the Democratic party. She’s a former First Lady, and arguably the most influential First Lady ever, and after that she became a senator and the Secretary of State. In many ways, she’s more the face of the party than Obama was, and as such there are very few Democrats who are willing to cross her. Even Bernie endorsed her after evidence showed the primary was rigged against him in her favor.

But Tulsi is one of the few dissenters, and she’s obviously not afraid to call Clinton out for her terribleness.

Gabbard’s savage Twitter thread most notably awarded Clinton a factual nickname: the Queen of Warmongers, a phrase which became the third most trending hashtag by Friday night. While Gabbard’s actions in 2016 were more anti-DNC than anything, she’s now fully opposing Clinton, which is a big deal still.

Lost in all of this is the underlying principle that Hillary was espousing: the Russians were behind Jill Stein’s Green party presidential campaign (of which there is zero evidence despite multiple claims of such) and a 2020 third party candidate will also be supported by the Russians. This is, of course, total crap.

Hillary's assertion that Jill Stein is a "Russian asset" is also a craven, debunked lie. Everyone who is inconvenient to the Democratic Party is now being surreptitiously controlled by Russia. That's the deranged political climate we're in, congrats to all who helped foster it

If HRC really believes all independent campaigns are Russian plots, why isn't she calling for #RankedChoiceVoting to make it impossible for evil foreigners to "split the vote"? Until she does, all this Russia hysteria just looks like cynical McCarthyist left-punching. https://t.co/K3cL0V0Tma

Russian bots for @DrJillStein didn’t cost @HillaryClinton the election… but her camp’s idiotic decision to go on the attack against @GovGaryJohnson (incl. PAC spending by @TomSteyer) helped drive two to three points from him to @realDonaldTrump in the final month or so.

5. Hillary still has no idea how politics works in the age of social media

If Hillary’s goal behind this was to decapitate Tulsi Gabbard’s campaign, then she failed in spectacular fashion. Not only is Gabbard now being talked about on every news channel and all over Twitter, but it’s creating an entirely new base of support for the candidate whose campaign was already on the down swing. She’s even received public shows of support from Andrew Yang, Marianne Williamson, and Sanders’ campaign manager, which is significant.

The Democratic establishment has got to stop smearing women it finds inconvenient! The character assassination of women who don’t toe the party line will backfire. Stay strong @TulsiGabbard . You deserve respect and you have mine.

Tulsi Gabbard deserves much more respect and thanks than this. She literally just got back from serving our country abroad.

6. Van Jones of CNN gave a rare rebuke of Clinton over the Tulsi smear

It’s no secret that CNN is a news organization that generally leans to the left, although not necessarily to the extent that many make them out to be. Still, it’s a pretty rare thing to see anyone on their channel calling out Hillary for anything, but that’s what Van Jones did Friday night.

Great point made by Van Jones concerning the treatment of Tulsi Gabbard by the DNC and establishment elite. They are attacking her for supporting Bernie over Hillary in the 2016 primary. #YangGang stands with #Tulsi2020 against this smear campaign! pic.twitter.com/dadYyUt6Pt

The outcome of the 2016 election is still a shocker, but the power of retrospection has allowed many to see the reasons why it went the way it did. A big part of it was due to the Clinton campaign’s arrogant strategy that helped Trump pry the electoral votes from Wisconsin and Michigan out of her hands, as well as some vague populist themes Trump used to appeal to independent voters who were alienated by the establishment politics of both parties.

But between Hillary continuing to insist that the only way Democrats can lose is through Russian interference and the many, many Democrats who continue to embrace their failed candidate from the previous cycle, it’s clear that Democrats still have no idea why Trump actually won the electoral college in 2016, and those who don’t learn from the past are doomed to repeat it.