Trump’s Rhetoric Has Changed Significantly Over the Years

In recent weeks, Donald Trump has surprisingly become one of the front-runners for the Republican Presidential nomination in 2016. When listening to his stump speeches, it is difficult to distinguish Trump from any of the other Republican contenders, as he has recently adopted many of the policies espoused by the rest of the Party. However, it wasn’t always this way. Here are Trump’s top ten flip-flops. In 1990, Trump took an extremely libertarian perspective on the War on Drugs, stating, “You have to legalize drugs to win that war. You have to take the profit away from these drug czars.”

However, he has apparently had a change of heart in recent years. At CPAC earlier this year, in an interview with Sean Hannity, he stated that Colorado’s legalization of marijuana was “bad,” saying that he “feel[s] strongly about that,” and that Colorado has “got a lot of problems going on right now.” He did concede however, that he is in favor of medical marijuana. 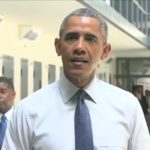