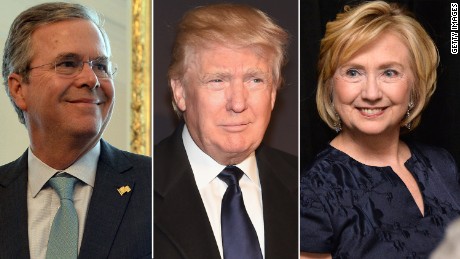 Trump has a long history with Hillary Clinton, donating to her campaigns in 2002, 2005, 2006 and 2007, as well as donating a six-digit sum to the Clinton Foundation. Clinton even attended Trump’s 2005 wedding, and Trump once called her a “fantastic Senator.” He had similar praise for Jeb Bush in 2000, saying “He’s exactly the kind of political leader this country needs now and will very much need in the future. . .He’s bright, tough, and principled. I like the Bush family very much. I believe we could get another president from the Bushes. He may be the one.”

Today, Trump calls Hillary Clinton “the worst Secretary of State in the history of our nation” and says that she would be “a terrible president.” On Jeb Bush, he referred to him as “pathetic” for his support of Common Core, and said that his immigration policy is “baby stuff.” He has also said that in regards to Bush facing Clinton, “Jeb Bush will never take us to the promised land. . .No matter what you do, it’s not going to happen.”