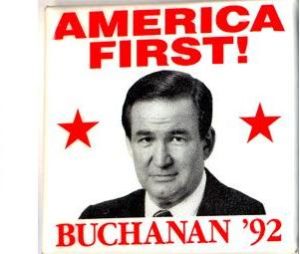 According to a report out of the The Business Standard News (BizStandard), quoting from an his interview with The Conservative Chronicle, former presidential candidate Pat Buchanan, is feeling nostalgic about the 1950’s America where, as he puts it, different races “knew their place.”

“Back in the ‘50s everyone knew their place, whites over here, blacks over here, Mexicans over here and the women were at home raising the kids,” said Buchanan. “Things functioned better when everyone understood where they needed to be.”

(UPDATE: The above quote is from a satire piece, however the following quotes are factual and sourced in their hyperlinks.)

This is not the first time that Buchanan has made controversial remarks, or even the first time he has looked back fondly on times of racial segregation and discord.

In 1983, Buchanan wrote in a column and spoke to his view point of women stating, “Women are simply not endowed by nature with the same measures of single-minded ambition and the will to succeed in the fiercely competitive world of Western capitalism, women deserve an equal chance at the starting line. But, for women, there is an honorable and honored exit from the rat race – home, hearth and family.”

In regards to fondness for racial divide, beyond his latest comments, he has said this on National Public Radio (NPR),

RACHEL MARTIN (HOST): A decade ago, you wrote in your book, State of Emergency, on the issue of immigration, speaking of the world changing and America changing, you wrote that “if we do not get control of our borders, by 2050, Americans of European descent will be a minority in the nation their ancestors created and built.” Do you still stand by that statement? And do you think ideas like that resonate?

PAT BUCHANAN: I would amend it. That period will be reached in 2042, now, or 2041. So we’re about 25 years away from the fact where Americans of European descent will be a minority in the United States.

MARTIN: Why do you see that as a problem?

BUCHANAN: Well, because I look at Europe and I look all over the world, and I see peoples everywhere at each others’ throats over issues of ethnicity and identity. Again, the United States of America — we had an enormous success, we had high immigration from 1890 to 1920. Then we had a timeout where all those folks from eastern and southern Europe were assimilated and Americanized. They learned English. I went to school with the sons and daughters of these folks, and we created a really united country where 97 percent of us spoke English in 1960. Now, in half the homes in California, people speak a language other than English in their own homes. Anybody that believes that a country can be maintained that has no ethnic core to it or no linguistic core to it, I believe is naive in the extreme.

MARTIN: But you understand how that language feels very incendiary to many people?

BUCHANAN: I don’t care how that language sits with people. My job is not to make people happy, it’s to tell the truth as I see it.

MARTIN: Explain to me what having a diverse cultural identity and a diversity of languages, how that undermines the American identity. I think it’s important to try to understand why you think that this is such a threat.

BUCHANAN: Well first, it seems that the American people tend to agree with us, does it not?

MARTIN: But, what you are laying out is an America that is white, or if not exclusively white.

BUCHANAN: Well, first off, the voters, apparently, in the Republican Party, have voted pretty conclusively for Donald Trump. And we’re going to find out in the fall whether he has won it with the nation. Because, I think Hillary Clinton will raise the issue that she disagrees with him sharply on this.

It appears that some of the Republican Presidential nominee Donald Trump’s supporters see the campaign slogan of “Make America Great Again,” as a reference to the sentiments sent forth by Buchanan’s words.

On CBS’s Face The Nation, a Nevada voter and supporter of Trump said that she wanted to the country to return to a past era of “moral values.”

“I think that the laws that Obama has passed, the way the country has — I call it down turning. Some of the other people are proud of it and happy for it. I personally am against it, the homosexuals, the abortions. All the stuff, I am against,” she said.