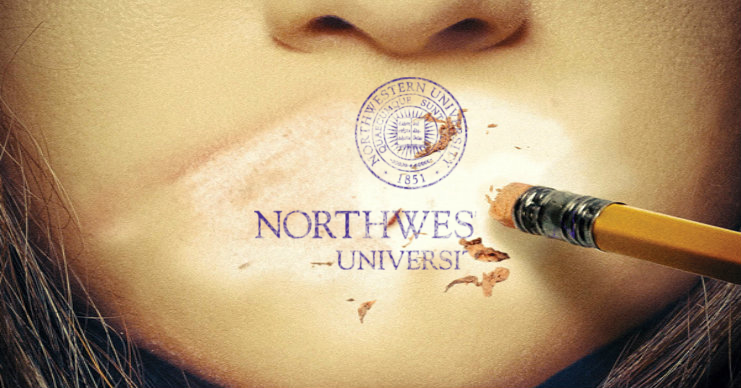 In the Fall of 2016, two major universities in the city of Chicago, known for their intellectual rivalries, released two very different public statements about first amendment rights on campus. The University of Chicago led the discussion by sending a letter home to students stating the university believes strongly in the free exchange of ideas and would not be censoring speech or preventing speakers on campus. Shortly after this letter earned media attention, Northwestern University president Morton Schapiro was quick to respond saying, “The people who decry safe spaces do it from their segregated housing places.” It is worth noting that the author of this piece does not live in segregated housing.

Therefore, it isn’t surprising that Guy Benson’s alma mater currently has policies in place that restrict Northwestern students’ first amendment rights. Though the university claims they are “committed to the ideals of academic freedom and freedom of speech,” if a student wishes to hand out a constitution on campus, they may not have the freedom to do so. Distribution is contingent upon university approval, which begs the question of what criteria materials must meet in order to receive bureaucratic approval and be used to engage in what is supposed to be freedom of speech. To further investigate the purposes behind these restrictive policies, the Northwestern Young Americans for Liberty chapter set out on campus to directly challenge the policy.

On March 3rd, 2017, Northwestern YAL Chapter leaders Alyssa Liu and Maximilian Zoia pushed a large free speech ball across campus filled with unfiltered messages in order to bring attention to the speech codes on campus. In addition to pushing around the ball, the chapter distributed leaflets and hand bills to approaching students without seeking out bureaucratic approval, a direct violation punishable on Northwestern University’s campus. What was the administrative response? Silence. After spending three hours moving around campus, the students did not face any direct resistance from university faculty. However, leading up to the event, the administration engaged in an email exchange in which they attempted to discourage Liu from violating their speech code, becoming silent after Liu directly asked why these speech codes are in place at the university. Below, you will find the email exchange between Liu, a student at Northwestern University, and a Northwestern University administrator. Note the timestamps on each email, as they indicate how quickly the administration was to reply before going silent and failing to show at the chapter’s event. 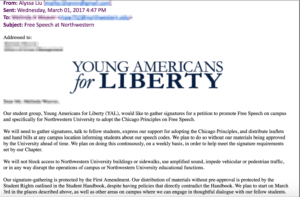 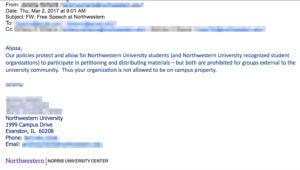 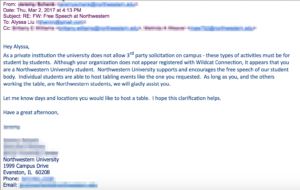 Throughout this exchange, the administrator emphasizes the importance of obtaining university approval before students may assemble and distribute materials on campus. The emails contradict themselves by stating that the university ‘encourages free speech’ but does not allow ‘3rd party solicitation’. However, the YAL chapter did not solicit students. Rather, they pushed a large beach ball around campus, allowing students to write on it if they pleased, while handing out constitutions for students who wished to take them.

Students were not pressured or asked to contribute services or monetary contributions, yet the university claimed this behavior would be occurring and not worthy of first amendment protections. We also notice the administration’s quick ability to cite university policy but they skim over the pointed question asking what action will be taken against students who refuse to obtain university approval. Additionally, the university gave no formal response to the student’s activism while it occurred on campus, even though they were directly informed it would be occurring.

Perhaps the university no longer feels the need to enforce policies that restrict students speech. If so, why does the university continue to keep this policy in writing on campus, and care enough to discourage students at the university from violating them? A more plausible explanation for the lack of university enforcement may be a strategic move taken for this isolated incident in hopes of avoiding media attention being drawn to the college. We hope to highlight the suspicious bureaucratic actions seen in the pictures of this article in order to remind this university that millennials are willing to and will fight for free speech on campus.