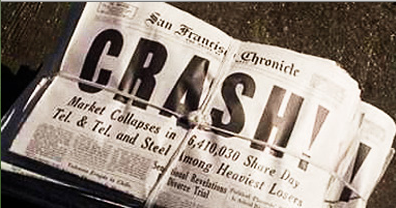 President Obama’s reelection was greeted with a steep selloff in stocks this week. Markets have been bleeding in anticipation of a continuation of the executive branches anti growth policies and threats of more regulations, taxes and barriers to trade. That has been compounded by signals that Speaker John Boehner of the House of Representative may agree to raise taxes to the tune of $800B in the next decade.

In related news stock in Smith & Wesson jumped 9.6 percent to $10.37 at the close in New York. It was the gun makers  biggest gain since Sept. 7.

As if to make matters worse, the election to the Senate in Massachussetts of left wing radical Elizabeth Warren provides another crushing blow to the spirit of free enterprise in America. Warren is the mother of the phrase, “You didn’t build that” that the president paraphrased in one of his brief moments without a teleprompter. Warrens election likely added fuel to the fire onto the Wall Street sell off as whispers of her receiving a highly coveted seat on the Senate Banking Committee were floated around Washington. Warren would have extraordinary power from that bully pulpit to harass banks and other institutions, or even break them up completely.

Although the Presidents reelection has driven markets down, it is an eery bit of nostalgia from his 2008 election when the Dow plunged more than 400 points on the two trading days after his election on November 4 of that year. It’s clear that capital markets do not trust the president and are reacting to a volatile economy mixed with political uncertainty inspired by gridlock and what appears to be a fiscal cliff the United States is heading off of. Steep, automatic spending cuts of $1.2 trillion plus some tax hikes are coming on January 1st if Congress fails to pass a budget before the coming year. Add this to a Federal Reserve that has set interest rates to basically zero and you have a recipe for disaster.

And while prospects for the American economy are bad, European markets are already drowning in seas of red ink. A three year old prolonged debt crisis has created high unemployment that European Union parliamentarians are saying could last for years. Poor economic conditions and cultural marxism has contributed to turbulent pendulum swing of political power in Greece to a hyper-nationalist socialist party “The Golden Dawn”.

Free marketeers in the United States have very few tools at the moment with which to hammer out an agenda for real reform that could provide stability and reassurance to timid markets. Investors and entrepreneurs have little incentive in the current climate to take risks and put resources and effort into an economy that will tax them out of existence if they do. Most chatter amongst the political circles of Washington D.C. following the elections was that it was time to “wait it out another four years” and to “put your head down. Let’s just get through this.” These thoughts were likely echoed by many on Wall Street following the election. Only they probably used more four letter words.

Former President Carter may have been right when speaking about the economy one day he said, “The erosion of our confidence in the future is threatening to destroy the social and the political fabric of America.” He may have been somewhat correct in that it takes confidence to take risks and invest and run a business and perhaps Americans at the time could have made the decision to build rather than save. This is 1979 and we are unlikely to have a miracle such as the one that occurred in 1981.

In 1981 President Ronald Reagan signed the Economic Recovery Act. The legislation acted to amend the IRS code of 1954. It included sweeping across-the-board cuts in the marginal income tax rates. It cut estate taxes and cut corporate taxes by $150 billion over a five year period. If President Obama had come to reelection with that type of message it’s likely the markets would have reacted positively. With politicians such as President Obama and now Senator Elizabeth Warren it seems those days are gone for the foreseeable future.