The dating website for married cheaters, Ashley Madison, was hacked over the weekend by a group that calls themselves The Impact Team.

They temporarily shut down the homepage of the website and ordered the site to be shutdown permanently, or The Impact Team would release all users’ personal account information to the public. 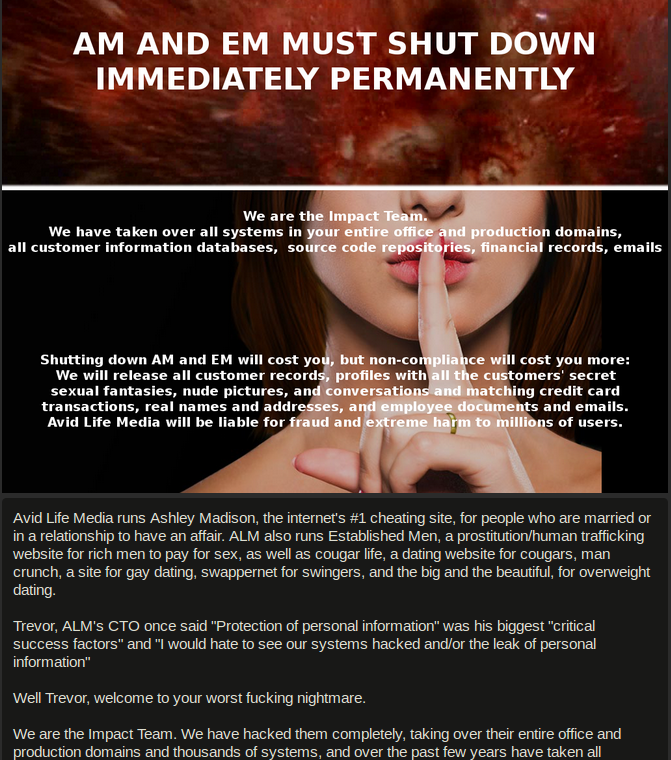 Ashley Madison’s slogan is “Life is Short. Have an Affair.” The website is owned by Avid Life Media (ALM), the Toronto-based firm that also owns related hookup sites like Cougar Life and Established Men.

“Too bad for those men, they’re cheating dirtbags and deserve no such discretion,” the hacker team said. “Too bad for ALM, you promised secrecy but didn’t deliver. We’ve got the complete set of profiles in our DB dumps, and we’ll release them soon if Ashley Madison stays online. And with over 37 million members, mostly from the US and Canada, a significant percentage of the population is about to have a very bad day, including many rich and powerful people.”

I love everything about this. Computers are so fun.

ALM Chief Executive Noel Biderman suggested that the incident may have been the work of someone who at least at one time had legitimate, inside access to the company’s networks.

“We’re on the doorstep of [confirming] who we believe is the culprit, and unfortunately that may have triggered this mass publication,” Biderman said. “I’ve got their profile right in front of me, all their work credentials. It was definitely a person here that was not an employee but certainly had touched our technical services.”

Just two months ago, a similar hack leaked user data of millions of accounts from the hookup site AdultFriendFinder.

The vigilantes in the Ashley Madison hack have apologized to one person, however.

As of now, the site has been returned to its normal function, and no further data breaches or leaks have been discovered.

ALM has released a formal statement in regards to the hack:

We were recently made aware of an attempt by an unauthorized party to gain access to our systems. We immediately launched a thorough investigation utilizing leading forensics experts and other security professionals to determine the origin, nature, and scope of this incident.

We apologize for this unprovoked and criminal intrusion into our customers’ information. The current business world has proven to be one in which no company’s online assets are safe from cyber-vandalism, with Avid Life Media being only the latest among many companies to have been attacked, despite investing in the latest privacy and security technologies.

We have always had the confidentiality of our customers’ information foremost in our minds, and have had stringent security measures in place, including working with leading IT vendors from around the world. As other companies have experienced, these security measures have unfortunately not prevented this attack to our system.

At this time, we have been able to secure our sites, and close the unauthorized access points. We are working with law enforcement agencies, which are investigating this criminal act. Any and all parties responsible for this act of cyber–terrorism will be held responsible.

Avid Life Media has the utmost confidence in its business, and with the support of leading experts in IT security, including Joel Eriksson, CTO, Cycura, we will continue to be a leader in the services we provide. “I have worked with leading companies around the world to secure their businesses. I have no doubt, based on the work I and my company are doing, Avid Life Media will continue to be a strong, secure business.

Dolezal: I’m Not African American, But I AM Black