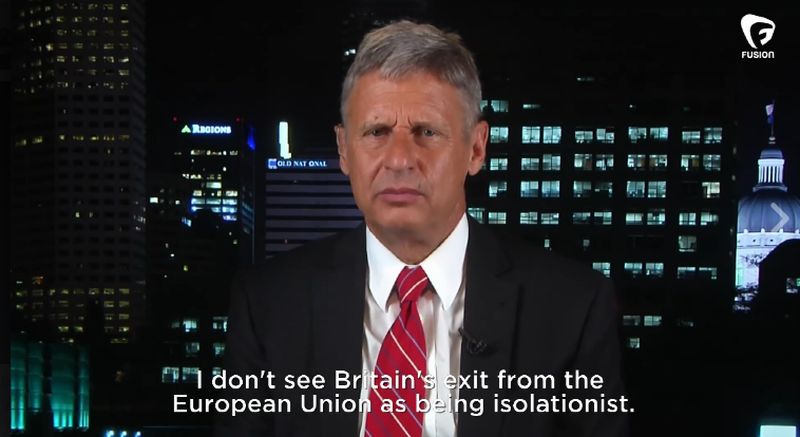 When Britain decisively chose to leave the European Union in the now infamous Brexit, it spurred much analysis on the political motivations of the electorate. A popular theory has been that the Brexit was motivated by anti-immigrant, isolationist attitudes that have become more and more prominent across Europe.

If you ask the Libertarian presidential nominee Gary Johnson, however, you’ll get a slightly different answer. On the show America with Jorge Ramos, Governor Johnson was asked if the same “anti-immigrant sentiment” of Brexit might make its way to the polls on November 8th in the U.S.

“I don’t see Britain’s exit from the European Union as isolationist,” Johnson responded, “I really see it as them staking out their own opportunity.” You can watch the Governor’s defense of Brexit below:

Johnson referred to the E.U. as “a giant bureaucracy” and a “crony capitalist” institution. In his view, Brits removing themselves from the E.U. were more concerned with their economic independence than with immigrants.

There’s no reason to assume that the governor’s analysis doesn’t hold true. On one hand, concerns about immigrants and border control have permeated the Brexit debate. On the other hand, it’s hard to look at the massive bureaucracy of the E.U. and just assume away the implications of such an economic burden. Furthermore, the issue of immigration itself has economic ramifications for a country with already over-burdened national healthcare system.

While it was certainly beneficial for Britain to remain in the Common Market of the E.U., countries are now lining up to create new trade deals with them. They won’t be isolated from the Union either, as conditions of their exit and future dealings with the E.U. will be set before they officially leave.

No one can predict how their deal with the E.U. will turn out in certain terms, but it’s impossible to overstate the benefit of being able to chart your own course. Brits will finally have command over their own finances and national policies.

Ultimately, the nature of the Brexit could indeed have great implications for the 2016 U.S. presidential race if it turns into a worldwide phenomenon. If the Brexit was a result of anti-immigrant sentiments, it would likely bode well for the candidacy of Donald Trump. Trump, in many ways having built his campaign by fighting illegal immigration, already called victory in light of the Brexit outcome.

Many people are equating BREXIT, and what is going on in Great Britain, with what is happening in the U.S. People want their country back!

However, if it does indeed hold true that the spirit of economic empowerment is sweeping the globe, Gary Johnson should be able to capitalize on it. Running a campaign dedicated to letting markets steer the economy back on track, Johnson understands the value of economic sovereignty.

At this point in time, any predictions are pure speculation. This being said, it’s never a bad sign when a country rejects invasive government so they can set their markets free.

Why Libertarians Should Applaud the SCOTUS Ruling Against Texas Abortion Regulations