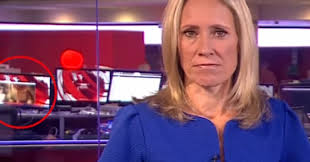 BBC’s “News At Ten” anchor Sophie Raworth began a segment discussing England’s cricket team without realizing that an employee was watching what appeared to be pornography in the background.

Raworth began recapping England’s cricket win over South Africa, with the employee’s computer screen visible over her right shoulder. The woman in the employee’s video stripped to the waist in front of another male actor. Many thought the video was pornography, but several British outlets are now reporting that the scene was likely from a TV show or movie.

An investigation into the gaffe is underway to find out how the salacious material made its way on air during a live broadcast.

Around 3.8 million viewers watched the show, with viewers sounding off on social media and asking why they were treated to a smut film with their daily news.

BBC officials said they are “establishing the facts” while they look for ways to avoid this embarrassing situation in the future.

Jihadist BUSTED After Trying To Crowdsource Attack On US Airbase