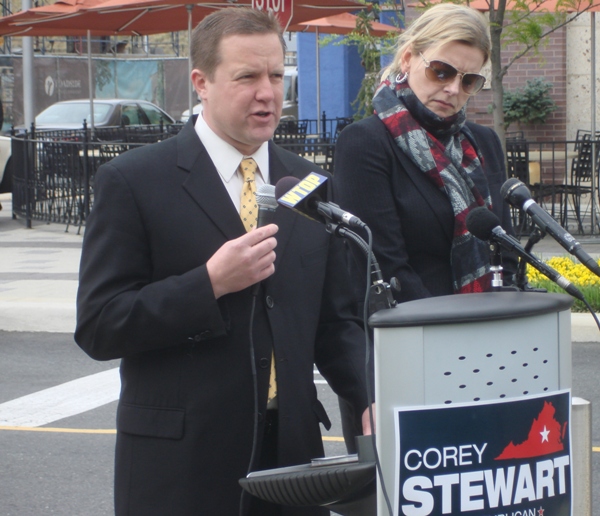 Republican candidate for governor in Virginia Corey Stewart campaigned heavily against the removal of a statue of Robert E. Lee from a park in Charlottesville last week, but he was very supportive of erasing “racist” parts of U.S. history, according to an investigation by The Daily Caller News Foundation.

The Charlottesville City Council opted to move the statue earlier this month, a decision that Stewart quickly opposed.

“I think Wes Bellamy is a particularly heinous individual,” Stewart said, referencing the city council member who initiated the change.

“He’s clearly a racist. He’s clearly a bigot on so many different levels. This person is unfit for office and needs to be removed. He’s an embarrassment not just to Charlottesville, but to the entire commonwealth.”

“There is going to be a lawsuit filed to prevent Wes Bellamy and his group of thugs and tyrants on the Charlottesville City Council from tearing down a statue which was placed in trust to the City of Charlottesville by its citizens.”

Stewart also attended a protest of the statue in Charlottesville, and tweeted his outrage, calling the move a direct attack on Virginia’s “heritage.”

The gubernatorial candidate was on the other side of the issue last year, when he supported changing the name of a school based on the potentially racist past of the namesake.

The school was named after Mills E. Godwin, Jr., who served as governor for two terms during the 1960s and 1970s, and served in the state senate for nearly a decade. Godwin actually switched parties — several times. He changed from Democrat, to Independent, and then to Republican, over the course of his career.

Despite campaigning with President Lyndon B. Johnson in support of the Civil Rights Act, a measure passed by Republicans, he was labeled a “segregationist governor” by civil rights leaders, and local school board member Justin Wilk, who suggested changing the name of the minority-majority school.

Stewart fully supported the change, calling it a “good compromise” with local school leaders, but didn’t want the county to foot the bill for his decision.

“It sounds like the School Board made a good compromise here, and we’re not going to penny pinch if the costs are minimal just to mail out a few voter cards, but the schools are going to incur the cost of the change.”

Due to the fact that it was an election year, the school was saddled with the cost of changing its name on all signage, including clocks, bleachers, athletic equipment, as well as on ballots, maps, and other electoral paperwork sent out to voters in the district. The total cost of the change ended up being $265,700.

Stewart insisted that standing up against removing historical reminders from public life is a akin to courage.

“I want to demonstrate that I’ve got courage and that I’m willing to stand up for Virginia’s heritage,” Stewart said. “I hope that people will respect that and vote for me.”

The campaign for Corey Stewart didn’t immediately return a request for comment.