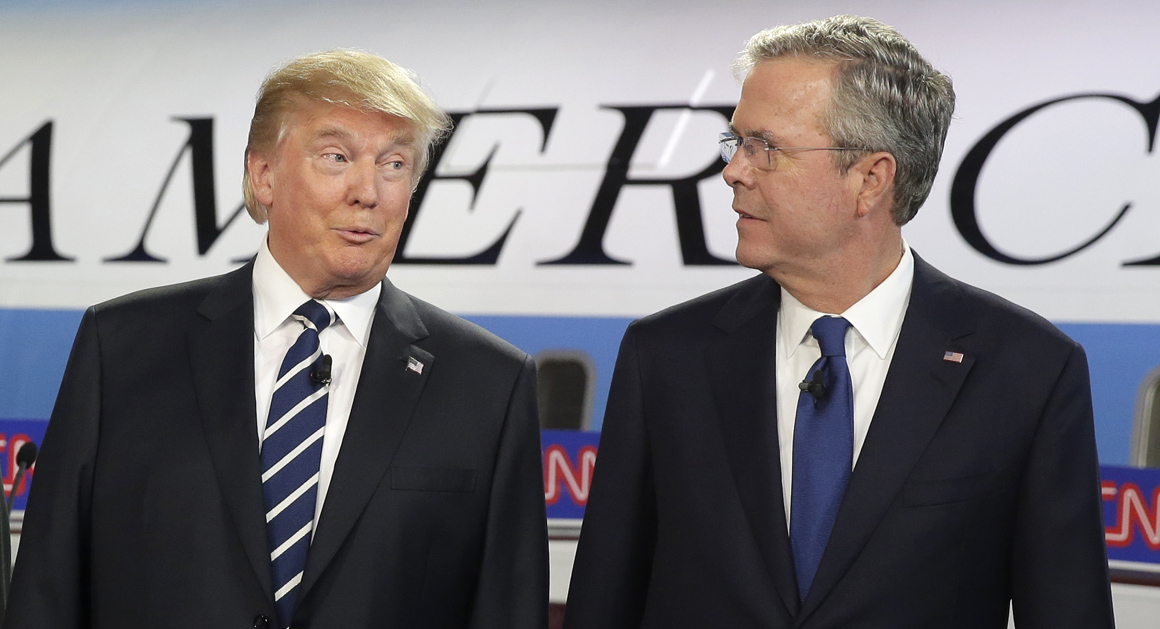 Donald Trump is a liar. While he has undoubtedly shaken up the often dull world of electoral politics, he cannot long hide what he truly is.

Trump portrays himself as an outsider; it’s the entirety of his appeal to the GOP base. But the truth is that Donald Trump is a lifelong politician and someone who has been rubbing elbows with Washington’s liberal elite for his entire career.

“I’ve been in politics my entire life, just on the other side,” Trump confessed at the debate. He doesn’t mean as a voter. Trump has continually bragged about his influence in politics and his ability to buy politicians.

He shrugs off questions about the millions of dollars he has given to Democratic candidates as business as usual. “I get along with everybody,” he explains.

He’s previously bragged about how Hillary Clinton attended his wedding because of the money he had given her. But Trump doesn’t just donate money for personal favors, he does so to get political favors. Such was revealed again during Wednesday night’s debate when Trump got into an argument with former Florida governor Jeb Bush.

When Trump accused Bush of being beholden to big money donors, Bush recalled rebuffing Donald Trump himself. Apparently, according to Bush, Trump contributed money to his campaign for governor and tried to push the Florida GOP into changing its stance on casino gambling. Bush remains adamant that he refused to be bought.

But Trump flat-out denied the allegation, claiming he never wanted casinos in Florida before adding that if he did want them, he would get them. But according to political fact checkers, Trump was lying through his teeth. In fact, his efforts to change Florida law and bring his casinos to the sunshine state is well documented.

“The one guy that had some special interests that I know of that tried to get me to change my views on something—that was generous and gave me money—was Donald Trump,” Bush said. “He wanted casino gambling in Florida.” That’s when Trump cut him off—and failed to tell the truth. “I didn’t,” Trump said. But for more than 21 years, Trump did. He and his company have repeatedly been on record trying to get casino deals in one form or another in Florida. From hiring lobbyists to taking a former business partner to court, Trump’s interest in getting a piece of Florida’s gaming industry has been documented in news articles from Tallahassee to Miami. Trump’s involvement in expanding Florida gaming—an effort that regularly fails in the state Capitol due to the influence of conservative lawmakers—is well-known among state capital reporters, politicians and lobbyists alike. “Donald Trump has tried almost every year to have a casino, even before Jeb was governor,” said Danny Adkins, president of Mardi Gras Casino in Hallandale Beach. “It’s not even a secret.” The gaming industry is so cutthroat in Florida that lobbyists from different companies have almost come to blows protecting their turf and trying to get an edge in Tallahassee. But when Trump said during the debate that he didn’t want gambling, Adkins said the old foes started texting each other in disbelief. “Trust me: everyone is an agreement about this,” Adkins told POLITICO Wednesday night, laughing. “And we don’t really agree on anything else.”

And Jeb’s accounts check out, as well:

Trump’s biggest shot at getting at getting a casino deal was in 1998, when Bush was mounting his first successful campaign for governor and the developer was in talks with the Seminole Tribe of Florida, which wanted Las Vegas-style casinos. But they weren’t legal at the time, and then-Democratic Gov. Lawton Chiles was opposed to expanding gambling. Meanwhile, Bush’s close ally, incoming Florida House Speaker John Thrasher, was courting Trump and met with the developer and twice discussed his arrangement with the Seminoles, according to news reports at the time. And on May 7, 1998, Trump Hotels & Casino Resorts cut its largest check to the Republican Party of Florida: $50,000. Bush’s opponent, Lt. Gov. Buddy MacKay, charged that Bush and the GOP were selling the state out to gaming interests… Bush has remained consistently anti-gambling. And by late fall of that year, it was clear he was going to win. And he made clear that he wasn’t going to approve a gambling deal. Around this time, Trump appeared to pull out of his deal with the Seminoles. Trump’s on-again-off-again consultant, Roger Stone, told POLITICO on Wednesday night that Trump technically withdrew from his deal with the Seminoles before Bush became governor. But Trump’s withdrawal corresponded with Bush’s likely victory and his intransigence over gambling expansion.

Trump wanted casinos in Florida and contributed heavily to Jeb Bush and his fellow Republicans when he felt the time was opportune. When Jeb would not change his stance and appeared poised to win, Trump pulled out of the deal he was brokering with the Seminoles.

Flash forward to Wednesday’s debate. Trump not only lied without blinking, every bit of his posture was fraudulent. He scoffed and rolled his eyes and carried on like a child, but the entire time he was lying. Multiple fact-checks have now proven this to be so. What does that say about Trump?

It says he is a liar, first and foremost. But it also betrays the reality of the man. Trump likes to bash the other candidates for having to rely on campaign donations; he maintains this makes them beholden to their donors. But Trump has more experience at backroom political deals than any of them. He has been involved in politics longer than most of them have. He is no outsider, he is the big money pulling strings of whatever politicians he can buy.

How many times has he bragged that politicians do what he wants them to? This is the man people consider an outsider? The reality is people like Trump are part of the problem.

This incident also portrays that Trump does not always win, as he asserts. This was one glaring example where he clearly lost. He also lost the debate, though he was willing to lie through his teeth in order to win. He has taken four companies into bankruptcy. Despite what he may tell you, Trump is very versed in losing. Need I dare say, if the GOP actually nominates him, he will lose again.

Look What Schools Are Teaching Kids About Who Creates Jobs