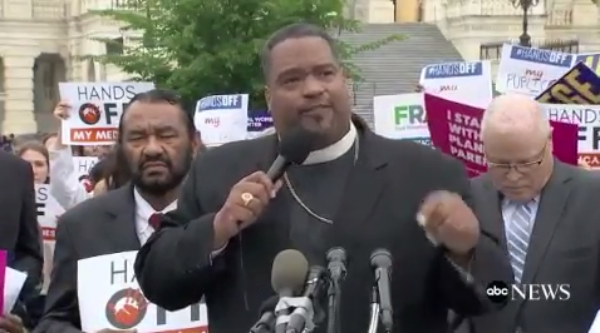 A Philadelphia bishop is accusing the President Donald Trump of attempting to implement “ethnic cleansing” through proposed budget cuts designed to shrink the federal government, reports the American Mirror.

“This budget, if I can be honest with you, is an attempt to implement ethnic cleansing in this nation from people of color, but also poor white folk from whom services being but will be impacted the most,” Bishop Dwayne Royster said at a Wednesday social justice rally broadcast by ABC News.

“President Trump and his surrogates have used dog whistle language to speak about race in negative ways and create fear in the hearts of Americans.”

“In an attempt to hurt families of color, the president has hurt white folks, as well. These cuts will take away jobs in needed industries like healthcare, put people out of work and increase poverty in this nation.”

Royster, who according to the American Mirror, heads Philadelphia’s Living Water United Church of Christ, appeared to use his rhetoric to incite the idea that Trump’s main goal, through his budget, was to redistribute wealth to the rich.

In fact, Royster went as far as to claim that the President’s plan would literally see people drop dead.

The bishop is currently the political director for PICO – People Improving Communities through Organizing – which advocates liberal policies on healthcare, immigration, and social justice issues, explained the American Mirror.