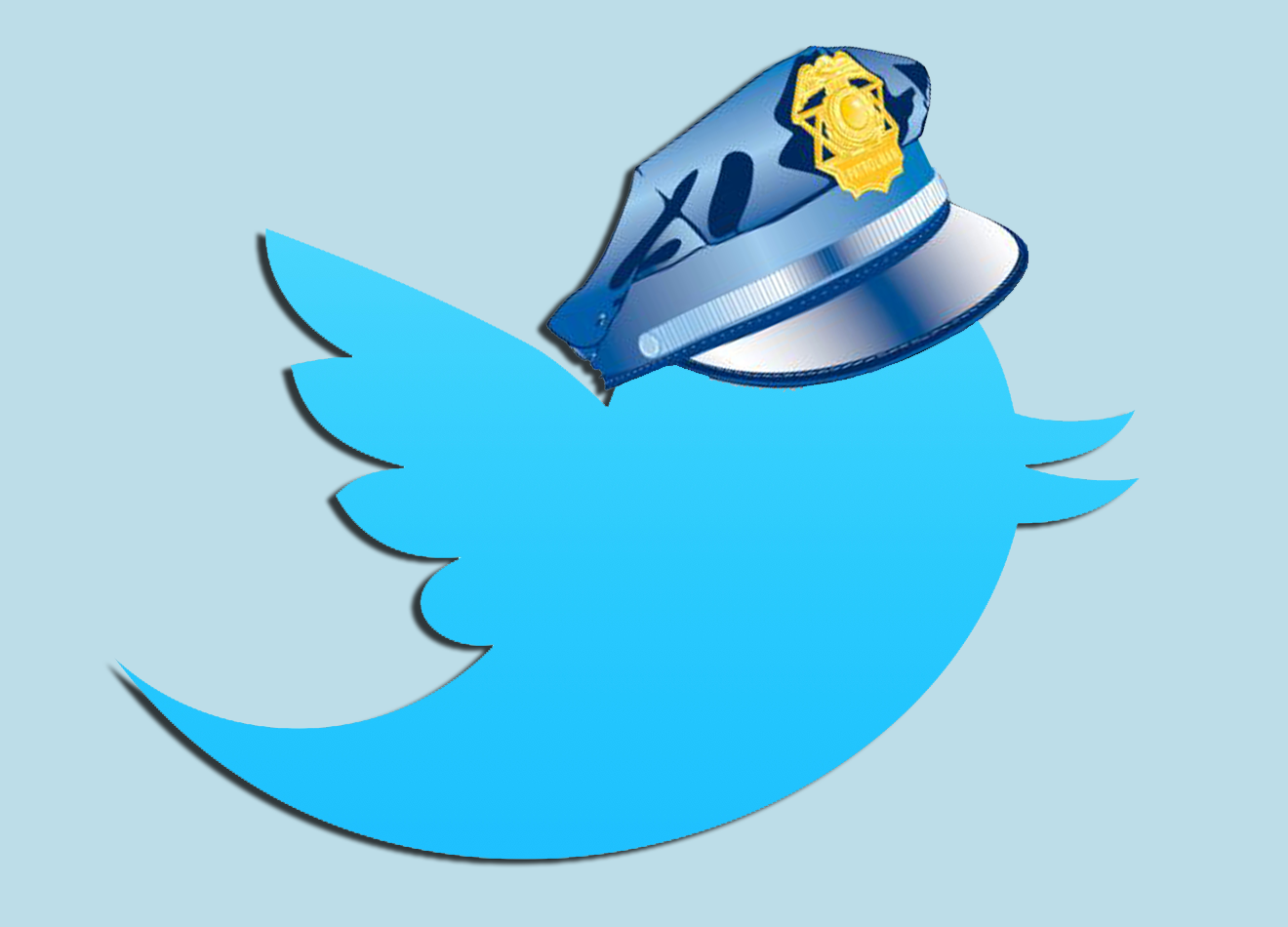 The Topeka, KS Police Department has found themselves embroiled in a Twitter backlash following a distasteful Father’s Day tweet.

The police department has since deleted the tweet, shown below in a screenshot. 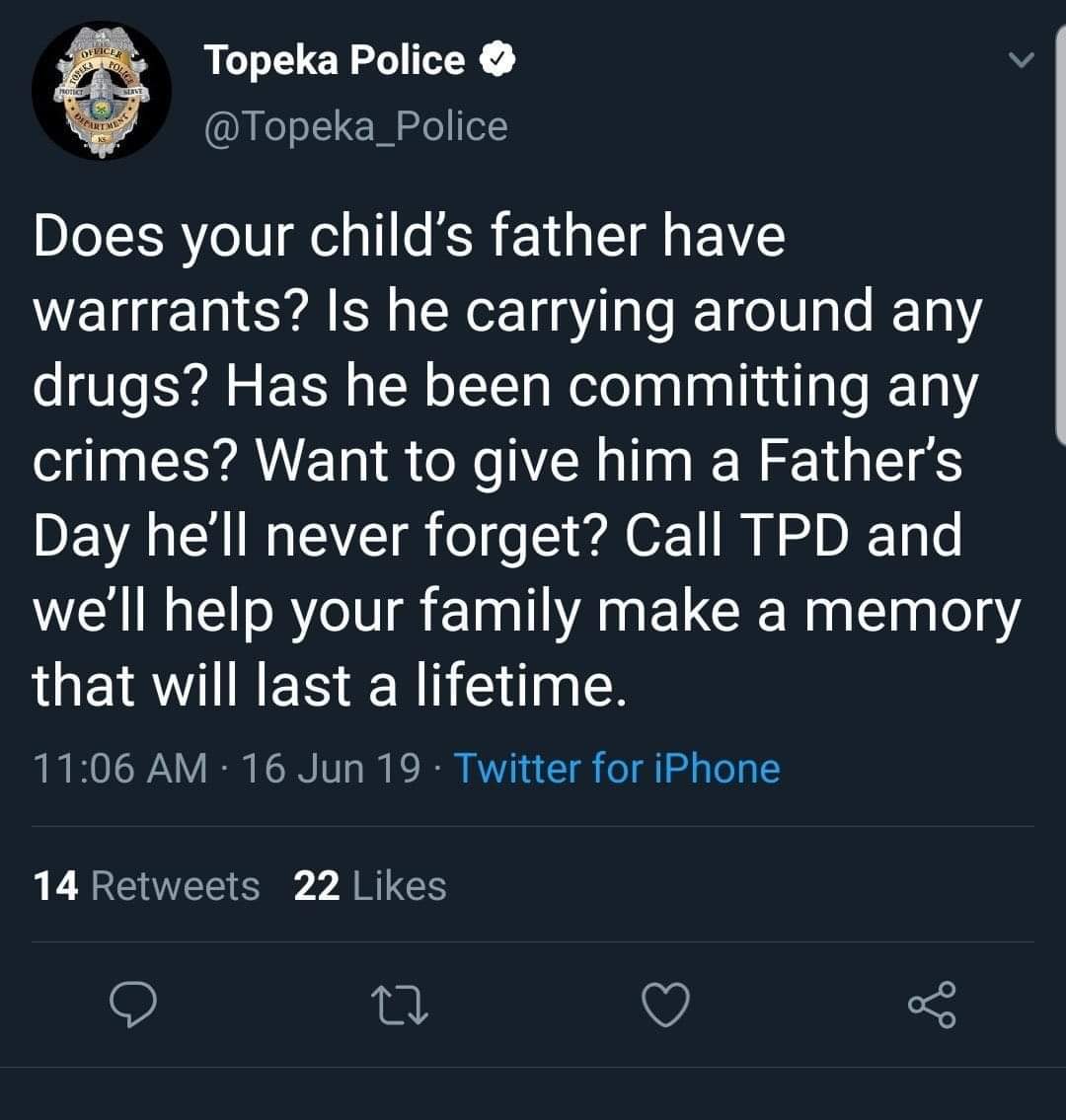 People were upset by the tweet due to the “Deadbeat Dad” theme it espoused. They seemingly perpetuated the largely false stereotype that parents only get divorced because the dad walks out on the family, and owes back payments on child support. They encouraged mothers to report their “baby daddies” to the police who had warrants, unpaid parking tickets, or who may engage in buying or selling drugs.

The police department issued an apology after the tweet was deleted following backlash.

The text of the apology reads:

“Yesterday a member of our social media team tweeted on the official TPD Twitter account. The tweet was meant to be humorous and light-hearted, but was hurtful to some. After realizing this, the tweet was quickly deleted. This will be a learning experience and goes to show that words, even when intended to be humorous, can be hurtful to others. Thank you to all who reached out, letting us know how you felt.”

I’m a married father of three. I have no warrants, do not buy, sell or use drugs, and have no outstanding tickets (aside from the red light traffic camera violation, but that isn’t due until later in July). This tweet clearly was not aimed at my expense. I still did not find it very funny.

The reason why “Deadbeat Dad” is a term you hear, is because Family Courts have a long history of awarding custody to mothers, save for circumstances of clear child endangerment. You don’t hear the term “Deadbeat Mom” because it is insanely rare for a mother to be paying child support to a father to begin with.

A number of parents who get divorced have created their own parenting custody plan, and more power to those folks who can work together for their children’s sake. As far as Family Court Custody goes, Physical Custody or Sole Custody is generally granted to the mother.

If a father has fought for custody in Family Court, he clearly wants to be a part of his children’s lives. Sometimes not being in their lives isn’t his choice. Good men have committed suicide over this. It’s hardly humorous to broadly paint these people as criminals and joke about locking them up.

Read the responses from some other Twitter users below.

I think you meant it exactly the way it was received.

Of course nothing like that was posted on Mother’s Day. Mothers don’t participate in criminal acts 🙄#dadsmatter

I'm glad you all deleted it and apologized. Father's take hard enough of a hit, these days anyway.

I grew up on Topeka. Spent 40 years there before moving. I can verify that this post by TPD was on brand. They have no sense of humor.

We're sorry.
We won't make jokes about offering to come to your house and kill you if you have unpaid parking tickets and then say it was because you made us fear for our lives.
This will be a learning experience for us, yay!

Apologies accepted, I hope though that your staff and officers are aware of the pain and suffering of Dad's who are forcefully alienated from their children. No Fathersday for them. They line between being a happy parent and no parent is very thin, it can also happen to you.

Well, there goes your chances at Harvard.

Probably worth figuring out who on your team it wasn’t hurtful to and making sure they don’t touch the public accounts. The ones that interact with the community to whom it is actually hurtful to.

Is it just as lighthearted and humorous when someone jokes about leaving cops kids without their parents?

There was no humor in that tweet, it was self serving and perpetuated a cruel stereotype.

That was not intended to be humorous. This is a non apology. You need to apologize to all the fathers out there who deserve respect.

President Trump: “The Swamp Is Fighting Back”

Remember the Good that Social Media has Achieved