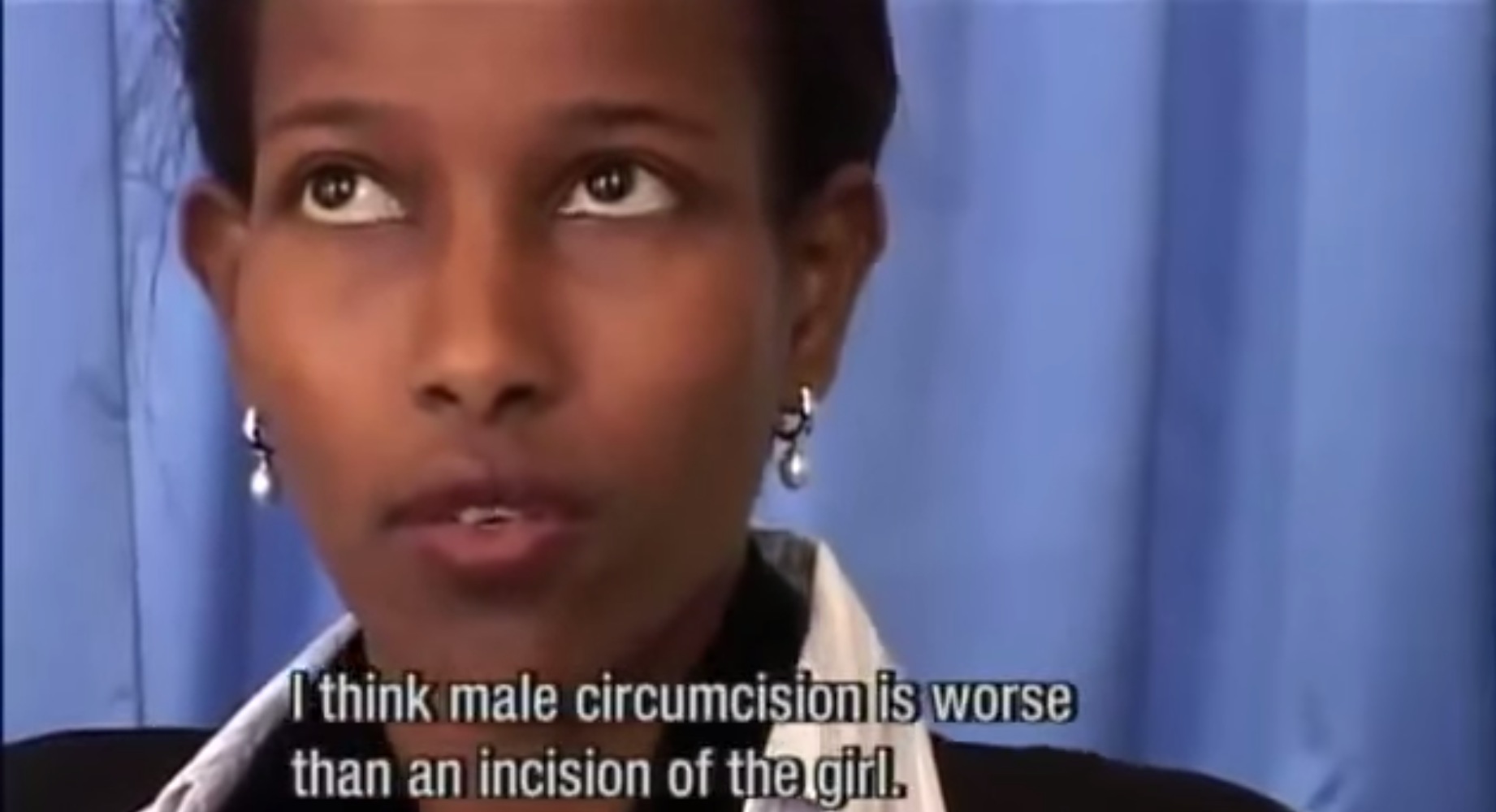 Yesterday’s discussion about genital integrity on list of “20 Stupid Feminist Questions Answered” sparked a heated debate over the issue of circumcision and genital integrity. Commenters were angry and upset that female genital mutilation was being compared to the practice of male circumcision.

Of course, the comparison was not that the practices were the same, they aren’t due to differing sexual organs. The comparison was made that at least in the United States that girls have a right to genital integrity, while boys do not. Even if the procedures are different, and even if there were health benefits to males, that is the absolutely truth.

In that discussion, someone shared a clip of female rights activist Ayaan Hirsi Ali, who argued in an interview that circumcision can be worse than FGM. Her reasonings are below.

Hirsi makes an excellent point, and of course it does make more sense considering the health practices of the third world. But it also raises many important points that I’d like to discuss here below, and explain my reasonings for why I am against cutting the genitals of infant boys.

The main reason for cutting little boy’s penises given is that it reduces the instance of the transmission of STDs such as HIV. That may be true, and certainly the CDC and other secular medical institutions have made similar claims. However, the problem with this reasoning is that a more effective way of preventing the transmission of disease is the use of condoms, and condoms don’t require you to be circumcised. In fact, even if you are circumcised, you STILL must use protection to avoid the spread of disease.

Another problem with the health benefits argument is that if the genders were reversed, there still would not be anyone advocating for it. If performing a clitorectomy were found to reduce instances of HIV, people would still be against it, no matter the health benefits. Why? Because people believe that women have a right to sexual pleasure derived from the clitoris. Does having an intact foreskin increase the amount of pleasure felt by boys? Yes, it does. Does removing it remove some of their sexual pleasure? Yes, it does.

Another argument in favor of circumcision that is often put forward is that it is cleaner. Of course, this is ridiculous on its face. Removing your ears would make it easier to clean. There are all manner of things that could be removed from the body at birth to increase hygiene. And of course, we live in a country with plenty of access to the materials we need to keep ourselves clean. Has anyone ever conducted a study on how much smegma is produced by vaginas with large labias? If removing the labia helped keep vaginas clean, would anyone argue in favor of it? Of course not.

And finally, another argument in favor of circumcision is that it is more visually appealing. Of course, this is an aesthetic choice. Would women be offended if men supported removing labias because vaginas without them are more visually appealing? Of course they would. Isn’t it interesting that feminist abortion activists campaign against men legislating what they can do with their reproductive organs, but that same right doesn’t extend to male genital integrity? Why do women get to say they prefer a circumcised man with no social repercussions? Certainly if men commonly demanded their women and girls remove their genital flaps because they found them disgusting there would be an uproar.

These are a few of the many arguments against circumcision of boys. Personally I believe it should be an individual’s choice. Circumcision shouldn’t be outlawed, simply extended to a period in life when one may decide for themselves whether or not to mutilate themselves. It should be an individual decision. Not a parental one. Why? Because parents don’t own their children, and neither does the state.

Children are individuals who own themselves.

Feminists Called Down The Thunder, And Now They’ve Got It #stupidfeministquestions [PODCAST]