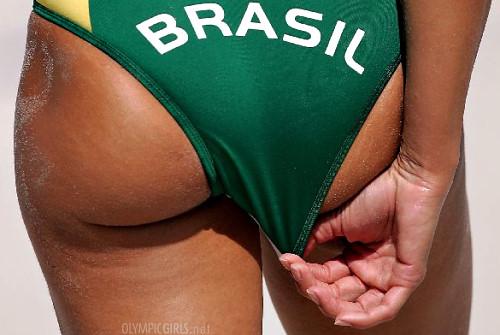 After spiking their whiskey with a substance to knock them out, the women were then able to take the warden’s keys, unlock all the prison’s cells, and allow 28 prisoners to walk right out the main door with guns and ammunition stolen from the prison caches. According to police chief Angelina de Andrades Ferreira, the stash included three 12-calibre rifles, shotguns, two 38-calibre revolvers and ammunition.

Later that morning, police discovered a bag of lingerie and sexy leather police uniforms left by the temptresses. Also discovered that morning, were the officers – naked, handcuffed and with a blurry recollection of what had happened. One officer was found dizzy trying to wake up and “another slept the entire afternoon and could not even be questioned”, said Ferreira.

Ms. Ferreira believes that escape was orchestrated by one of the 28 escapees, Bruno Amorim, a boyfriend of one of the women who had been serving time for attempted murder, robbery and firearms possession.

As of Sunday, after a massive manhunt launched by police, 11 of the prisoners have been recaptured. It appears that efforts to locate the fugitives were not all too challenging. One inmate was found intoxicated, wandering around the center of Nova Mutum waiving one of the stolen rifles while another was caught after steeling a pick-up truck from a farm and crashing it.

Three prison officers have been arrested and will be charged with ‘facilitating a jailbreak’ and ‘culpable embezzlement’ due of the theft of firearms. The director of the prison is also being held, who according to a spokesperson, was not involved in the escape, but was asleep on the premises when the jail break occurred.

“Nothing like this has ever happened,” Fidelis said. “Nova Mutum is a small city. People haven’t talked about anything else since it happened.”

“I think male circumcision is worse than an incision of the girl.” -Ayaan Hirsi Ali

In New Jersey, The Nanny State Will Now Fine You For Texting And Walking