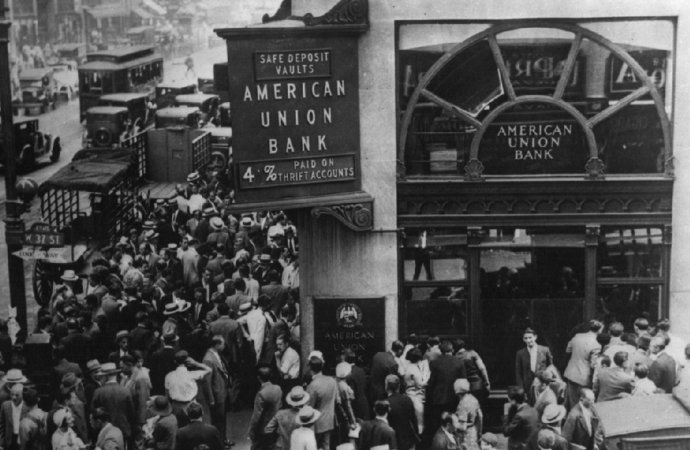 Ninety years ago this very month—August 1929—most stock investors thought they’d never had it so good. By November, they thought they’d never had it so bad. They were pretty much right on both occasions, though things would get a lot worse before they got better. Amid today’s gyrating stock market and increasing talk of recession, let’s refresh ourselves on the momentous events of nine decades past.

What Caused the Crash?

Sparked by tax cuts from the Harding and Coolidge administrations (a good thing) and the Fed’s low-interest rates/easy money policy (a bad thing), the curtain was about to come down on the Roaring ‘20s by August 1929. The Fed reversed itself months before and had been jacking up rates. The smartest investors were beginning to bail, sensing that a 180-degree shift in monetary policy might be the same as pricking an overblown balloon.

The Dow Jones Industrial Average reached a high of 381.17 on September 3, 1929. It bounced up and down for the next six weeks but generally drifted lower. In what Time magazine’s Jennifer Latson labeled “The Worst Stock Tip in History,” famed economist Irving Fisher pronounced that “Stock prices have reached what looks like a permanently high plateau.”

Then to Fisher’s chagrin, the last week of October brought “Black Thursday” and one massive sell-off after another, as ordinary investors joined the plunge. The Dow cratered at a mere 41 in July 1932, representing about 11 percent of the market value of less than three years before. The 1929 high would not be surpassed for a quarter-century.

For an accessible overview of all that, and more, see my essay, “Great Myths of the Great Depression,” available in multiple formats. Caution: It’s not pretty, and some parts of the story will absolutely shock you. But the lessons to be learned are legion.

In advance of many 90th anniversary dates related to the Great Depression, I urge readers to get reacquainted with the politics and economics of that terrible episode in American history. Aside from my essay cited above, the pages of FEE have featured many superb analyses over the years.

The award for “most prolific” among our authors on this subject goes to historians Robert Higgs and Burton W. Folsom. Here’s a selection from Higgs:

“Regime Uncertainty Then and Now”

“The Mythology of Roosevelt and the New Deal”

“The New Deal and State and Local Governments”

“The Myth of U.S. Prosperity During World War II”

“The Great Escape From the Great Depression”

Burton Folsom’s book, New Deal or Raw Deal is a classic but don’t overlook these essays he wrote for FEE:

“The First Government Bailouts: The Story of the RFC”

“The Origin of American Farm Subsidies”

“The NRA: How Price-Fixing Perpetuated the Great Depression”

“FDR’s Folly: How Roosevelt and His New Deal Prolonged the Great Depression” (with Jim Powell)

“Myths of the New Deal”

“Franklin Roosevelt and the Greatest Economic Myth of the Twentieth Century”

Ninety years after it began, myths and misconceptions about our most calamitous economic episode abound. Fortunately, recent scholarship is slowly changing that. The simplistic, error-filled assumption that free markets failed and government rescued us—once conventional “wisdom”—no longer gets by unquestioned.

FEE has proudly been a very important engine of that enlightenment.

Lawrence W. Reed is President Emeritus, Humphreys Family Senior Fellow, and Ron Manners Ambassador for Global Liberty at the Foundation for Economic Education. He is also author of Real Heroes: Incredible True Stories of Courage, Character, and Conviction and Excuse Me, Professor: Challenging the Myths of Progressivism. Follow on Twitter and Like on Facebook.