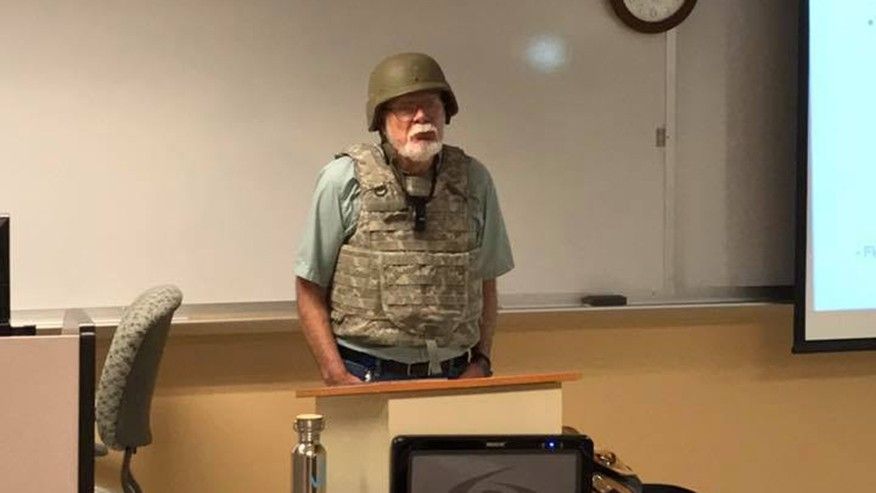 “It definitely makes me feel uneasy that there are more firearms on campus than there really should be,” Professor Smith told mySA.com. “(Dressing this way) was just a statement on how I felt.”

The political fashion statement was not aimed at the college, but the law itself. Smith did not fault his institution, explaining, “they are following the law.”

The professor was greeted with mixed reactions while running his plans by police and administrators beforehand.

The message he was attempting to convey was heard loud and clear. The photo of Smith in combat gear was originally posted on Facebook by a student. The image quickly spread, with comments of support and disapproval alike being hurled at the instructor.

The professor has been with San Antonio College for 10 years and notes that he’s never encountered a gun on campus, despite the occasional fist fight, argument, or threat.

“I realize students were carrying guns on campus illegally, but now it’s legal to do so. It increases the chances of something happening,” Smith said. “Used to, when they got mad at me, they had to go home to get the gun and had time to cool off, now they will have it with them.”

The instructor is not only concerned with his safety, but the safety of others as well.

“My assumption is that you will have more people carrying guns, that will lead to problems. It always has,” Smith said. “There is nothing on this planet worth a human life.”

Despite Prof. Smith’s apprehension, there has not been a gun-related incident at San Antonio College since the implementation of the campus carry policy. Smith’s combat gear certainly brought attention to the issue, but it seems there has been little change affected by his outfit.