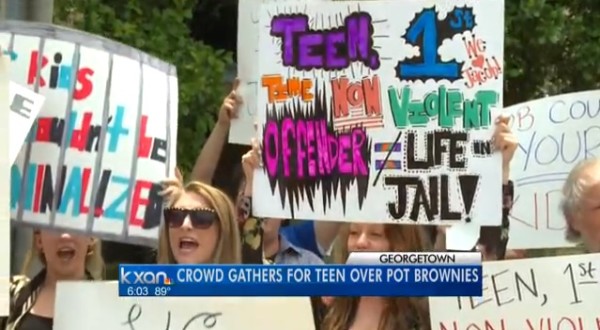 The Libertarian Republic has been closely following the case of Jacob Lavoro, 19, since it first became public knowledge last May. Lavoro had a clean record before he was arrested for making brownies with hash oil and then selling them. The state used the sugar, cocoa, butter and other ingredients to determine the weight of the drugs, leaving Lavoro with a first degree felony.

The teen recently turned down a plea deal that would have demoted his charge to a second degree felony. His lawyer, Jack Holmes, is working to get it down to a misdemeanor, or go to trial. Lavoro took the time to chat with The Libertarian Republic about his current situation.

How are you and your family coping with your current situation?

It’s been pretty tough. I mean we’re all really stressed out about it. Being stressed doesn’t really help the situation. It just gets us aggravated with each other. It’s a tough situation so my parents are really sad, and I’m really sad so I’m trying my best to cope

What has been the most difficult aspect of the ordeal you’ve found yourself in?

The media. My face is all over the place. That makes it hard to get a job.

Your Justice for Jacob Facebook page shows a lot of people are standing with you and are tired of the senseless drug war. Have any prominent groups joined your cause?

Yes, I’ve had the Libertarian Party,, Texas NORML (National Organization for the reform of marijuana laws) and the Fully Informed Jury Association supporting me.

How many rallies have been held for you so far?

We’ve had one really successful rally and we’ve had a couple of other fundraisers. I was given a court appointed lawyer with no trial experience. I feel that was intentional so we’re trying to raise money for my legal defense. I give my lawyer money as I raise it.

How long were you incarcerated when you were first arrested?

For 26 days. It was pretty scary. I was in there with some pretty rough criminals actually. I was locked up with murderers, rapists, the worst of the worst.

Do you feel the money being spent by the state to prosecute you is justified?

No, becuase it’s my first time ever being in trouble. I think the money could be better spent on violent crimes and not nonviolent crimes.

The hashtag #JusticeForJacob has been joining people together on social media. What is it like knowing people around the world are outraged by your injustice?

The support factor is incredible. We’ve had messages from New Zealand, Israel, Argentina…just a whole bunch of messages from people all over the country and all over the world. It’s wonderful and it’s helping me cope a little bit better.

D.C. cop confesses to prostituting underage girls from his apartment