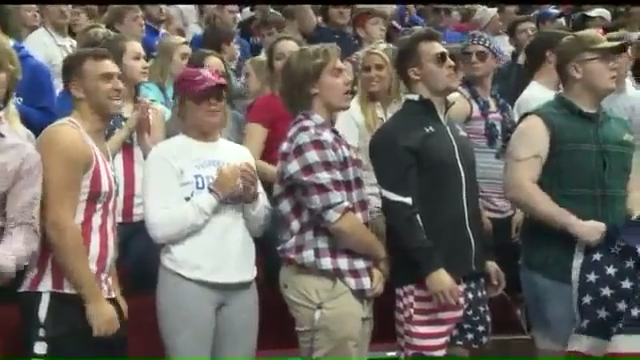 Supporters of the Des Moines North High School basketball team, many of whose players are from refugee families, were offended when fans of Valley High School’s basketball team wore red, white and blue last week, The College Fix reports.

“This is an example of BLATANT racism,” said Ty Leggett, a Valley High School alum, on the Valley High School – WDMCS Facebook page. “ALL participating should have been pulled and banned from ALL VHS extracurricular events for the remainder of the year! As a parent, I’d be mortified that my son or daughter thought this way, acted in this fashion and refrained from taking a stand against this 21st century inexcusable behavior!”

Erin Ness Carter, a mother living in the Iowan district, remarked that “for the supporters of one team from a primarily white part of town to paint themselves as the ‘team of the USA’ it strongly implies that the other team, the less white team, is less American.”

“This country is the United States of America and our country colors are red, white, and blue no matter what color of skin you have or what race you are,” said Mallorie Paige Sander, a current Valley High student. “The intentions to offend anyone by wearing USA themed clothing was no where in the thoughts of any of our student body, why would it be? We all live in America.”

“Any normal person, any educated person can look at that and think what the hell are these kids thinking,” said Morgan Wheat, assistant coach of the Des Moines North basketball team, according to WHO-TV.com. “Kids are kids, I get it, but I do have questions. I want to know why.”

“I don’t want to judge those young people not knowing their motives,” said Ryan. “What I will say is we’re proud of our diversity at North High School — not only on our basketball team, but our population.”

“It’s been good for us, as a school. They learn from each other about people with different cultures and backgrounds — and we try to use it as an educational piece.”

One Valley High School student, Dayna Dunnwald, noted that the school’s students had dressed with a USA-theme instead of their black and orange school colors “many times in the past.”

“A lot of people were very upset about it,” explained DeNasja Spencer, a sophomore at Des Moines North, to KCCI. “Even if that was their theme for the game, I feel like they should have switched that because everyone knows North is a more diverse school.”

“We are deeply sorry if we have offended anyone in any way,” reads the statement, in part. “We have traditionally dressed in such a fashion for great games such as the one last night. Everyone here at Valley has immense respect not only for your team and players but for your community as a whole. Please know that our intent was in no way to offend or demean—just to support our own team in a way we have done before.”

Some Facebook users commented on Valley High School – WDMCS, noting that they had heard the chant “deport him” or “deport them,” but others denied these claims. Valley High responded to the accusations, stating that “administrators and teachers did not hear nor have evidence during the game of this occurring. If we had been aware of it, we would have taken immediate action to stop it. Now having received reports, we are investigating and disciplinary action will be taken for evidence found.”