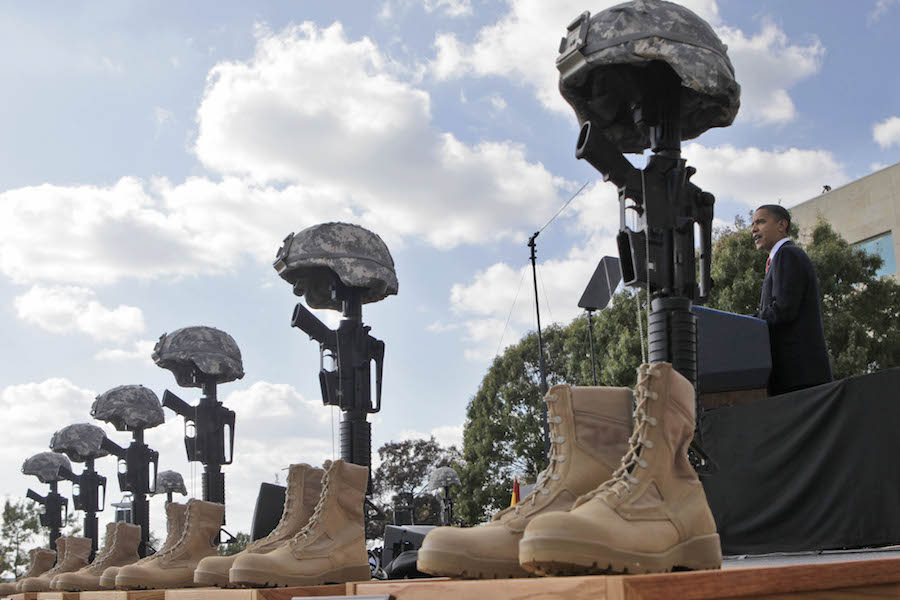 by: The Council for Good Governance

For about two decades now, soldiers, who are called to deploy to foreign lands and use firearms against an armed enemy, have been disarmed at the gates of Army bases.  The entire base of Fort Hood is a heavily enforced ‘Gun Free Zone’.

The only people allowed to carry on duty (save for drawing weapons for a range) are Military Police, CID, and a handful of other entities, such as a few federal law enforcement officers.  On posts such as Fort Hood, which are the size of small cities, the ratio of armed soldiers to unarmed soldiers is far less than the ratio of armed civilians to unarmed civilians in the neighboring city of Killeen.

In the entire span of time, soldiers remained disarmed.  Trained and able to deploy to war zones with ambiguous enemies, highly restrictive Rules of Engagement, and persistent Green on Blue attacks, these Americans were left vulnerable to the exact same mechanism of attack, four and a half years later, here at home.  This is a clear and tragic betrayal of trust.

While the Army has spent an inordinate amount of time and resources over this same period on boondoggles such as the ongoing camouflage fiasco, nothing has been done to craft policy that would allow soldiers to respond to Active Shooter threats.

Politicians have asked troops to do more with less, cut resources in a time of war, burdened the Defense Department with the bulk of sequestration cuts, and used veteran benefits as political bargaining chips. Meanwhile nothing has been done in the Houses of Congress to design a framework which would allow law-abiding soldiers to respond to these threats in their own communities.

Ironically, in the face of both Green on Blue attacks, and Blue on Blue sexual assaults, downrange, the Army defaulted to a proven common sense solution – everyone was mandated to be armed with at least one magazine either inserted or at the ready.

Of course, no one was shocked when military spokespeople turned to PTSD as a scapegoat, citing this recent murderer’s 2011 deployment to Iraq, a deployment that did not consist of combat operations for conventional troops.  To start, PTSD is not an excuse for violence, nor does PTSD or TBI cause violence.

Violence is an innate part of the human condition.  It is the very reason the Army exists.

When soldiers are being trodden upon so blatantly, when we are still at war but call for a garrison environment, when we focus on sideburns and tattoos instead of actual soldier professionalism, when we deny and delay treatment for service related injuries, when we cut compensation packages that were already agreed upon, when we have an open problem with toxic leadership, should we be surprised to learn that many troops consider the military brass and bureaucracy to be nearly as stress inducing as the enemies they faced overseas?

Being an enlisted soldier is the most stressful job in the nation. Is it any wonder that soldiers and veterans occasionally break down? Crazed gunmen are not stopped by gun free zones.  We know this downrange, but we forget it here.

The time for disarmament is over.  The time for reasoned approaches to empowering the lowest level to protect their brothers and sisters to the right and left is past due.

Commander recommendations, screenings, a challenging military CCW licensing, regular evaluations and validations, independent of rank or MOS, are simple approaches that can be used to create a sensible and proven way to minimize the lethality of Active Shooters on military bases.  If we, as an Army, as a military, as a nation, don’t act quickly to put these structures in place, we are not only failing those under our command, we are directly liable for their deaths.

The Council for Good Governance
https://www.facebook.com/TheCouncilForGoodGovernance/info

Surging numbers of children crossing the US Mexico border

Is Being A Vegetarian Bad For Your Health? (PODCAST)