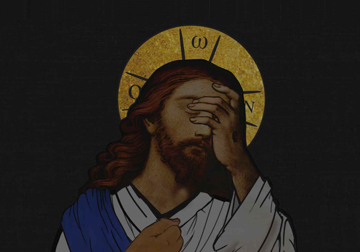 Leftist Activist Shaun King called for the removal of all statues and murals of Jesus, calling them a form of “racist propaganda” in a tweet that has now garnered national attention.

“Yes. All murals and stained glass windows of white Jesus, and his European mother, and their white friends should also come down. They are a gross form white supremacy. Created as tools of oppression. Racist propaganda. They should all come down,” King tweeted Monday.

All murals and stained glass windows of white Jesus, and his European mother, and their white friends should also come down.

They are a gross form white supremacy.

They should all come down.

What Shaun may see as a call to arms to make right the so-called ills of white supremacy, I see for what it is—an attempt to erase monuments honoring the most influential man in the history of the world.

No human being currently living on the earth knows for sure what Jesus Christ looked like; however, it doesn’t take a rocket scientist to figure out that the historical Jesus was not a white man. The idea that all the paintings, statues, and other artistic representations of Jesus are symbols of white supremacy is a far stretch. As outlined in “The Man Who Painted Jesus”, “artists have long painted Christ in their own image.“ Visual images of Jesus painted by Europeans reflected those who painted him. Only on rare occasions, such as when Jesus was portrayed as a red-headed youth, did historians object. From the time of the ancient Romans, Christians have always “contextualized” Jesus in their own image.”

Genesis 1:26-27 makes it clear that God created man in His image as it says:

26 God said, Let Us [Father, Son, and Holy Spirit] make mankind in Our image, after Our likeness, and let them have complete authority over the fish of the sea, the birds of the air, the [tame] beasts, and over all of the earth, and over everything that creeps upon the earth.

27 So God created man in His own image, in the image and likeness of God He created him; male and female He created them. (AMPC)

The idea that any proper Christian could actually be a racist is at odds with the words of the Apostle Paul, who made it clear that Christ does not show favoritism when it comes to loving His children. As he wrote in Galatians 3:28, There is [now no distinction] neither Jew nor Greek, there is neither slave nor free, there is not male [a]and female; for you are all one in Christ Jesus.”

We can also see in Christ’s life that He stood against racism through His encounter with the Samaritan woman at the well and His parable of The Good Samaritan. He shattered what was considered socially acceptable at the time.

Ancient Jews and Samaritans hated each other because Jews considered Samaritans to be racially inferior due to the fact that they weren’t of purely Jewish heritage and worshiped false gods. Jesus made it quite clear that He came so that the whole world would be redeemed in Him.

It is my belief that this attempt to remove statues, paintings, and any other artwork depicting Jesus is not about trying to eradicate white supremacy, but instead a removal of anything that is a symbol of religious faith or history as it is seen as a threat to those who seek to advance the worship of the State.

If the worship of Christ truly promoted an ideology centered around racism, then why were Christians at the forefront of both the abolitionist and civil rights movements in America? Consider the words of ardent abolitionist  Fredrick Douglass regarding the religion of Jesus Christ:

“What I have said respecting and against religion, I mean strictly to apply to the slaveholding religion of this land, and with no possible reference to Christianity proper; for, between the Christianity of this land, and the Christianity of Christ, I recognize the widest possible difference — so wide, that to receive the one as good, pure, and holy, is of necessity to reject the other as bad, corrupt, and wicked. To be the friend of the one, is of necessity to be the enemy of the other. I love the pure, peaceable, and impartial Christianity of Christ: I therefore hate the corrupt, slaveholding, women-whipping, cradle-plundering, partial and hypocritical Christianity of this land. Indeed, I can see no reason, but the most deceitful one, for calling the religion of this land Christianity. I look upon it as the climax of all misnomers, the boldest of all frauds, and the grossest of all libels. Never was there a clearer case of “stealing the livery of the court of heaven to serve the devil in.” I am filled with unutterable loathing when I contemplate the religious pomp and show, together with the horrible inconsistencies, which every where surround me. We have men-stealers for ministers, women- whippers for missionaries, and cradle-plunderers for church members.”

Notice Douglas loved the teachings of Christ and took issue not with Christ, but those who claimed to be His followers, and yet practice hypocrisy in regard to recognizing the humanity of black Americans and that God meant for all people to live free.

I don’t see an issue with different people of any ethnicity painting or representing Christ artistically in a way that he or she can identify with as all people are made in his image and likeness. God is more concerned about what is in the hearts of man than a physical representation of Him in art.

Joel Killion, author of “Jesus Unleashed”, summed up this issue concerning statues of Christ and His love for humanity accurately when I asked his thoughts on the entire ordeal, “First, Jesus wasn’t African, European, Asian or Hispanic. He was, historically, a Jew, a descendent of Abraham and David, of the line of Judah, through his mother. Second, his biological father was God the Holy Spirit; so, considering God is an omnipotent, omniscient, omnipresent, timeless and spaceless eternal Spirit, I’m pretty sure Jesus was much more than just a biological Jew. Third, personally, Who Jesus was inwardly, as well as what he said and did during the 3.5 years of his ministry, death, burial, and resurrection, was and is the purpose of his life. Focusing on his ethnicity misses the whole point and actually distorts his unifying message. Fourth, Jesus was the first-born of a new creation made up of people from every nation, tribe and tongue who trust him. He broke down every wall and made us one, but we can’t live this truth until we change our minds and attitudes. He formed our bodies from dust, and dust is what our bodies become after we die. He doesn’t see or judge us by the color of our dust. Instead, he who is Love itself sees our hearts and is inviting us into this same vision of one another.

May the Lord give us the strength to Love and endure this evil that is sweeping our land. Personally, I don't care what Christ looked like. I very much doubt he looked like the 'statues'. So, let's leave all the statues & pull down the hatred and ugliness in ALL of our souls. https://t.co/t9KWptta6j

It is times such at these that the many things could use some breaking and instead of statues, may I suggest that we start with our hearts, many of which seem to have turned to stone.