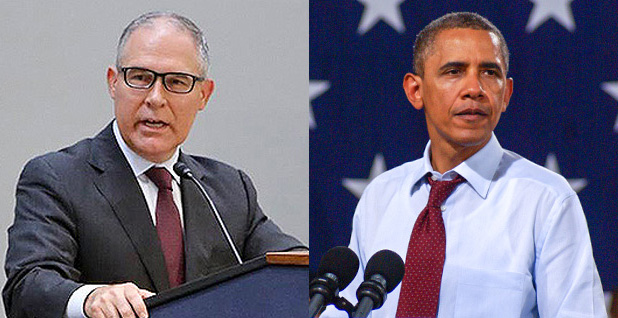 Pruitt, who sued the EPA more than a dozen times as Oklahoma’s attorney general, told reporters Wednesday that the Obama administration “deserved” to be sued for exceeding “their statutory authority.” He also said activists consistently gave the agency’s poor record on local environmental disasters a pass.

“What’s so great about that record?” he said, referring to the Obama administration’s handling of the Gold King Mine disaster and Flint water crisis. The EPA was roundly criticized during the latter half of former President Barack Obama’s final term for not reacting quicker on Flint.

The disaster Gold King Mine spill occurred when agency workers penetrated the mine in 2015, which unleashed three million gallons of toxic waste into the Animas River, poisoning drinking water for three states and the Navajo Nation.

Obama’s Justice Department refused to prosecute the employee responsible for the spill after the environmental agency Inspector General (IG) presented findings of a year-long investigation.

“I don’t quite understand the environmental left when they say that somehow what the past administration has done is so great,” he added. Democrats and activists praised Obama for spearheading policy measures such as the so-called Clean Power Plan and the Paris agreement, both of which were forged to fight climate change.

Pruitt said the former administration does not deserve the plaudits it has received, especially after the EPA’s failure to fix Flint’s water system.

Michigan officials were criticized last year for switching the small Eastern Michigan city’s water supply from Lake Huron to the Flint River in a bid to save money. But the state applied the wrong regulations and standards for drinking water, which ultimately resulted in corroded pipes and an increased level of lead.

Nearly 2,000 citizens in Flint affected by lead poisoning sued the EPA for failing to take the proper steps to ensure that state and local authorities were addressing the crisis. The defendants are seeking a civil action lawsuit for $722 million in damages.

Pruitt is trying to refashion the EPA, transitioning the agency from one that fights man-made global warming to one that protects human health and the environment. His comments on Friday come as rumors the EPA is considering scuttling East Chicago’s Region 5 office have continued to abate.