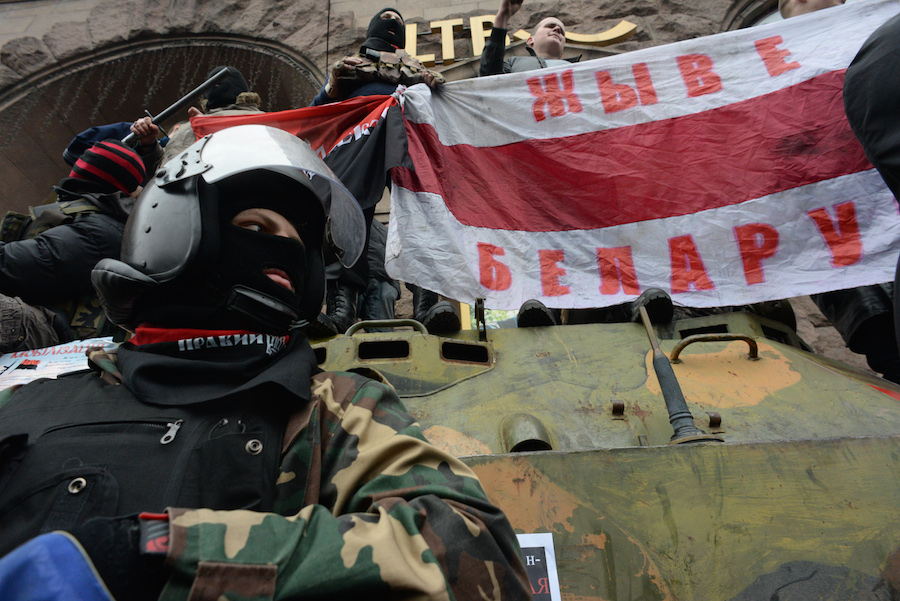 Ever since an uprising in Ukraine’s capital deposed corrupt Russian-backed President Viktor Yanukovych — and especially through the unrest and annexations that followed — Vladmir Putin’s state-run media has consistently labelled their Western-backed opponents Neo-Nazi fascists seeking to bring back the scourge of racial divisions to eastern Europe.

Which is what makes their reliance on the wife of a well-known American fascist and white nationalist to push anti-Kiev talking points rather perplexing.

On Monday night, Russian scholar Nina Kouprianova — who also goes by Nina Byzantina — appeared on the Putin’s English-language propaganda outlet “Russia Today” to discuss what the Kremlin calls a Ukrainian fascist massacre of over 40 allegedly pro-Russian supporters in the southern city of Odessa.

Kouprianova suggested the pro-European government in Kiev was “concealing the identities of the people” who participated in the killings — which RT consistently describes as members of “Right Sektor,” a supposedly Ukrainian fascist-nationalist group.

The segment fits into a broader anti-Kiev narrative being pushed across Russian media, meant to complement phony reports on buildings being constructed by the Ukrainian government “reminiscent of Nazi concentration camps.” In reality, construction of the buildings began under the pro-Russian government in 2012 to serve as temporary housing for illegal immigrants under E.U. regulations.

But regardless of whether “Right Sektor’s” involvement in the Odessa killings and the broader fight against Russian separatists can be proven, RT’s reliance on an American white nationalist to condemn the group speaks to the media organization’s lack of credibility.

Kouprianova is married to Richard Spencer, a former journalist who now heads the National Policy Institute, an explicitly white nationalist organization which seeks the forced Europeanization of North America.

“NPI is an independent think-tank and publishing firm dedicated to the heritage, identity, and future of European people in the United States and around the world,” Spencer’s website reads, while videos like “The Idea and Ideal of the Ethno State” and “American Nationalism: A European Perspective” further the perception of a group committed to a “racially pure” United States.

In a glowing profile published on the Neo-Nazi Wermod & Wermod Publishing Group’s website, a picture identifies Kouprianova as Spencer’s wife and shows her dining with British psychology professor Richard Lynn, who has been labelled a racist for his work linking ethnicity and race to intelligence.

Kouprianova also worked on translating Russian political scientist Aleksandr Dugin’s 2012 book “The Fourth Political Theory.” Dugin has been linked to a variety of nationalist and fascist groups in Russia. In 1997, Dugin extolled the virtues of a “genuine, true, radically revolutionary and consistent, fascist fascism” in Russia. He earlier wrote that “excesses of this ideology in Germany are a matter exclusively of the Germans, while Russian fascism is a combination of natural national conservatism with a passionate desire for true changes.”

So while tweeting videos on Ukraine with headlines like “Fascists Out!” and decrying alleged pro-Ukrainian fascists on RT’s airwaves, Kouprianova has little problem palling around, translating and even marrying fascists and white nationalists from other countries — including Russia.

Kouprianova seems to keep her association with Spencer and other white nationalists under wraps, perhaps making RT’s reliance on her analysis understandable. But for years, RT regularly featured Spencer himself on anti-American segments —  most recently in a clip attacking the U.S. for souring relations between America and Russia.

Revealingly, RT has not featured Spencer on any segments where it attacks purported fascists and racist nationalists in Ukraine. In fact, the Kremlin-backed network has not had Spencer on at all since the uprising.