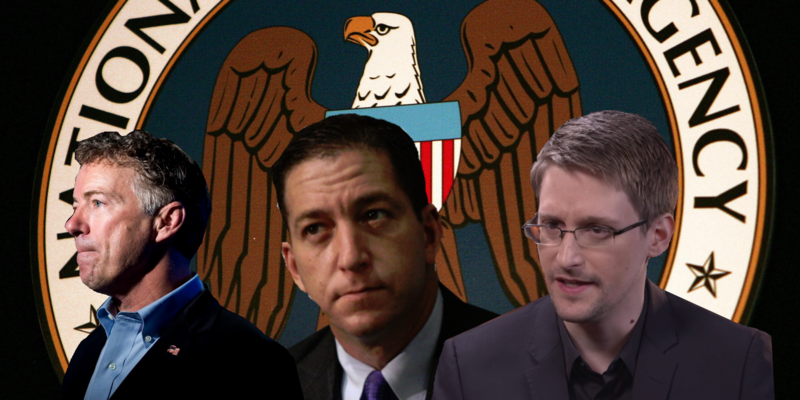 On Sunday, Sen. Rand Paul of Kentucky appeared on CBS’s “Face the Nation” where he explained that he believes everyone is missing the real story regarding President Donald Trump’s comments on wiretapping, reports the Washington Examiner.

Paul told John Dickerson, the host of “Face the Nation,” that Trump and those in his administration, may have been caught up in the wiretapping of foreign targets.

“I think everybody has been getting this story wrong,” Paul said.” “I doubt that Trump was a target directly of any kind of eavesdropping, but I’m not saying it didn’t happen. I think there’s a very good chance it does.”

According to the Washington Examiner, Paul noted that the wiretaps authorized under foreign intelligence laws targeted at foreigners often capture them communicating with U.S. citizens — what he referred to as a “backdoor search of Americans.” When that happens, the Americans’ communications are meant to be masked, but even low-level intelligence employees can unmask them, Paul explained.

“That’s probably what happened to Flynn,” Paul said, qualifying his remarks by saying that he has no inside knowledge of what happened. “They’re not targeting Americans, they’re targeting foreigners. But they’re doing it purposefully to get to Americans.”

Shortly following his comments, whistleblower and former Central Intelligence Agency employee Edward Snowden took to Twitter to say that the policy described by Sen. Paul is “is against policy,” but that many National Intelligence agents did it anyway.

This practice, called "reverse targeting," is against policy, but many DNI analysts at NSA did it. Only needed to deny it was the "intent." https://t.co/WgqkbfNkHI

Snowden then provided support for his claim tweeting about section 702 of the FISA Amendments Act, which allows the government to collect the content of electronic communications without any individualized court order if the “target” of the communications is “reasonably believed” to be a foreigner overseas, and if a significant purpose of the surveillance is to acquire foreign intelligence information, according to the BostonReview.net.

The NSA routinely reads Americans' communications without a warrant. They only need to say you're not the "target." https://t.co/NU8QFWgXpn pic.twitter.com/SMtFreia67

BostonReview.net, as cited by Snowden, explained:

Even though the target must be a non-citizen, programmatic surveillance under section 702 sweeps up all international communications to, from, or about the target. This includes communications coming into or out of the United States. Granted, the NSA may capture these calls and e-mails only if it intends to acquire “foreign intelligence information.” But the FAA defines this term so broadly—it encompasses any information relevant to the foreign affairs of the United States – that it would in theory permit the capture of almost all communications between Americans and their friends, relatives, or business associates overseas. The NSA refers to this as “incidental” collection, but there is nothing “incidental” about it. As officials made clear during the debates leading up to the enactment of section 702, communications involving Americans were “the most important to us.” 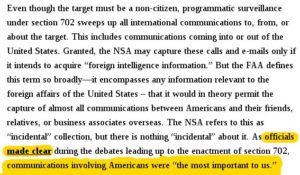 Snowden’s concern for section 702 was then validated by US Congressman Ted Lieu (D-CA) when he tweeted out.

Section 702 of FISA allows IC to capture info on US citizens w/o a warrant & have that used in court. We need to reform it.

Lieu was quickly retweeted by Snowden.

This is a current US Congressman (D-CA). He's right. https://t.co/LHNfONp1DG

As the comments from Sen. Paul gained more attention, the attacks and mocking of him mounted on Twitter. Prompting journalist Glenn Greenwald, to come to his defense.

Greenwald cited the American Civil Liberties Union (ACLU) Deputy Legal Director Jameel Jaffer’s letter to the Privacy and Civil Liberties Oversight Board at the Public Hearing on Section 702 of the FISA Amendments Act, from November of 2014

There's no doubt they do this. ACLU has long warned of it. Advocates of new FISA law said *said* it was key purpose https://t.co/LM4PQXIIbr https://t.co/sD7cQGqplX

Greenwald highlighted specific areas of the letter which spoke directly to what Paul warned. 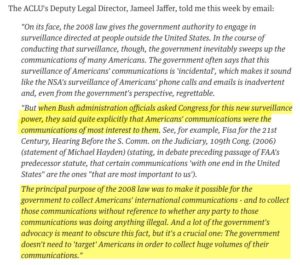 Here's ACLU's @JameelJaffer on how NSA can – *and does* – purposely monitor Americans' communications with no warrants (links above) pic.twitter.com/xBaf8uwZuD

With the fights over credibility and the inherent secretness of the government spying agencies it has become nearly impossible to get a clear answer on the truth. Especially since the comments from Sen. Paul happened to occur on the 4th anniversary of former Director of National Intelligence James Clapper telling the American people that the National Security Administration (NSA) was not spying on them.