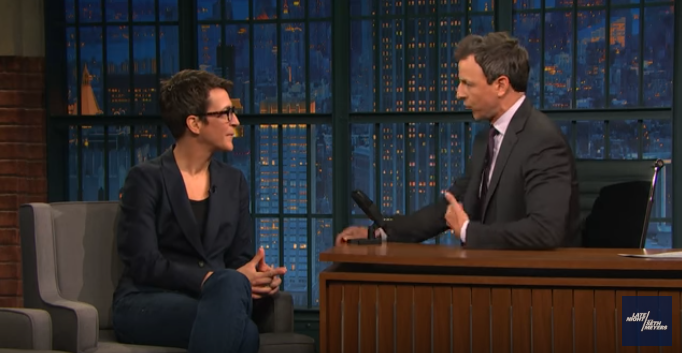 MSNBC political personality Rachel Maddow makes no secret of the fact that she enjoys the role of La Résistance against the Trump administration. And it appears that her doing so may go back further than once believed.

On an episode of  “Late Night with Seth Meyers,” Maddow recalled a phone call she once had with candidate Donald Trump in the early stages of his campaign, reports Mediaite.

“I talked to him during the primaries. He was an announced candidate,” said Maddow who added that the Trump team initiated the call as an off the record conversation as part of the groundwork to a planned larger interview. “I had this conversation with him .. I’d sort of said he had good chances against his Republican primary opponents and we kind of dished dirt on all the things he thought was wrong with all his Republican primary opponents.”

Maddow then explained that the preconceived interview never happened, and that Trump suggest that she use their phone call they had, which wasn’t recorded.

This prompted a conversation between Myers and Maddow on Trump’s relationship with the media during which Maddow said: “There’s never been a president who is more addicted to news about himself and who’s more response to the news that he supposedly thinks is so worthless. So it’s a weird tension. It’s a dangerous time for the first amendment and the free press in this country. At the same time, we’re oddly influential with the guy who wants to kill us.”

Accrual Accounting: The Hidden Tax That Needs To Be Shelved Forever

Christie Slams Marijuana Legalization As The Work Of ‘Crazy Liberals’

Hillary Promises Not To Leave Politics