New Yorkers in the wake of Hurricane Sandy lined up at pumps, waiting sometimes for up to six hours to receive gasoline during a shortage brought on by the disaster. Gov. Cuomo acknowledged there is a shortage of fuel, but said “there is no reason to panic.” It would seem natural that such a high demand after the hurricane would necessarily dwindle the supply. However, that might not be the only factor in why there is a shortage of critical fuel.

New York has enacted anti-price gouging laws stating that in effect, no business may increase prices more than 10% in the wake of a natural disaster. At the moment, there are reports to the New York Attorney Generals office that some prices are going over 30% for fuel at some stations and some citizens are complaining.

These laws aren’t exclusive to New York or New Jersey, for instance Maine has a law that prohibits “unjust or unreasonable profit” for necessities during a critical event. But what exactly is wrong with profit and who is to decide what is unreasonable? Are prige gougers villains taking advantage of people or are they heroes for providing important items and services to people in need at a price they are willing to pay?

The problem with this overly simplistic view of the economics of disasters is that, like in a free market, the price system and the free market at work helps to decide the best possible allocation goods and services. It does this by reacting to demand from consumers and responding to things like high demand with a higher price. Why it may be a good thing for someone to raise prices in a storm can be illustrated by this very simple example:

If you are a store owner and you sell power generators, you might see increased demand for generators after a major event like an earthquake or hurricane. If that event increased the demand for generators, prices would need to go up. The price going up sends a signal to the community that there is an immediate need for more generators. Now consider that an entrepreneur in Texas might also sell generators. She sees that the demand and price goes up in an area affected by the disaster. For her, there is no incentive (other than perhaps a charitable one) to move generators across the country at a loss if the cost of shipping those generators exceeds the price one could fetch. However, if prices are allowed to rise, suddenly the pricing incentive kicks in. The entrepreneur in Texas realizes she can now make a profit by shipping generators to the area of the disaster and thus more people can be served with critical goods and services, even if the prices are higher than they would have been had the storm not occured. 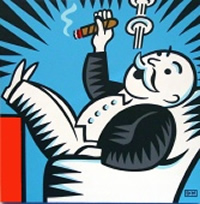 So the higher prices are not necesarily a result of greed on the behalf of the seller. Rather, they are a normal reaction to the increased demand for a good or service. That increased demand could be served better if the pricing system were allowed to work so that competitors for that good and service could move into the market and begin distributing the service or good to the communities that are affected.

Attempting to artificially keep prices down negatively affects the supply. Business owners who can’t make a profit, can’t buy more of the necessary item. If they were allowed to make bigger profits, they could get more of the needed item to the market. More profit means more investment and more opportunity to serve the market. So in effect,  a “price gouger” who raises prices and makes more profit during a disaster actually is serving the community. And the pricing system is giving more entrepreneurs a chance to come in and compete, which of course, lowers the prices.

So, what do you believe? Are business owners who raise prices “gougers” or are they entrepeneurs reacting in a natural way to a natural disaster? Leave your comments below.

Is the individual supreme?

Voting and Compromise in the 2012 General Election